END_OF_DOCUMENT_TOKEN_TO_BE_REPLACED

Cooking a succulent sirloin steak at home is easier than you think!

Our Pan-Seared Sirloin Steak is cooked over high heat, and basted with butter, garlic and herbs. This juicy, melt-in-your-mouth steak is amazing! 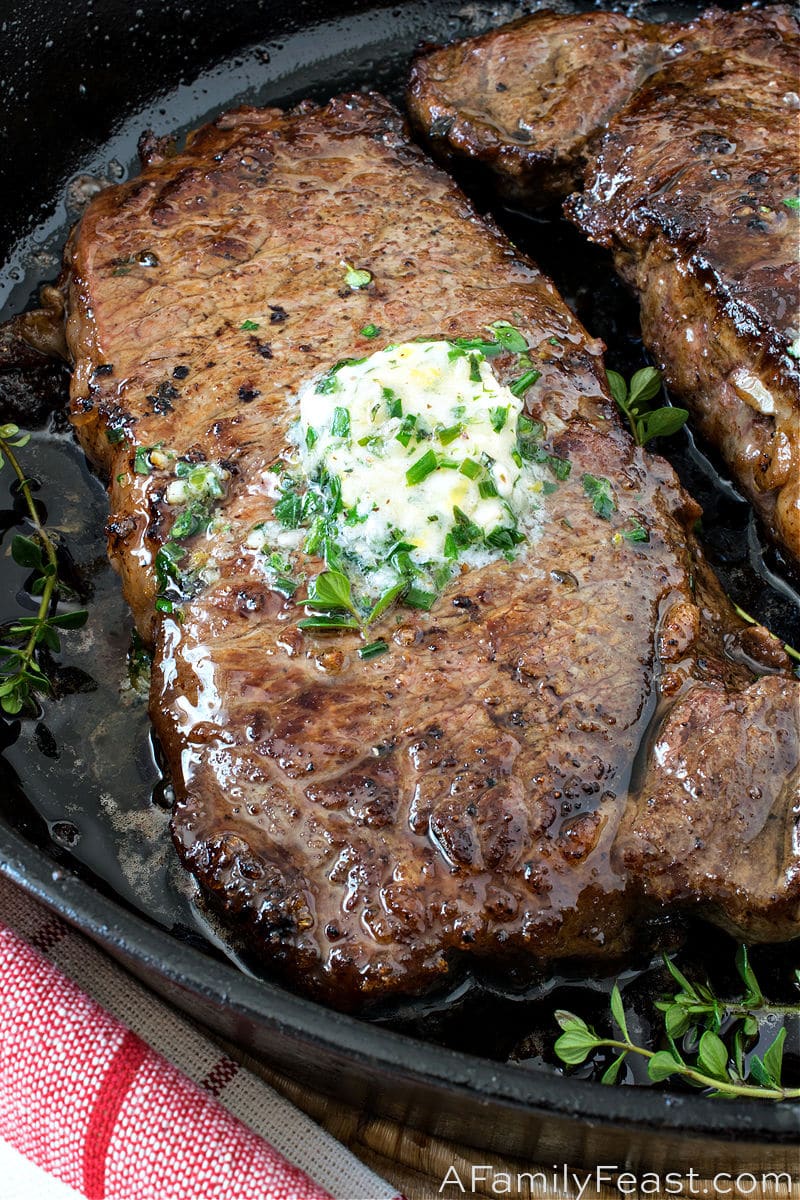 Today’s Pan-Seared Sirloin Steak is one of those dishes that everyone should have in their go-to recipe collection. If you follow all our tips and tricks below, your steak-loving dinner guests are sure to sing your praises – and you’ll be forever-known as someone who knows how to cook a really great steak!

Chef’s Tip Our photos show a sirloin strip steak, but this cooking method works for any sirloin cut. 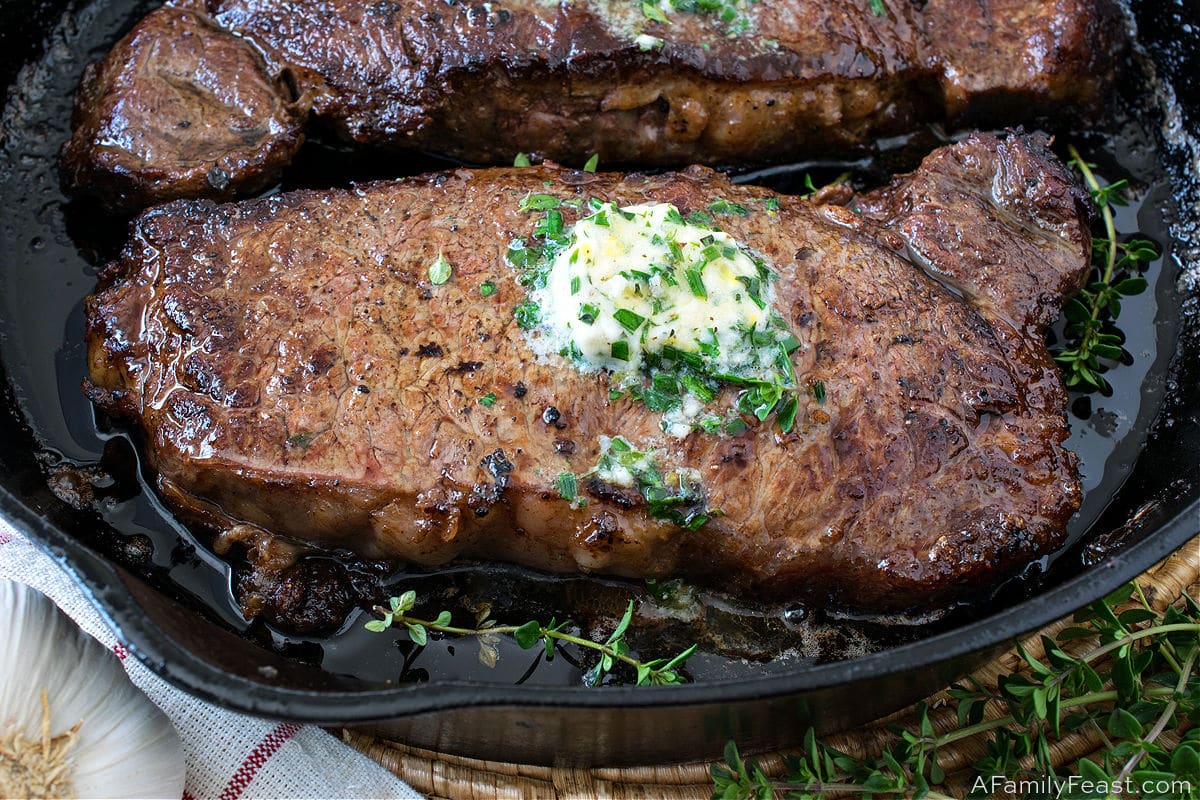 The secret to achieving that pan-seared, masterpiece-on-a-plate is to buy a good quality cut of beef. Here’s what to consider: Marbling – These are the tiny spider veins of fat that run through the meat. When you shop for beef, it is labeled with ‘grades’ – from lowest to highest the beef ranks as Select, Choice, and Prime – and the grade reflects the amount of marbling. The more marbling your steak has, the more tender and flavorful your steak will be.  Ideally, you should avoid cuts that have large pieces of fat on the outside, or gristle running through the meat as well. Choice grade beef is the most widely available at supermarkets – and it’s what we show in our photos. We found a great deal on sirloin strip steaks with nice marbling at our local club store. Having said that, if your budget allows, choose a hand-cut Prime steak, and/or look for Certified Angus Beef. The flavor will be even more delicious – but we can vouch for the very delicious flavors of the Choice sirloin strip steaks in our post today. Cut – The cut of beef you choose will also impact the tenderness and flavor of your cooked steak. Thickness – We recommend a steak that is at least 1 – 1½ inches thick. You’ll get a nice sear on the outside, and still retain the ability to cook the inside to your preferred level of doneness. (The recipe below is written for this thickness; if you buy a thicker cut the cooking time will be longer.) Get Expert Advice – Your local butcher can help you choose the perfect cut based on your recipe and budget. Note that meat packaging at the supermarket is sometimes hard to decipher. In their defense, the different cuts of beef are confusing – and that can sometimes result in mislabeled packages. If you don’t have a local butcher, try asking the meat counter associate at the supermarket to help you find the perfect cut. At the very least, look for ‘choice’ grade meats. Aged Beef – If you don’t mind paying top dollar for really superior meat, some specialty butcher shops sell aged beef. These cuts have been placed in a climate-controlled space for days, or sometimes up to weeks. This process of aging the beef removes excess moisture and results in a more intensely-flavorful steak. 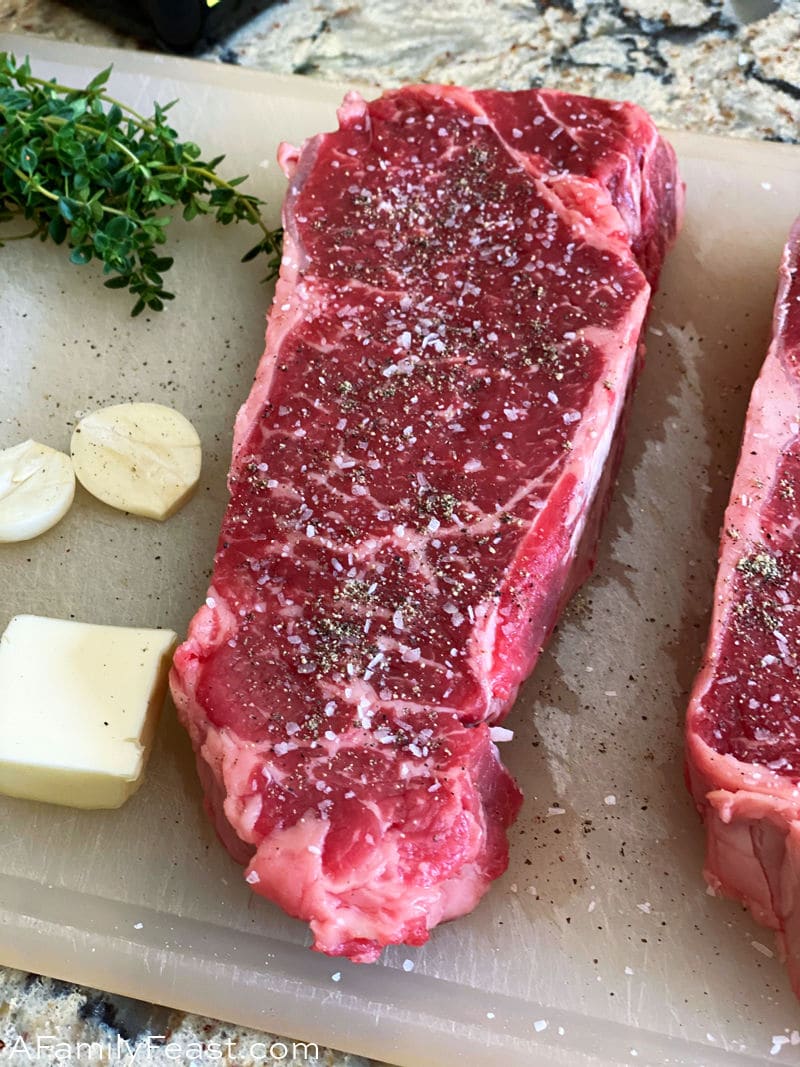 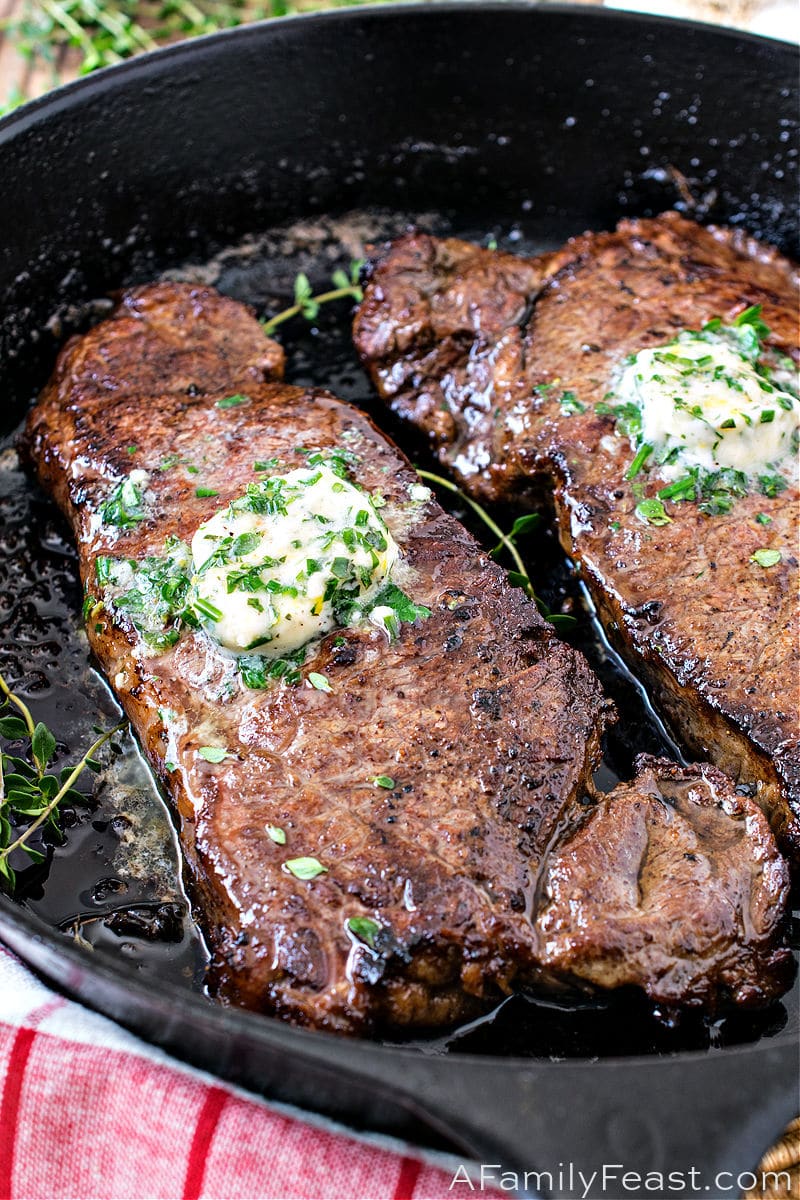 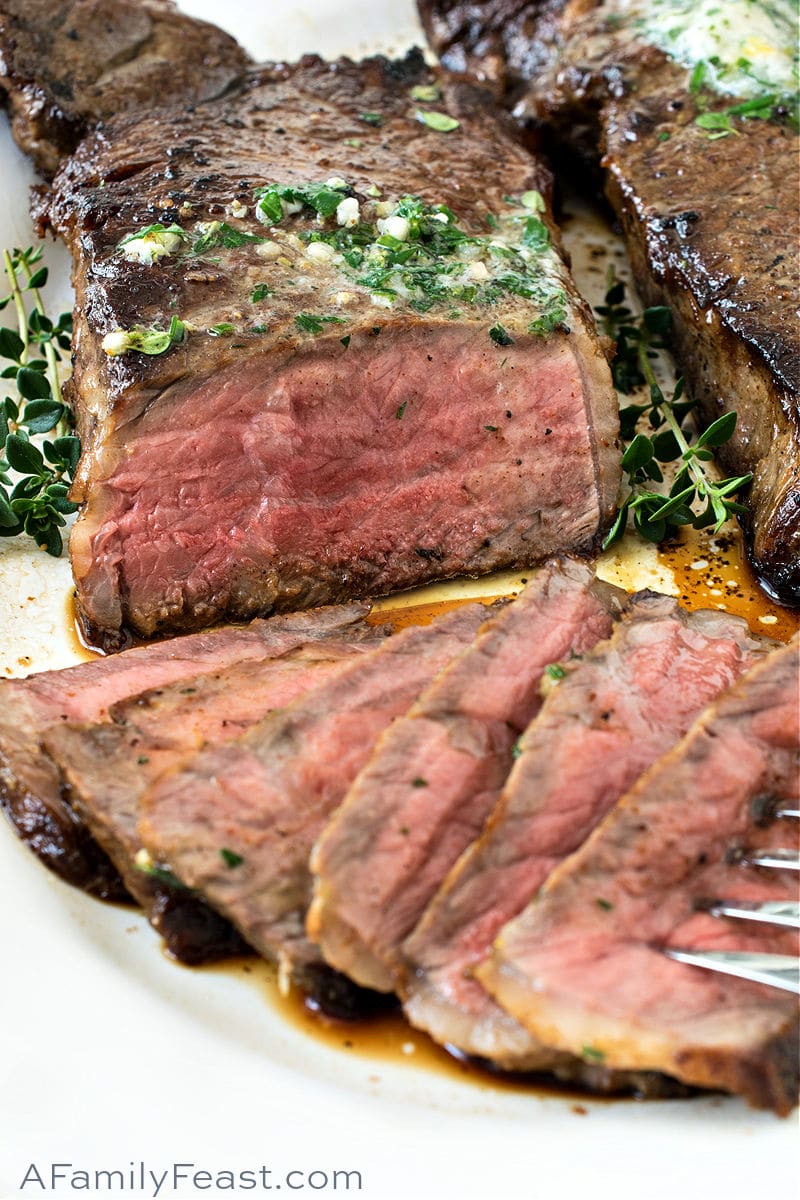 How Do I Make Pan-Seared Sirloin Steak? 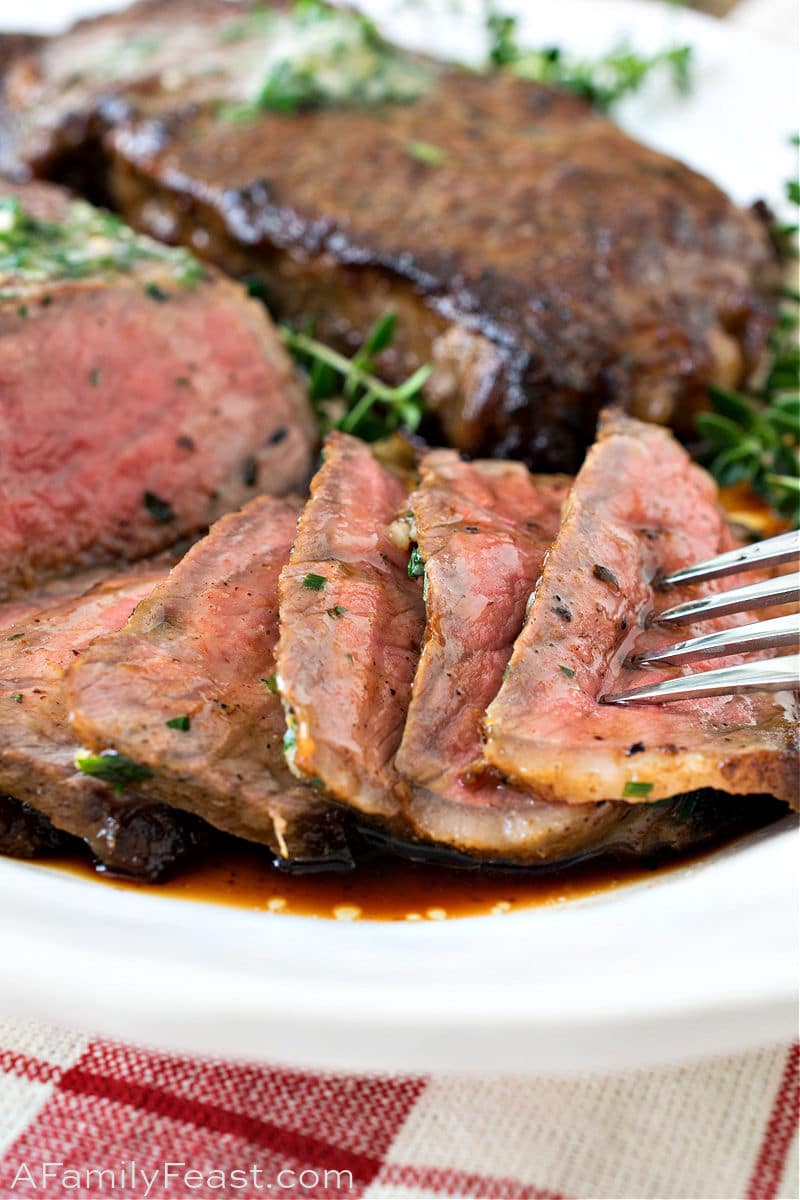 You may enjoy these other steak recipes:

2 16-ounce sirloin strip steaks, each between 1 and 1 ½ inches thick

2 large garlic cloves, peeled and split in half

Remove steaks from the refrigerator 30 minutes before cooking. Let sit at room temperature until ready to cook.

Brush the hot pan with the vegetable oil.

Salt and pepper one side of the steaks, then place seasoned side down into the pan. Season the other side (now facing up) with more salt and pepper.

Time the steaks for two minutes, then flip the steak with tongs. Add the butter, olive oil, thyme and garlic to the pan and cook two more minutes while basting continually with a long-handled spoon.

Flip again and cook for two more minutes, still basting as you cook.

Flip one last time and with tongs, remove and discard garlic and thyme.

At this point, pick a steak up with tongs and insert a probe thermometer in through one side. 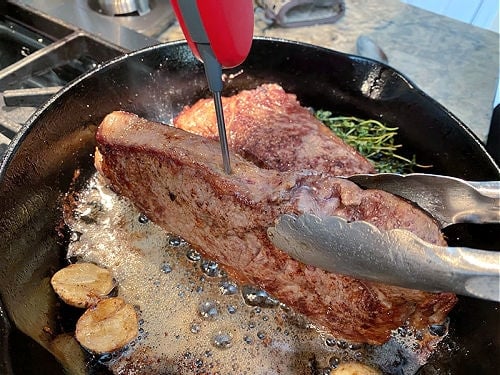 Our one-pound steaks, 1 ¼ inches thick to start, reached 134 degrees F after seven minutes. We removed them to a platter, covered loosely with foil and set the timer for ten minutes. Then we moved them to our cutting board, and started slicing from one end to the other on a bias cut with a long-bladed slicing knife.

Any residual juice left in the platter should be poured or brushed over sliced portions. 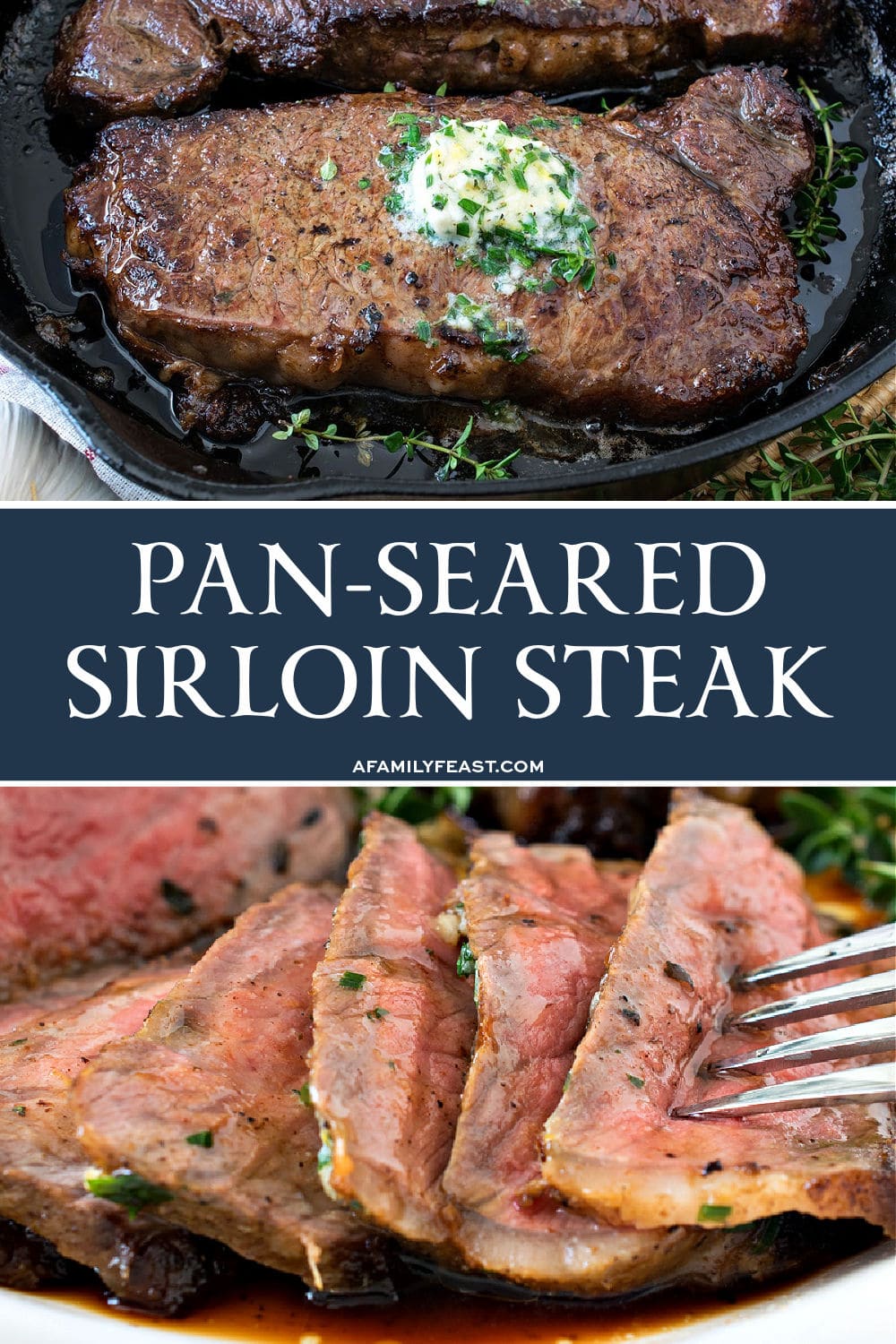 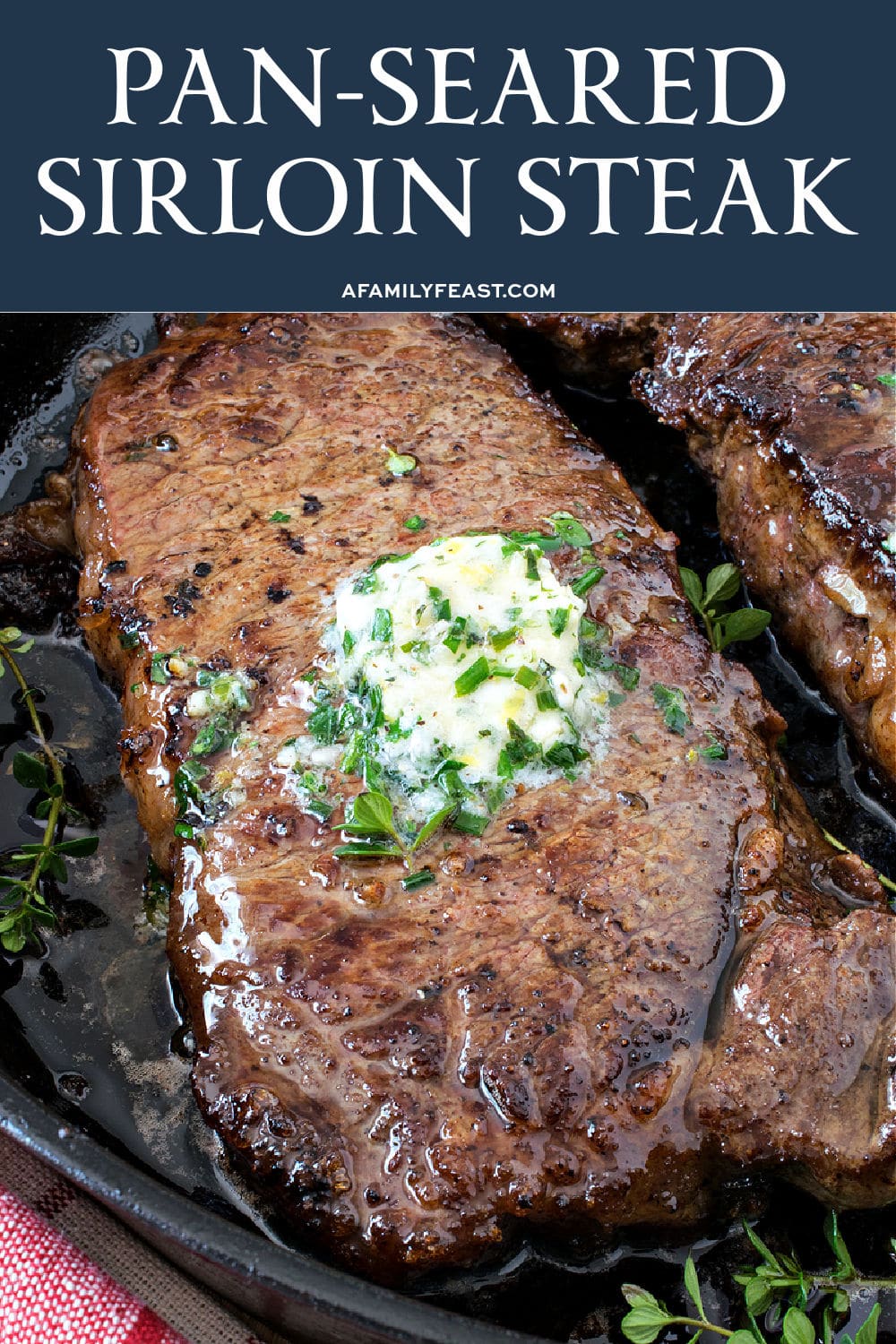 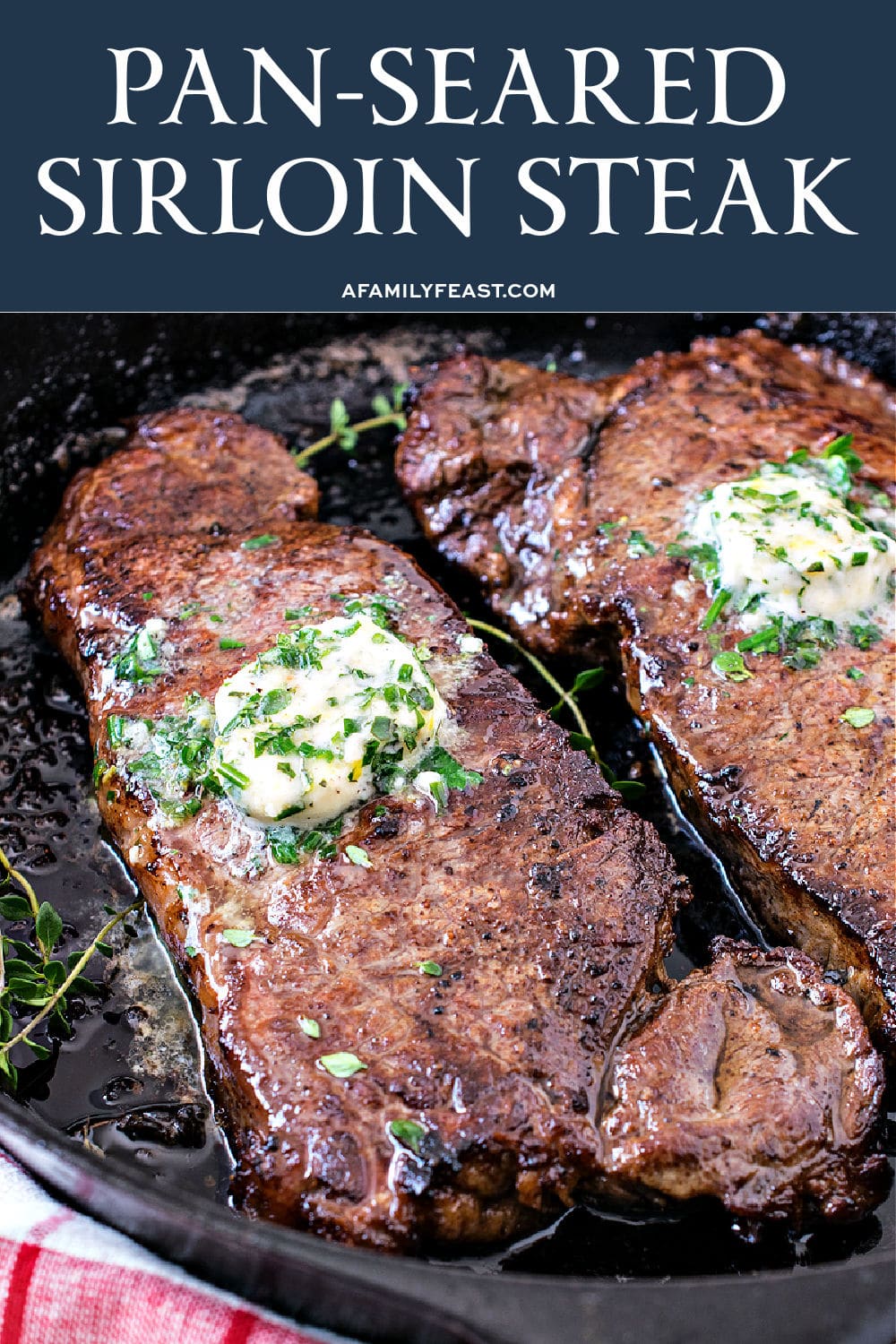 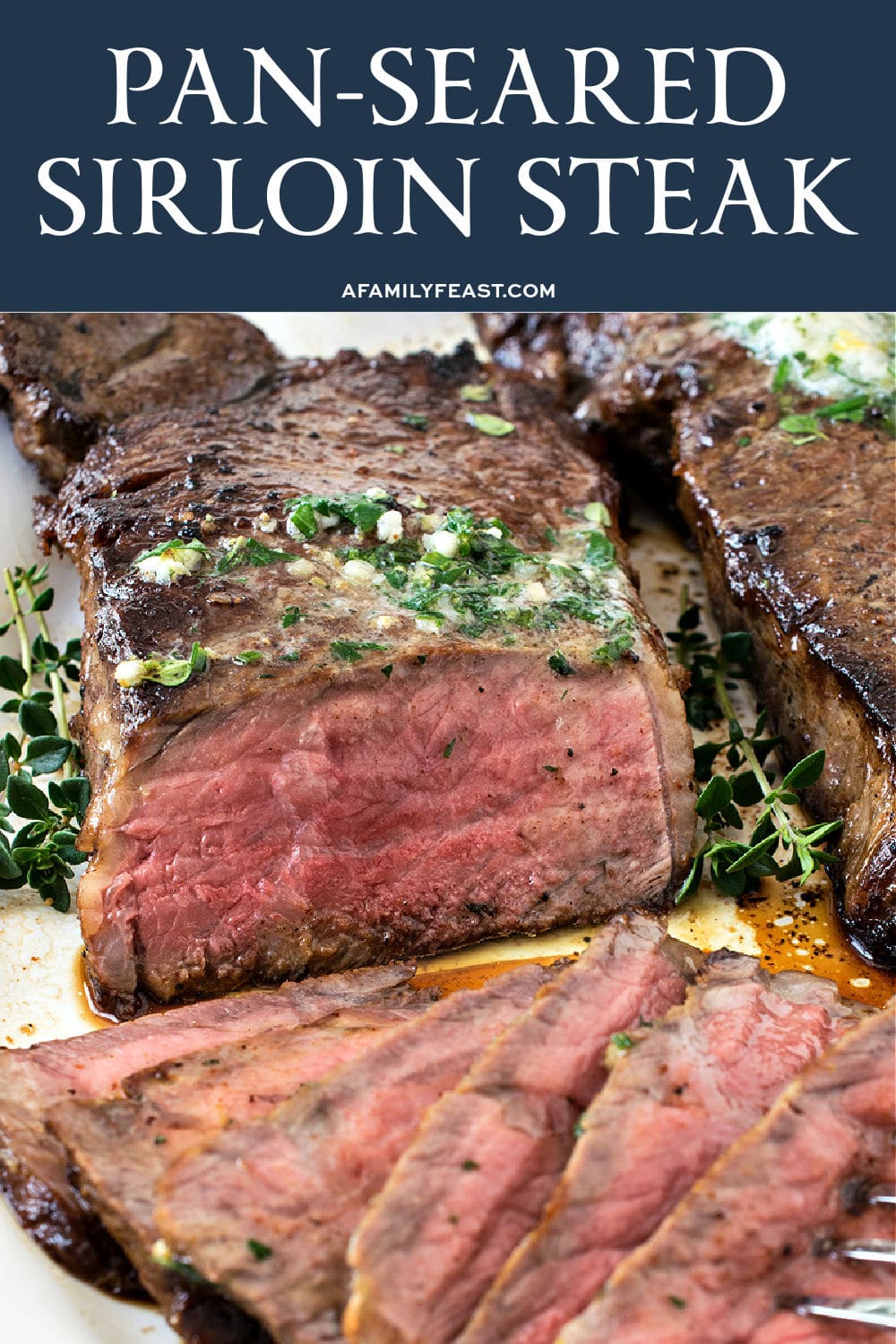 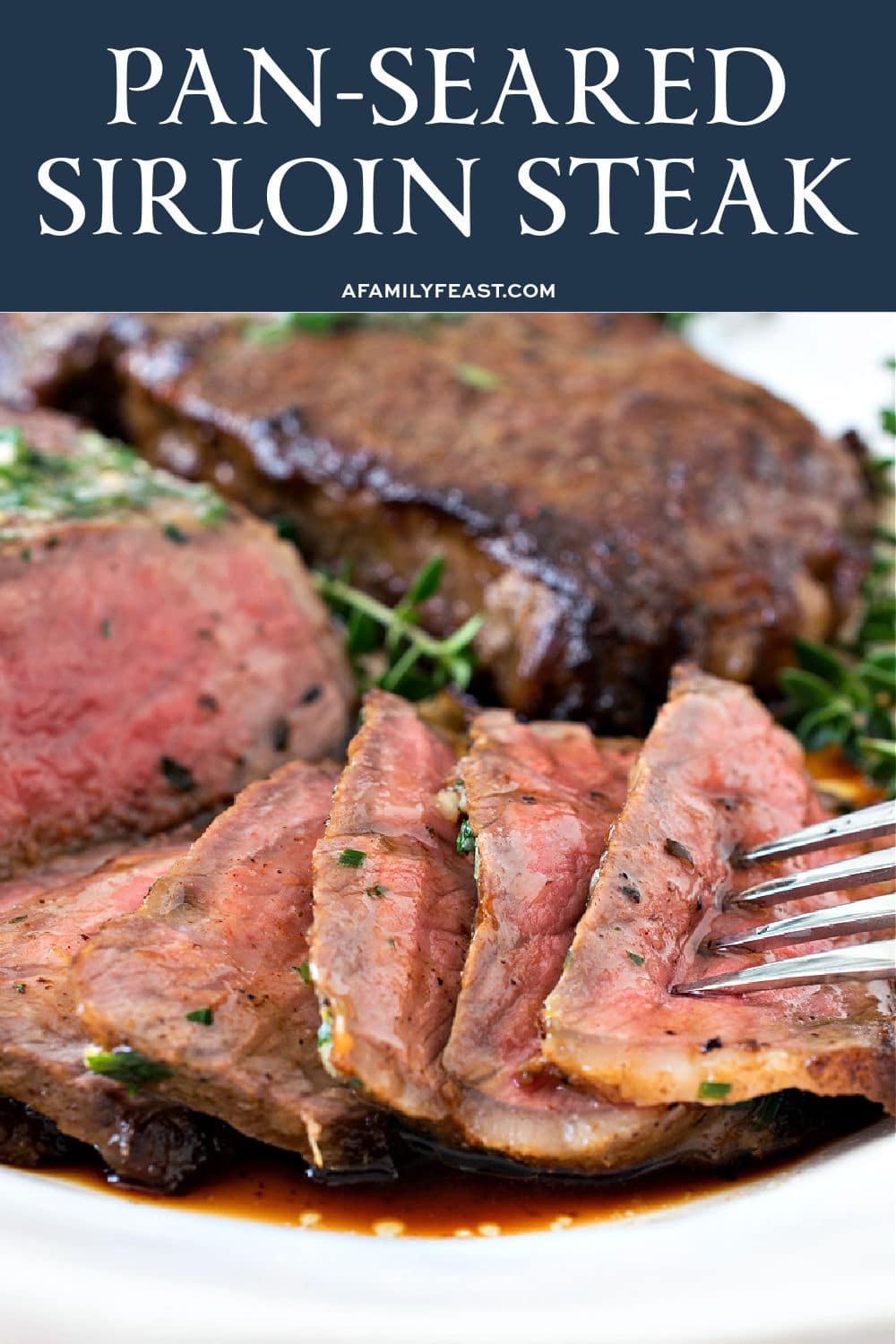