END_OF_DOCUMENT_TOKEN_TO_BE_REPLACED

Delicious cinnamon rolls without all the work!

Easy Puff Pastry Cinnamon Rolls have a sweet brown sugar and raisin filling inside rolled puff pastry that bakes up light and crispy. A vanilla-infused glaze tops things off.

Craving sweet cinnamon rolls but not up for a lot of work? Our Easy Puff Pastry Cinnamon Rolls are the answer!

After just fifteen minutes of prep and a quick bake in the oven – you’ll have the heavenly aroma of sweet cinnamon rolls filling your kitchen!

(If you have the time and want a softer, yeast-based cinnamon roll – check out our Cinnamon Rolls with Bourbon-Soaked Raisins instead.)

How do I make Easy Puff Pastry Cinnamon Rolls?

Chef’s Tip – Thaw the boxes of pastry sheets in the refrigerator overnight so they are completely and evenly thawed. You could also remove the frozen sheets and thaw on your counter before unfolding and piecing together.

Can I make Easy Puff Pastry Cinnamon Rolls ahead of time?  Yes, you could form rolls and place them on the sheet tray. Refrigerate the pans until ready to bake. Bring to room temperature before baking.

How do I store leftovers?   Baked and leftover puff pastry cinnamon rolls should be sealed in an airtight container. Then store at room temperature for up to two days. Note that these cinnamon rolls really are best when they are freshly baked so only bake as many at a time as you plan to eat, or eat the leftovers as soon as possible.

How do I reheat leftovers? As noted above, freshly baked is best. You can gently reheat leftover cinnamon rolls wrapped in foil in a warm oven, but avoid reheating so much that they dry out.

Can I freeze these cinnamon rolls?  We don’t recommend it.

You may enjoy these other recipes:

All-purpose flour to dust the counter

Preheat oven to 400 degrees F with two racks about top third and bottom third of oven.

If you haven’t already, thaw the four sheets of puff pastry and once thawed, unfold.

Place raisins in a microwave safe bowl, cover with water and microwave for one minute. Cover the bowl with a plate and let sit while you work on the rolls.

Flour the counter and lay the sheets out 2×2 per the picture below.

Brush the edges and press the four pieces together to make one large square sheet. 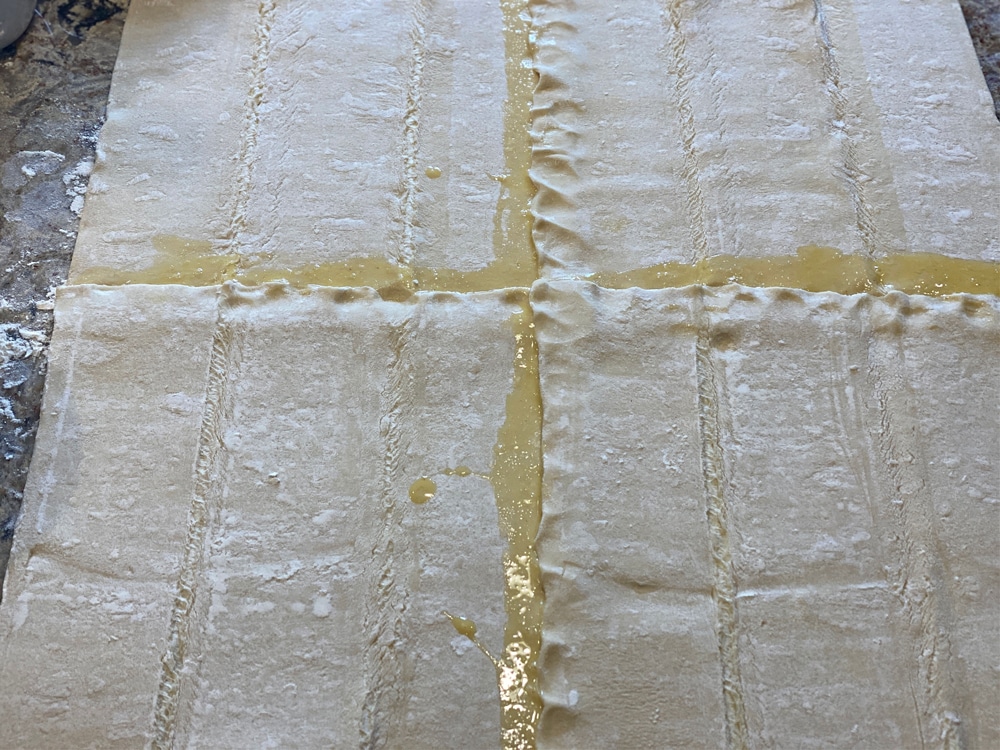 Brush egg over the entire surface, saving a little bit of the beaten egg to brush after they are rolled and cut.

Mix the brown sugar and cinnamon together in a bowl and sprinkle over the entire surface, leaving one inch on one end with just the brushed egg showing.

Drain and squeeze out the water from the raisins and sprinkle over the surface.

Place eight on each prepared pan, cut side up, while shaping into a neat round shape. Press each one down just slightly then brush each one with the remaining egg.

Bake for 15 minutes, rotate and swap rack positions then bake for 10-15 minutes more or until lightly browned on top. Ours took 28 minutes exactly.

Remove to a cooling rack that is sitting over a parchment covered sheet tray.

In a small bowl, mix powdered sugar, vanilla and milk and drizzle over the cooled rolls and serve.