Serve this easy side dish at your next Tex-Mex dinner!

Southwestern Potatoes are tender little potatoes coated in a rich and mildly-spicy sauce, then topped with Cojita cheese and cilantro.

Over the last year or so, my husband Jack has been experimenting with lots of different recipes that use dried chiles. I’m talking about those shrink-wrapped packages you often see in the produce aisle at the supermarket.

Neither of us grew up cooking with dried chiles – but after making this Southwestern Red Chile Sauce and our Chile Colorado – they aren’t as intimidating of an ingredient as we once thought.

How do I cook with dried chiles?

These Southwestern Potatoes use California chiles (also called Anaheim chiles) – which are very flavorful, but quite mild in terms of spiciness. (Like any of the dried chiles you can buy, just cut off the top stem, remove the seeds and inside ribs, then soak in hot water to rehydrate and soften or rehydrate according to your recipe.

In the case of today’s recipe, you’ll cut the California chiles into smaller pieces, then simmer the pieces in a pan with sauteed onions and garlic and some of your potato cooking water. After about twenty minutes, puree the mixture into a rich, red sauce.

Next, add cooked, little, yellow potatoes to a buttered skillet and season with salt and pepper. Cook until the skins of the potato start to brown. Then top with the red sauce to coat.

How do I serve Southwestern Potatoes?

Pour the sauced potatoes into a serving bowl, then sprinkle with crumbled Cojita cheese and fresh chopped cilantro. Serve while hot with Carne Asada or Chili Lime Steak Bites.

You may enjoy these other Southwestern-inspired dishes:

Place whole little potatoes in a large sauce pan and cover with water.

Bring to a boil and add the kosher salt then simmer 20-25 minutes until tender.

Reserve one cup of the potato water and drain the rest by pouring potatoes into a colander.

While potatoes are cooking, cut the dried peppers down the center from top to bottom, then discard seeds, stem and veins. Cut each pepper in half across the middle so you have four pieces per pepper. Set aside.

In a small saute pan over medium heat, melt 3 tablespoons of the butter and add the onion and garlic and cook until tender, about four minutes. Remove from heat and add in the dried pepper pieces.

Once the potatoes are cooked, pour off one cup of the water and put in the pan with the peppers and onion and cover tightly with a lid. Set your timer for 20 minutes.

After 20 minutes, puree the contents of the pan either in a blender or with an emersion blender. Set aside.

Add the cooked potatoes, salt and black pepper and cook and toss for five minutes until they start to brown.

Add the pureed liquid (the mixture will bubble and splatter), and continue to cook for another five minutes until the liquid starts to evaporate and thicken and coat the potatoes.

Serve topped with the crumbled Cotija cheese and chopped cilantro. 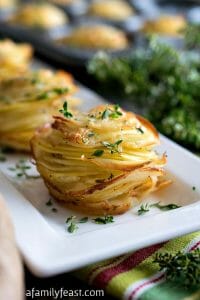 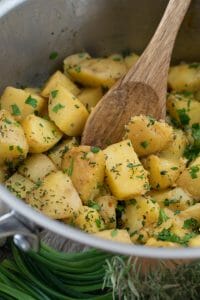