Make this easy and delicious chicken dish for dinner tonight!

Russian Chicken has tender pieces of chicken and in a citrus-infused butter sauce.

Hi Everyone – Jack here.  I’ll be the first one to admit that I sometimes go down the ‘rabbit hole’ of watching various videos on Facebook – especially when I’m killing time, waiting for my daughter’s swim practice to end.

A few weeks back, I was watching a video of someone outside in the snow, cooking a dish called Russian Chicken. He was cooking it over a hot campfire in a big cast iron pot. It looked delicious – so I decided to try making a simplified version for indoor cooking.

(Full disclosure: I have no idea what makes this a Russian recipe. I actually couldn’t understand a word the guy in the video was saying – but cooking is a universal language as far as I’m concerned. I was able to follow along to get the general gist of the recipe.)

This Russian Chicken is a fairly simple recipe. It has a combination of cut-up, bone-in chicken, navel oranges, Granny Smith apples and sweet onion. (We used Vidalia.) Start-to-finish, this recipe takes about an hour: half an hour to prep and chop, and another half hour to cook.

The flavors in this dish are delicious – and really interesting! The apples and oranges add a nice sweetness to an otherwise rich and savory butter sauce, and the chicken pieces cook up tender and juicy.

For serving, there is a generous amount of sauce to serve with the chicken, so grab a spoon and some nice crusty bread – and call it dinner.  (Best of all – you won’t need to go out in the elements to cook up this delicious dish for your family.)

You may enjoy these other chicken dinners:

You will need a large heavy wok or a cast iron skillet along with a large Dutch oven. (This can all be done in the Dutch oven, it’s just easier with two pans.)

4 large Granny Smith apples, cored and cut into eights. Keep in a bowl of water with a little lemon juice to stop them from turning brown until ready to use.

Rinse the chicken pieces then pat dry with paper towels. Salt and pepper both sides of each piece.

Heat the large wok or cast-iron pan over high heat.

Add the butter and oil and once melted and hot, place half the chicken pieces in the hot oil to sear, skin side down. Turn after 4-5 minutes or once the skin is crispy and cook on the other side for another 4-5 minutes.

While the first batch of chicken is cooking, line the bottom of the Dutch oven with half of the apple pieces but do not turn on the burner yet.

Place the seared chicken over the top of the raw apple wedges in the Dutch oven.

Cook the second half of the chicken as before, searing on both sides. Only this time, set this second batch aside.

Keep the pan hot and add the onions and orange strips and cook just until the onions start to soften, tossing and stirring often.

Use a slotted spoon or spider and remove half of the cooked onion/orange peel and spread over the chicken in the Dutch oven. Move the rest to the platter with the second batch of chicken and set aside.

While the apples are cooking, layer the second half of the seared chicken in the Dutch oven and top with the rest of the onion mixture and once the apples are done, lay those over the top.

Deglaze the pan you just cooked the apples in with the white wine, scraping any brown bits from the bottom and pour over the chicken in the Dutch oven.

Also pour in the squeezed orange juice and bring the Dutch oven to a boil.

Cover, lower to low heat and cook until the thickest chicken pieces register 160 degrees F with an instant read thermometer, about 12-15 minutes.

Remove chicken pieces to a platter and cover with the apples and onions and serve with some of the liquid on the side. 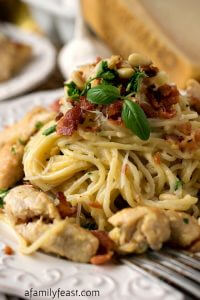 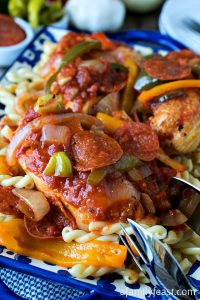