Meat Lover’s Pizza has a crispy crust topped with ground beef, sausage, bacon, pepperoni, and ham. Grab some napkins and dig in!

Skip calling for takeout – make this homemade Meat Lover’s Pizza instead! It’s loaded with all of your favorite toppings – and it’s the perfect choice to serve on pizza night, at a game day party, or anytime you are craving some seriously good pizza.

This Meat Lover’s Pizza recipe makes two fourteen-inch pizzas – but feel free to cut the recipe in half if you are feeding a smaller crowd.

We started with a few time-saving shortcuts: store-bought, refrigerated pizza dough from our local supermarket’s deli, and jarred pizza sauce. (If you want to go all-homemade – you can make our Perfect Pizza Dough and our Easy Pizza Sauce instead.)

In a little olive oil, sauté onions and garlic that have been seasoned with basil and oregano – just long enough to remove the rawness. Set aside in a bowl.

Then begin assembling your pizza – sauce, mozzarella cheese, cooked vegetables, all of your prepared meats, then a generous amount of grated Parmesan cheese on top.

How to get super crispy pizza

Your best option to achieve a wonderfully crispy crust on your Meat Lover’s Pizza is by using a pizza stone in the oven. We recommend a large rectangle-shaped pizza stone which gives you more options for baking pizza, bread, calzones, and other recipes.

You’ll want to bake your Meat Lover’s Pizza at a high temp of 550 degrees F (or higher) – so it’s important to allow the oven and pizza stone to fully come up to temperature.  As you slide the assembled pizza onto the hot pizza stone, the bottom crust will immediately start to bake and crisp right up.

Your Meat Lover’s Pizza will only take about 7 to 10 minutes to bake up nice and bubbly. Carefully remove your pizza onto a pizza pan and cut into slices for serving.

You may enjoy these other pizza recipes:

1 large onion, diced into half inch pieces (about 1 ¼ cups)

Flour, for your counter

Place a pizza stone in the bottom rack of your oven and turn oven to 350 degrees F. You will turn the oven hotter further into the recipe, the initial heat is to get the stone hot.

Remove pizza dough from refrigeration and let sit on your counter, covered.

In a medium to large saute pan, over medium heat, add one tablespoon of the oil and once hot, add the onions and cook for three minutes.

Add the garlic, basil and oregano and cook one more minute. Remove to a bowl.

Heat saute pan back up and add one more tablespoon of oil and the ground beef and cook to brown, breaking up into small pieces as it cooks. Once browned, strain off and discard grease and set cooked beef aside in a small bowl.

Keep pan hot and add the remaining oil and the Italian sausage and cook, breaking up into pieces as it browns. Once cooked, strain off and discard grease and set cooked sausage aside in a small bowl.

Using the same pan, cook the bacon until just shy of crisp and still a little chewy. Discard fat and place cooked bacon on paper towels to drain. Cut into one inch pieces. Set aside.

Optional step…I like the taste of pepperoni but dislike the greasy texture once cooked. So, I place the sliced pepperoni into the same hot pan and cook for 30 seconds just to render off some of the fat, then pat the slices dry between paper towels. This optional step makes the finished pizza less greasy but it does dry out the pepperoni slices a little bit. Your choice on how to prepare.

At this point, bring your oven up to the hottest temperature possible. I set ours to 550 degrees F while I prepared the rest of the pizza.

Working on one pizza at a time, flour your counter and stretch and roll your dough to 14 inches round. If you purchased the 16-ounce dough balls, you may only get them to 12 inches, which is fine.

Sprinkle coarse corn meal onto your pizza peel and transfer the stretched dough circle to the peel. The corn meal helps the finished pizza slide off of the peel and onto the stone. Practice sliding the dough on the corn meal covered pizza peel before you top it to get used to the process.

Spoon half the sauce onto the dough, leaving about a half inch of the outer edge free.

Sprinkle on half of the mozzarella.

Sprinkle on half of the onion/garlic mixture.

Sprinkle on half of the cooked beef, sausage and bacon.

Sprinkle on half of the pepperoni and ham then top with half of the grated Parmesan cheese.

Once the oven is at temperature, slice the pizza from the peel to the stone in a few quick jerks.

Depending on your oven, the pizza will take between 7 and 10 minutes to cook. Use tongs to lift an edge to check the bottom. The top should be browned and melty.

When ready, grab an edge with the tongs and slide onto a pizza pan. Then transfer the pizza from the pan to a cutting board, cut and serve. 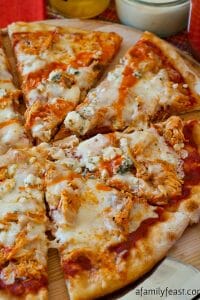 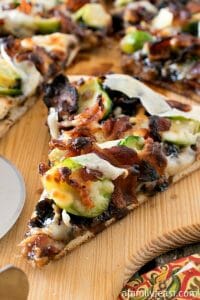 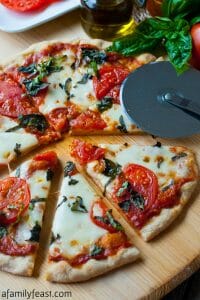