END_OF_DOCUMENT_TOKEN_TO_BE_REPLACED

The classic icebox cake just got even more delicious with the addition of Nutella and toffee bits! (YUM!)

Our easy and delicious Chocolate Nutella Icebox Cake has layers of Nutella-infused whipped cream, toffee bits and chocolate wafers. This is one heavenly dessert! 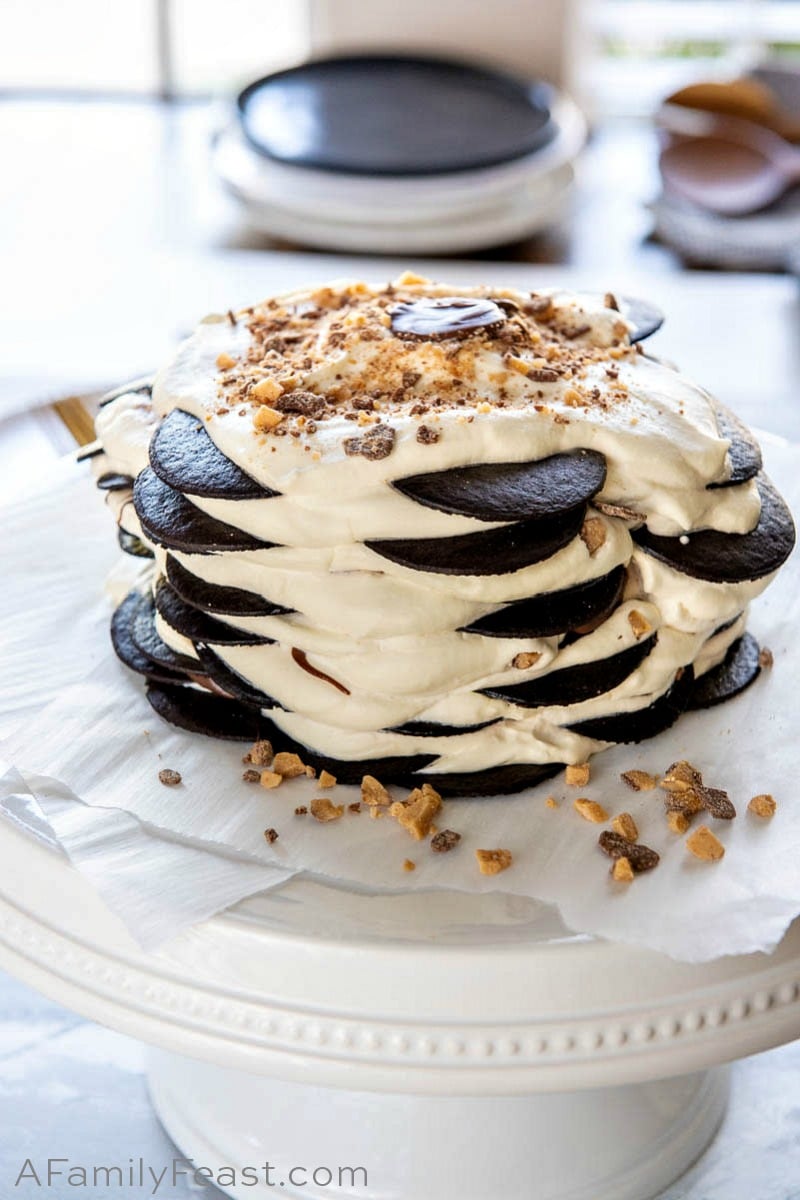 This recipe for Chocolate Nutella Toffee Icebox Cake is an amped-up version of the classic Nabisco Famous Chocolate Wafer icebox cake recipe that has been around for decades.

The original version is amazingly good – pillows of soft whipped cream surround and soften the chocolate wafer cookies to perfection as they chill overnight. It’s so easy to make – and seriously delicious! 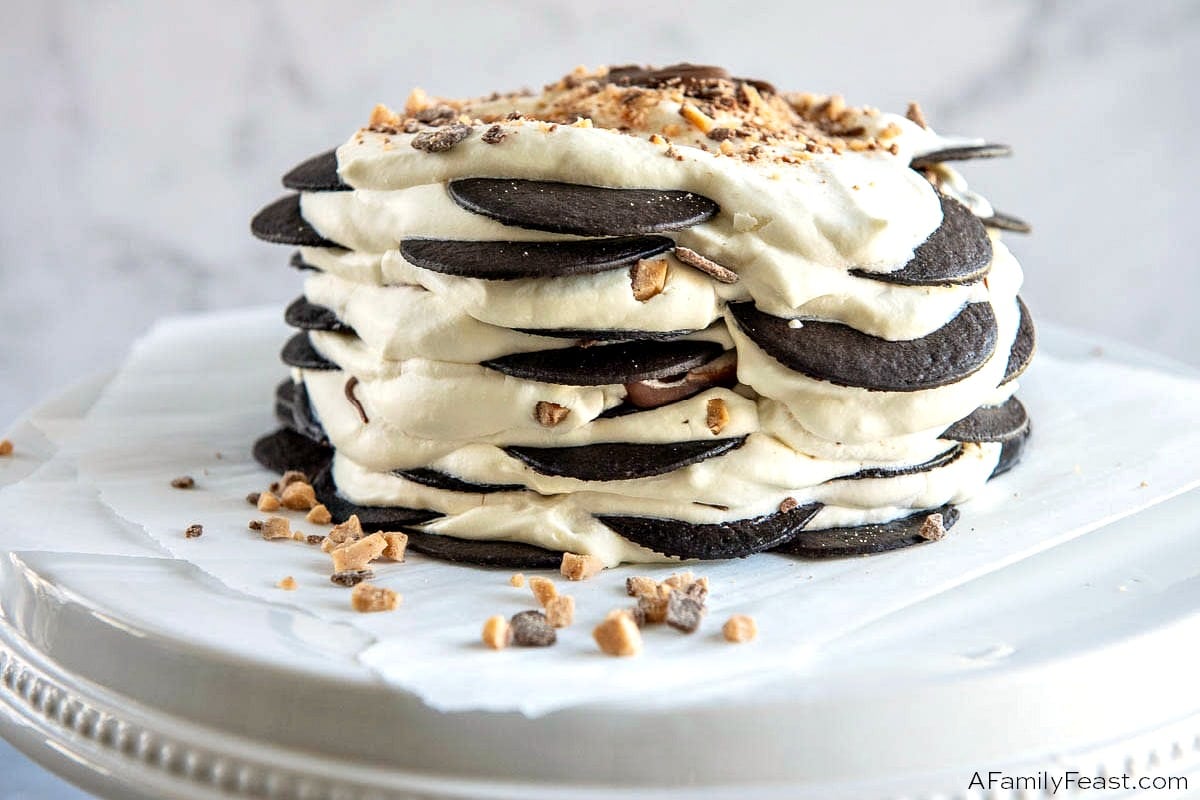 In our version today, we’ve added drizzles of Nutella and sprinkles of Heath Toffee Bits among the layers to add even more delicious flavor, plus a little bit of crunch.  (Let’s just agree that this is a dessert for one of those days when you aren’t worried about counting calories or fat grams!) 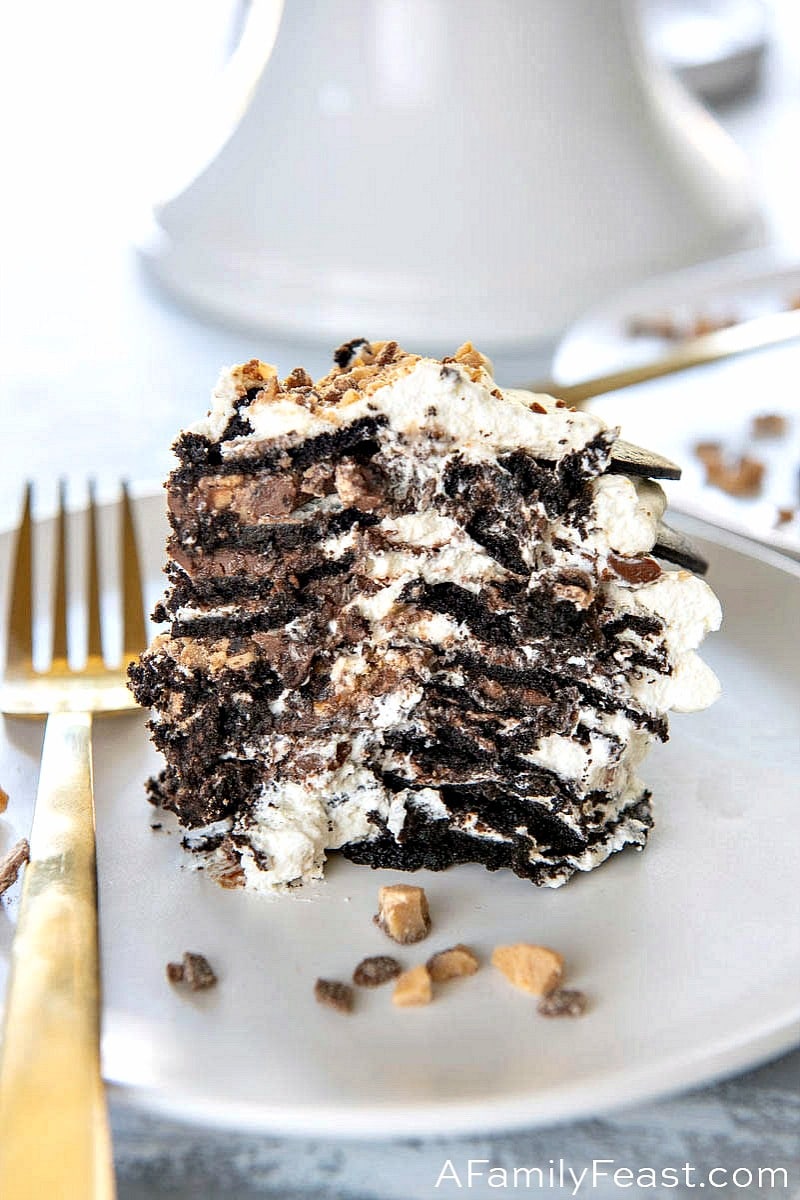 The original icebox cake recipe from the 1930’s was a simple and delicious version that consisted of stacking the chocolate wafer cookies in between layers of slightly sweetened whipped cream, then turned on its side to form a log that was covered with more whipped cream before refrigerating.

Then, the folks from The Magnolia Bakery in New York City featured their version of the icebox cake recipe in their terrific cookbook

, presenting it as a gorgeous layered cake – an approach that we’ve adapted for our version as well.

If you’ve never had an icebox cake – this Chocolate Nutella Toffee Icebox Cake recipe needs to go on your must-try list!  I promise, you won’t be disappointed! 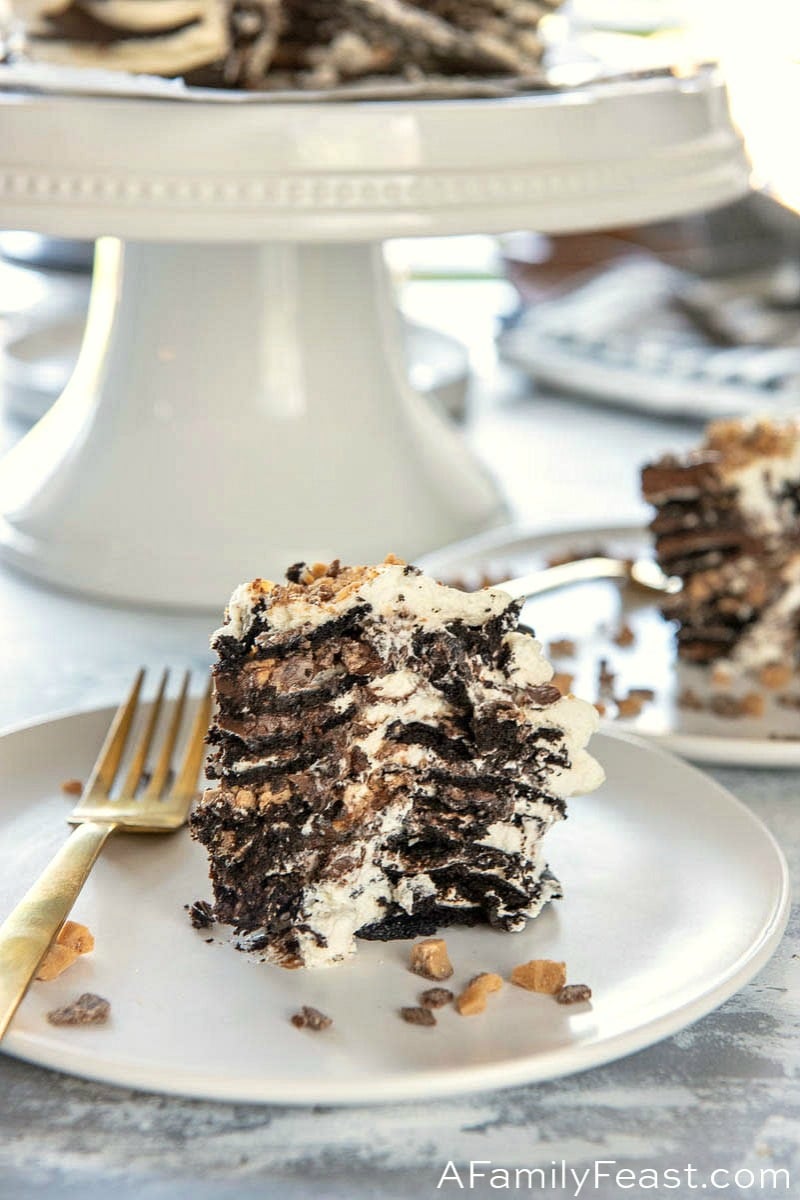 How do you make Chocolate Nutella Toffee Icebox Cake?

With a mixer, whip up some heavy cream and vanilla extract until soft peaks form. Soften some Nutella in the microwave – you’ll want it to be soft and runny enough to drizzle with a spoon.

Chill overnight (or at least five hours if you can’t wait that long) – then slice and serve. Enjoy! 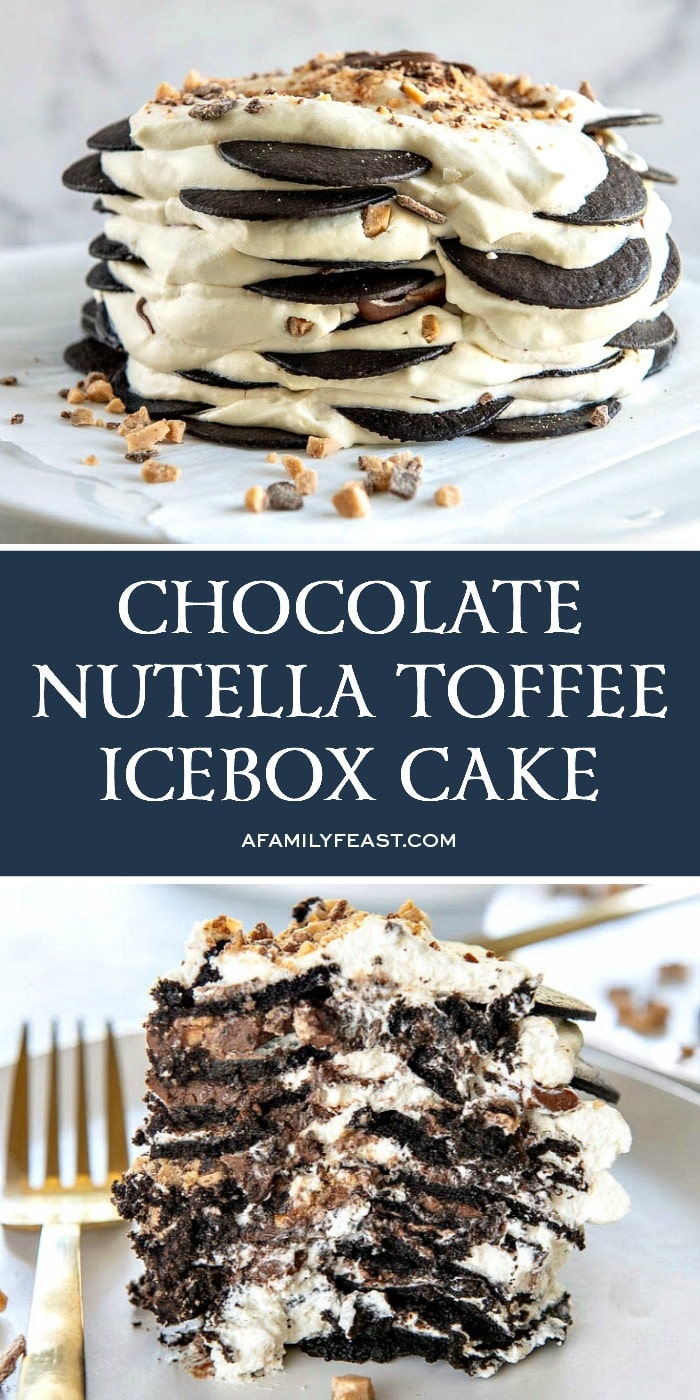 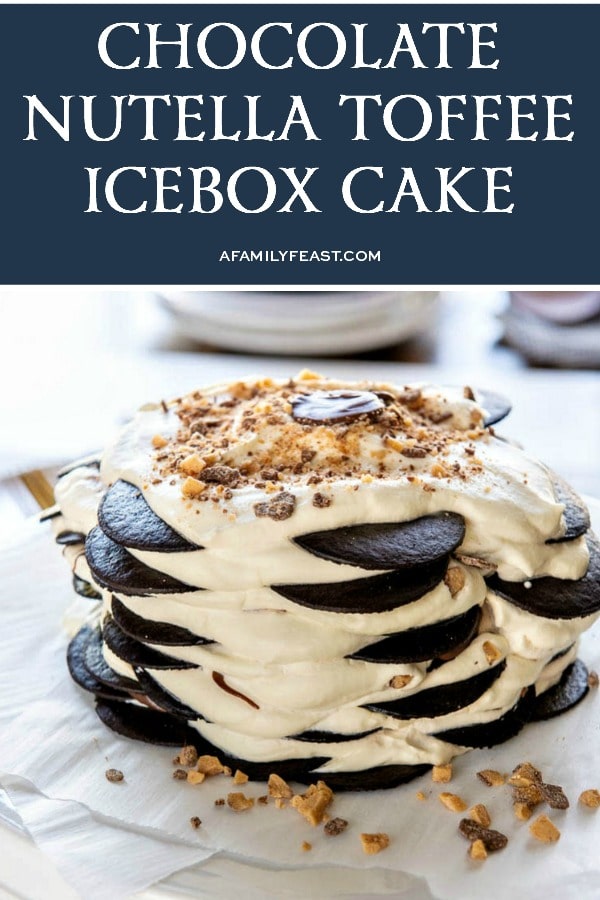 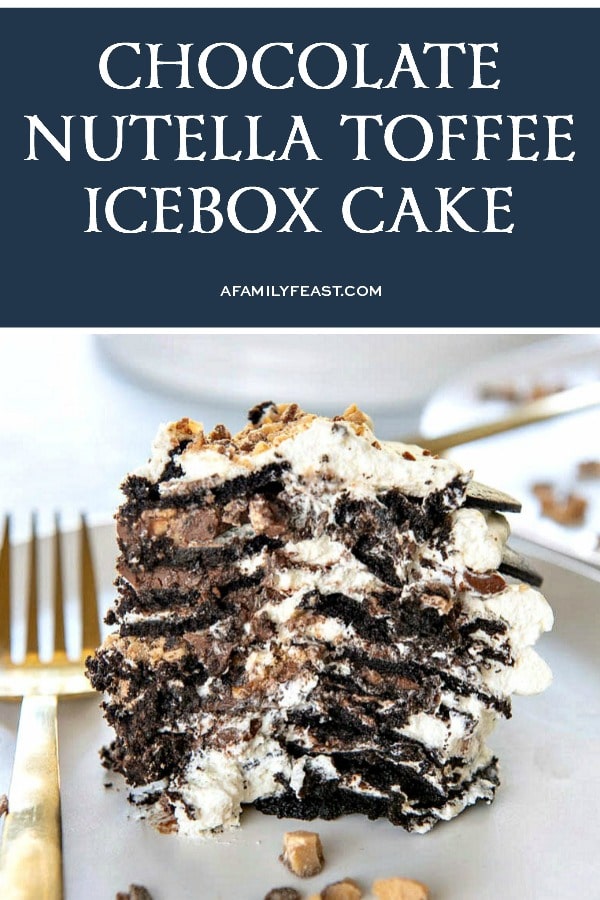 This recipe was originally published on A Family Feast in December 2012. We’ve updated the photos and post. 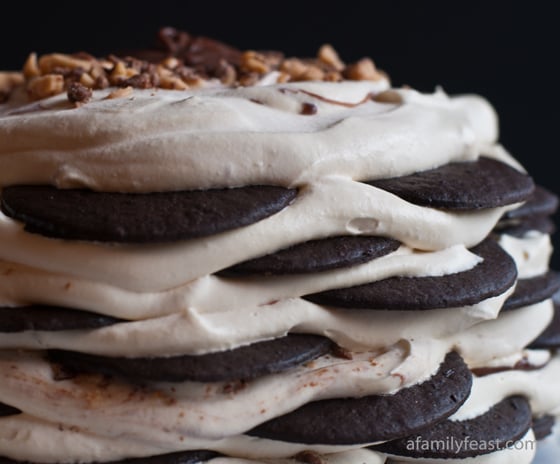