END_OF_DOCUMENT_TOKEN_TO_BE_REPLACED

So good, you’ll be tempted to lick the plate clean!

Scalloped Ham and Potato Casserole has layers of tender, sliced potatoes and ham smothered in a creamy cheese sauce. 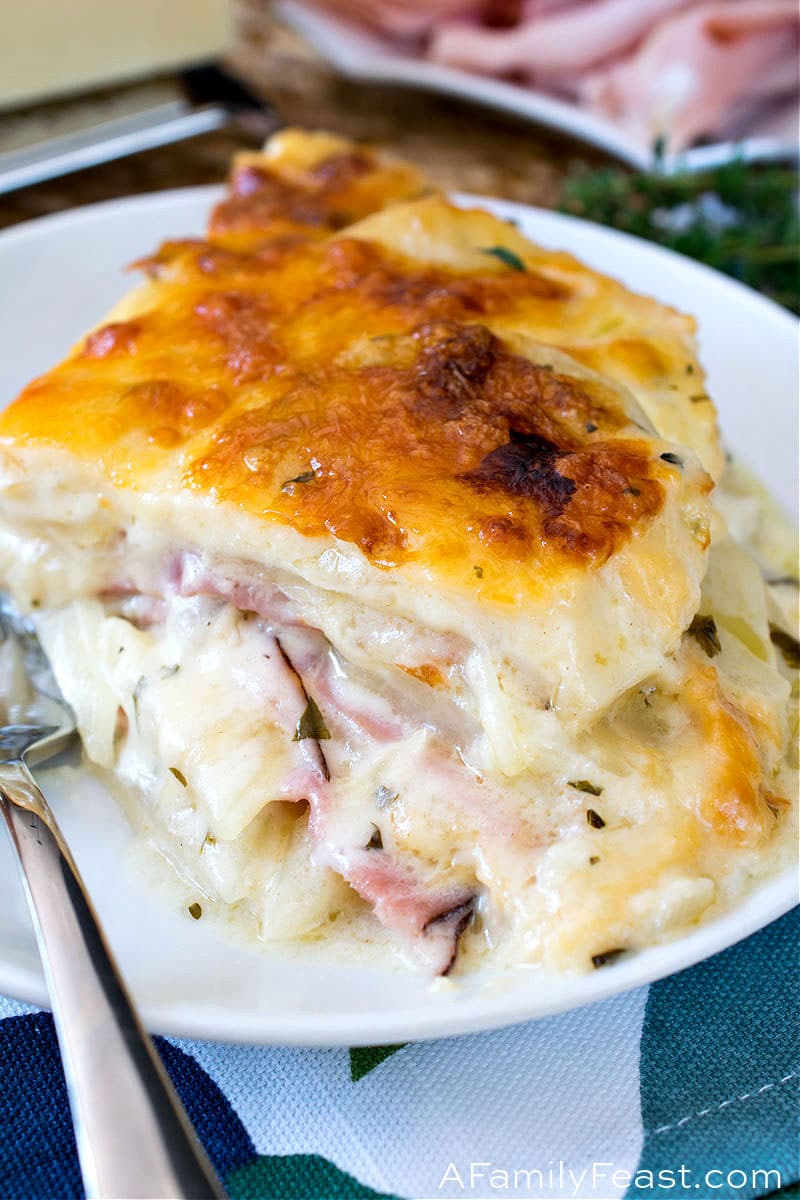 My husband Jack first served a version of this Scalloped Ham and Potato Casserole recipe many years ago at one of the food establishments he managed – and it has been one of his favorite dishes ever since. Over the years, he’s adapted the recipe to the version we’re sharing with you today! 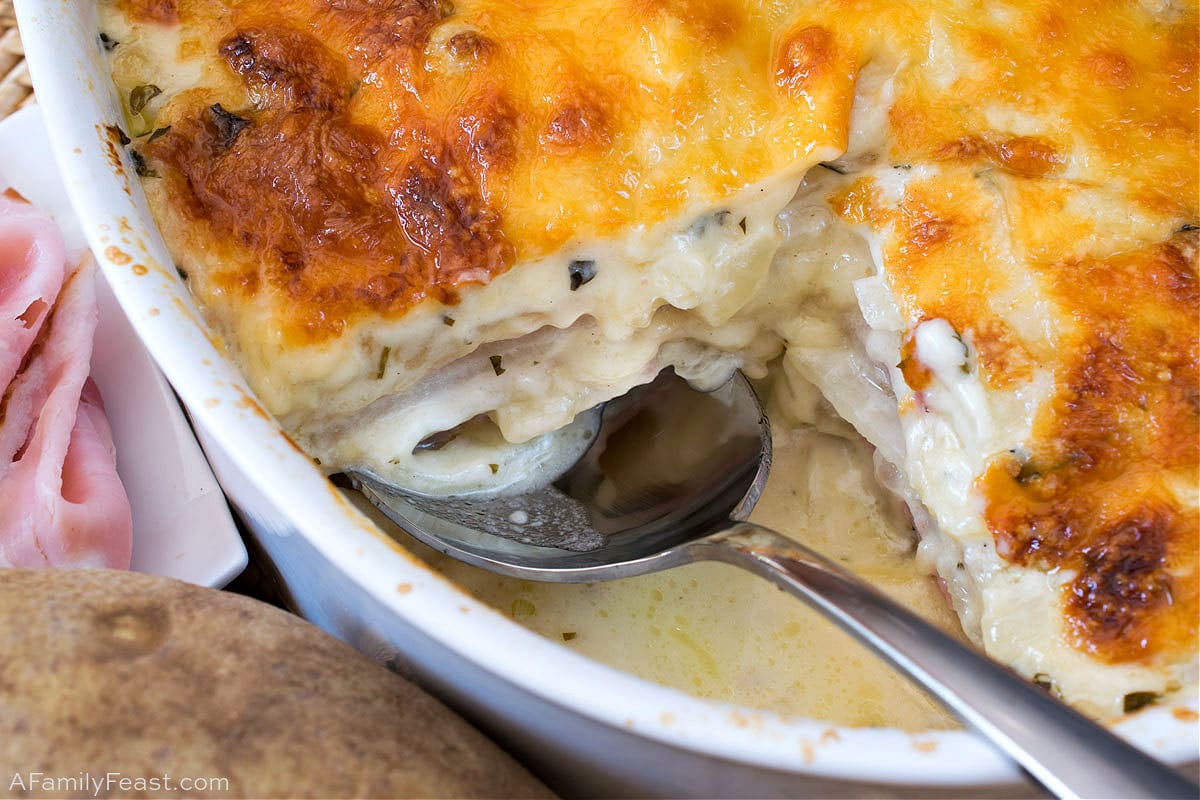 What’s the difference between scalloped potatoes and au gratin potatoes? And why are we calling this a casserole?

Originally, this dish was made as a traditional ‘scalloped’ potatoes recipe – with sliced potatoes in just a white Béchamel sauce – with no cheese added. But over the years, Jack tried adding different blends of cheeses and seasonings – and we love the addition of cheddar and mozzarella cheese along with the ham and potatoes! So – some people might call this an ‘au gratin’ because of the added cheese – although technically, in culinary arts, the term au gratin refers to a dish that has a topping of seasoned breadcrumbs and cheese, which is then baked or broiled until golden brown.  (Our recipe doesn’t add breadcrumbs to the top.) Phew! Still with us? (Scalloped = White sauce.  Au Gratin = Cheese and bread crumbs and a golden-brown top. Our Scalloped Ham and Potato Casserole = White sauce with cheese and no bread crumbs.) 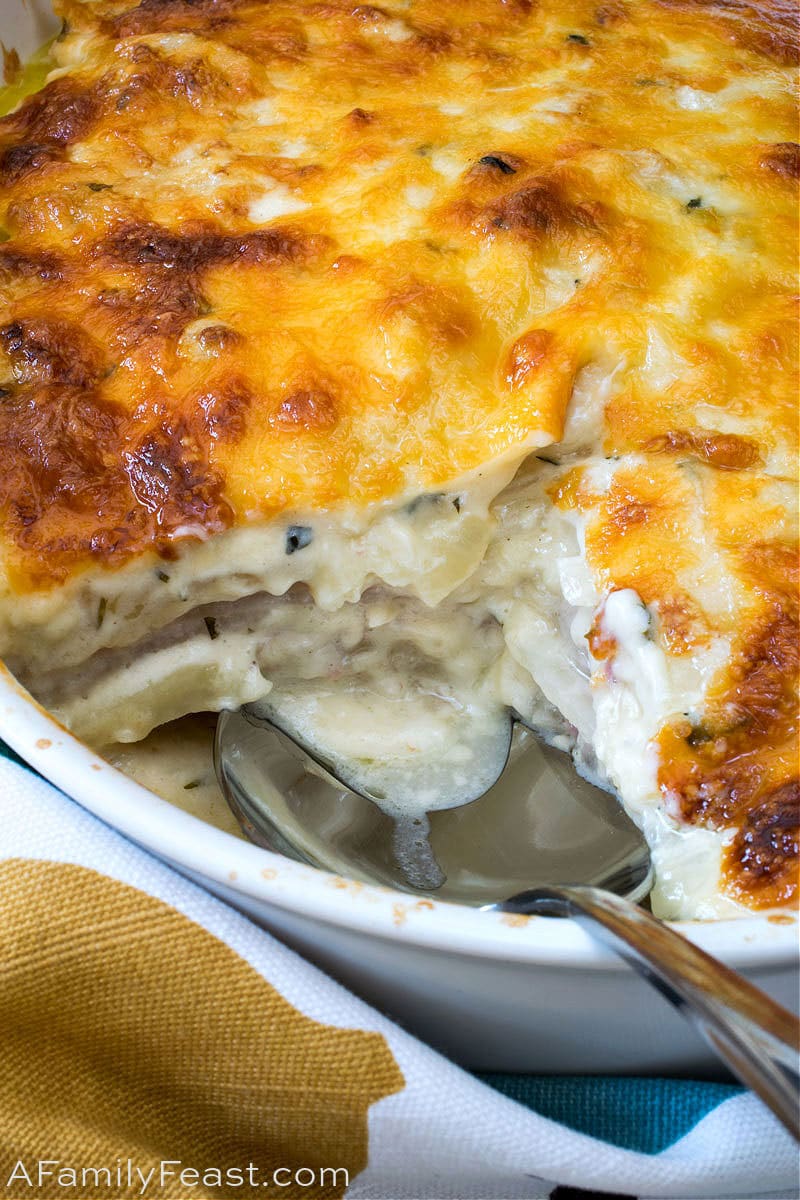 No matter what you call this Scalloped Ham and Potato Casserole, this dish is a wonderful, comforting weeknight family meal!  You can serve it along with a salad or green vegetables (we love it with our Perfect Asparagus recipe!) for a complete meal. Or – it can also be served as a side dish, without the ham, alongside your choice of roasted meat. We made our casserole with thinly sliced Black Forest ham from our local deli. But you could adapt this recipe and use leftover ham from the holidays instead. 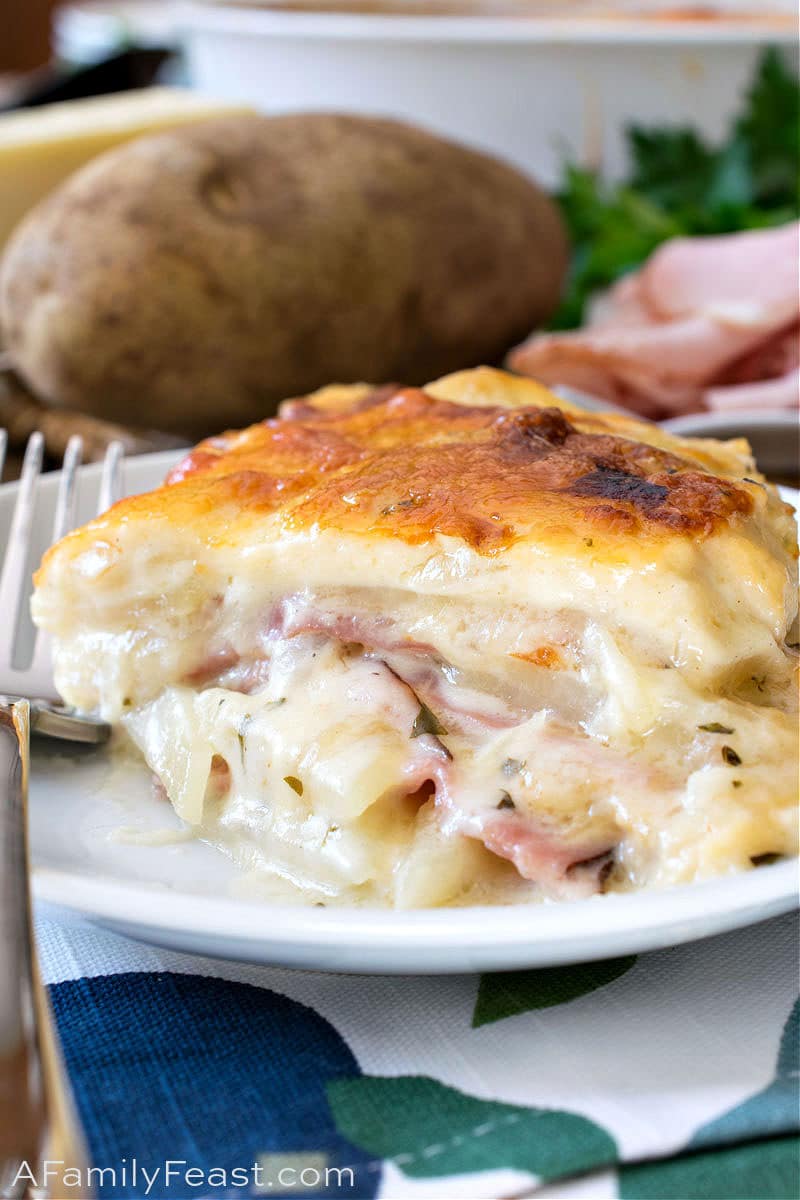 Can I make this Scalloped Ham and Potato Casserole ahead of time?

Yes you can! You’ll want to fully-bake the casserole, then allow it to completely cool to room temperature. Wrap it tightly with foil, then refrigerate it until ready to reheat. On the day you plan to serve your Scalloped Ham and Potato Casserole, preheat the oven to 350 degrees F, then place the casserole dish (still covered in foil) to heat through – approximately 30 minutes or so. 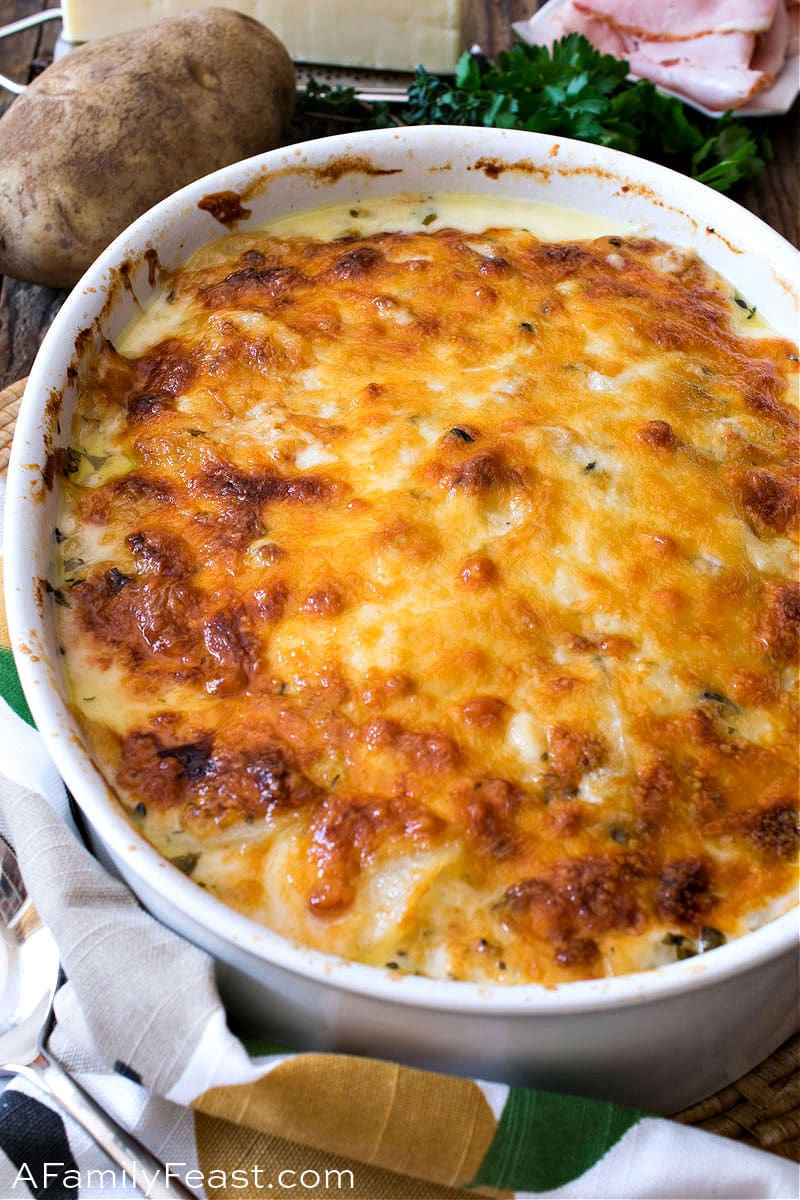 We hope you love this Scalloped Ham and Potato Casserole as much as we do! This recipe was originally shared here on A Family Feast in November 2013. We updated the photos and made some minor edits to the recipe – just to clarify the steps. You may enjoy these other potato recipes:

Few drops hot sauce such as Tabasco, Cholula or Sriracha

*Russet are low moisture, high starch potatoes and should not be substituted.

**We found it easier to divide the ingredients into piles before layering so we could get even amounts. For example, we divided the ham into three piles, the potatoes into four and so on.

***There will be some liquid after baking and resting. This gets absorbed into the casserole as it cools so no need to remove. 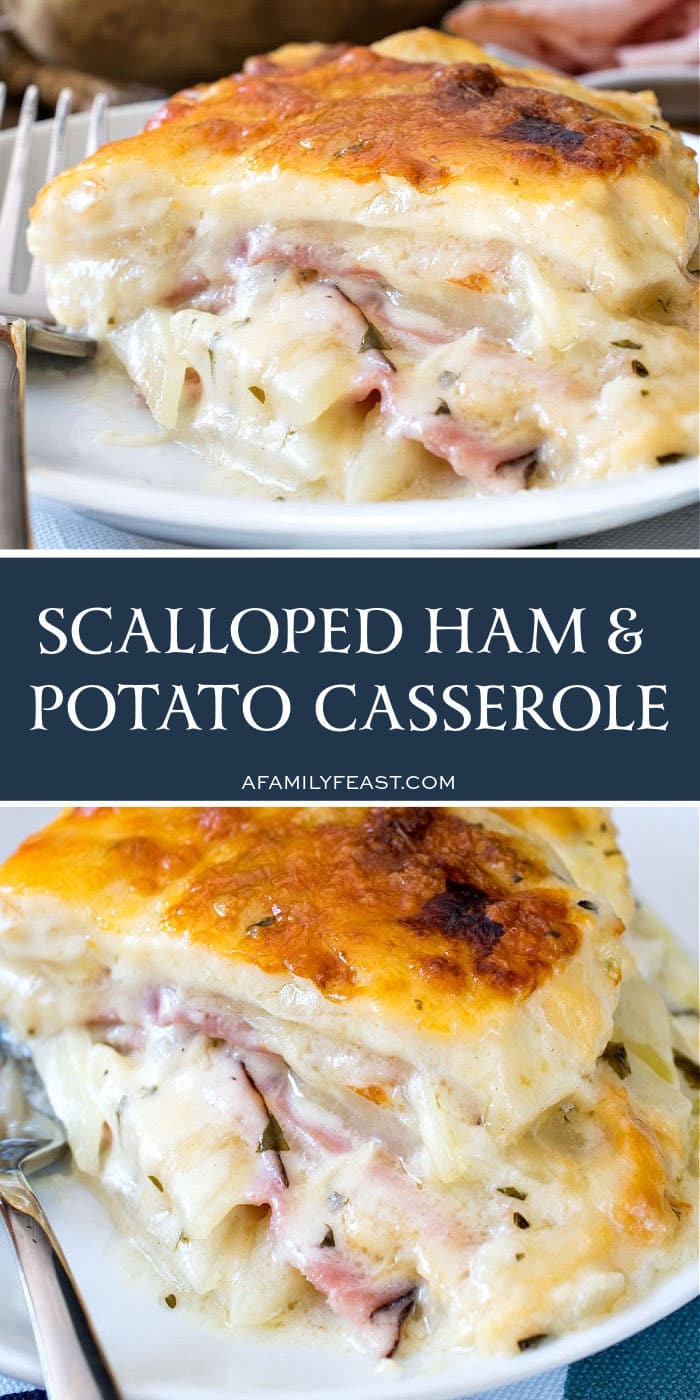 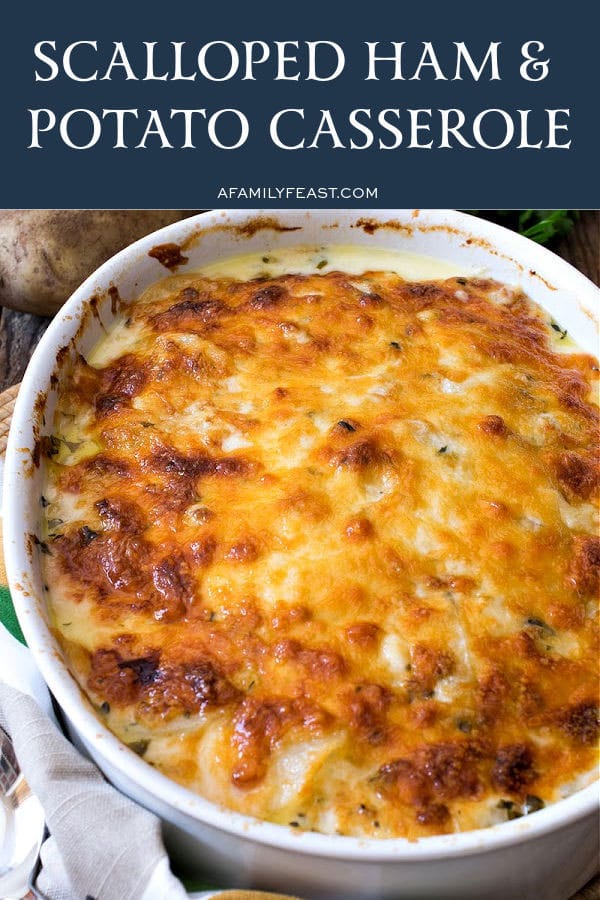 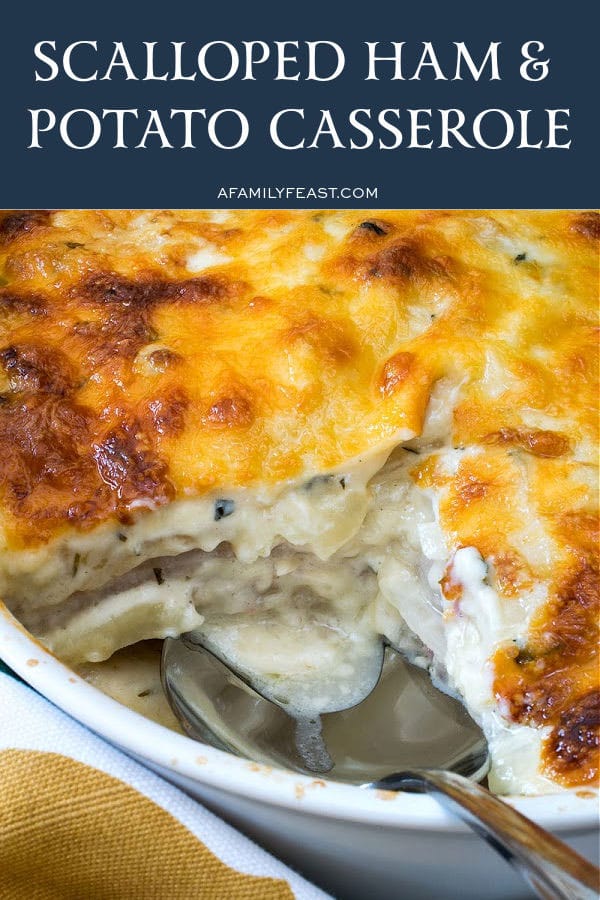 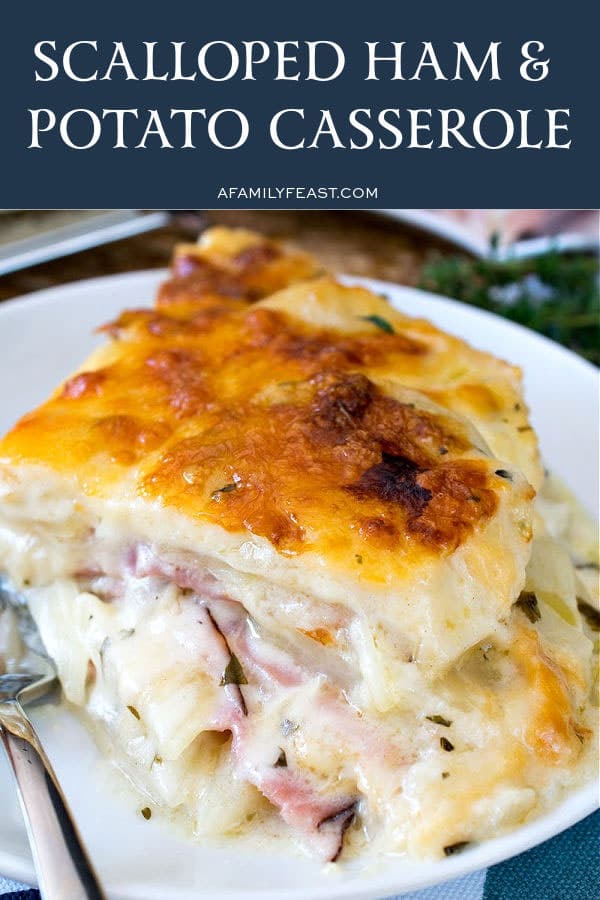 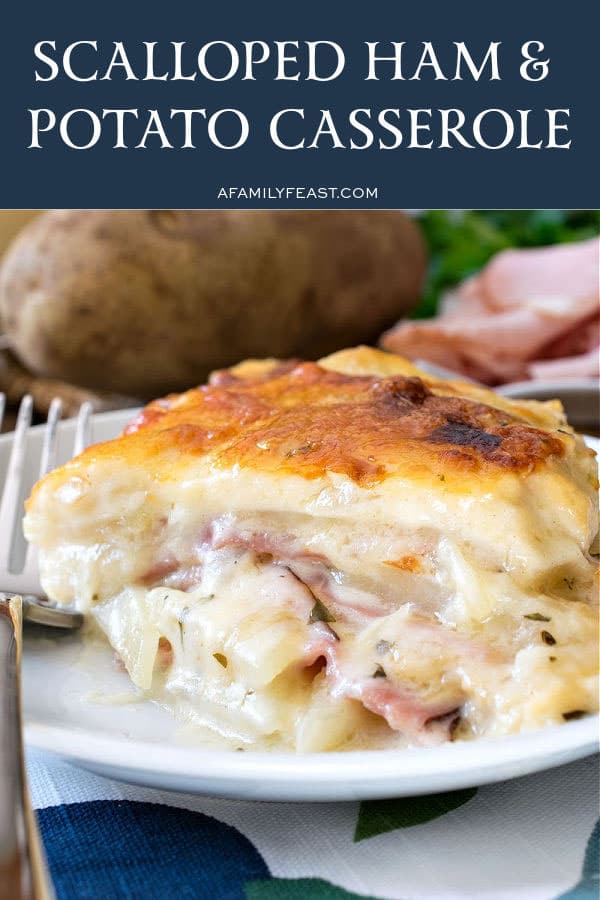 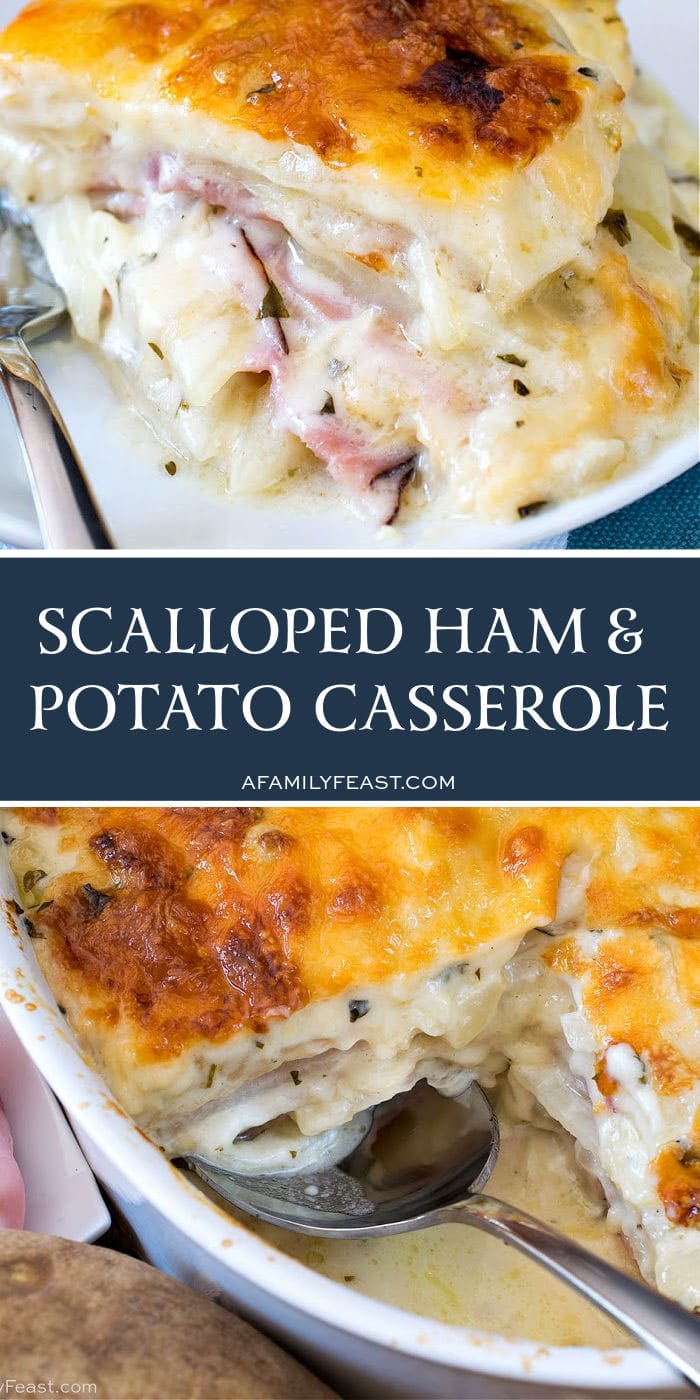