Buy an extra bag of robin egg candies this Easter so you can bake these easy cookie bars. 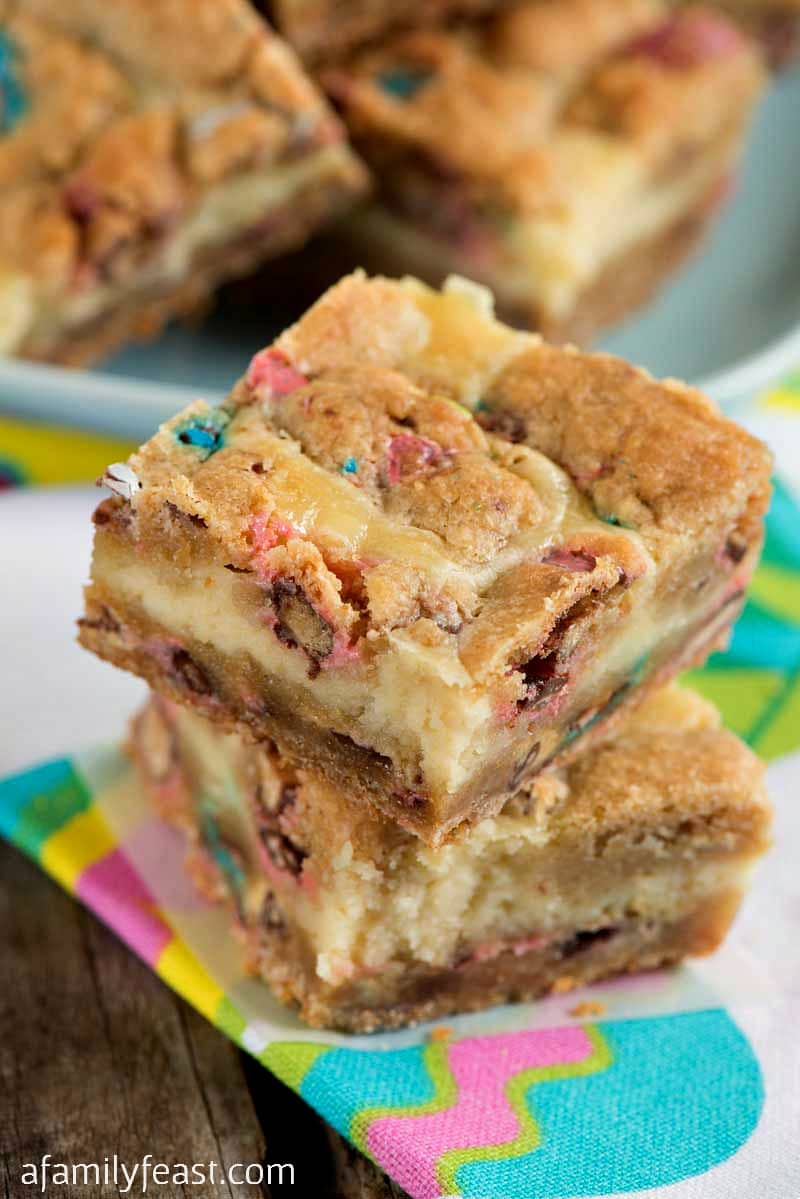 But there is no need to wait until after the Easter Bunny visits your house to make these Robin Egg Cheesecake Cookie Bars…all sorts of malted chocolate Easter candy eggs are available at stores right now! 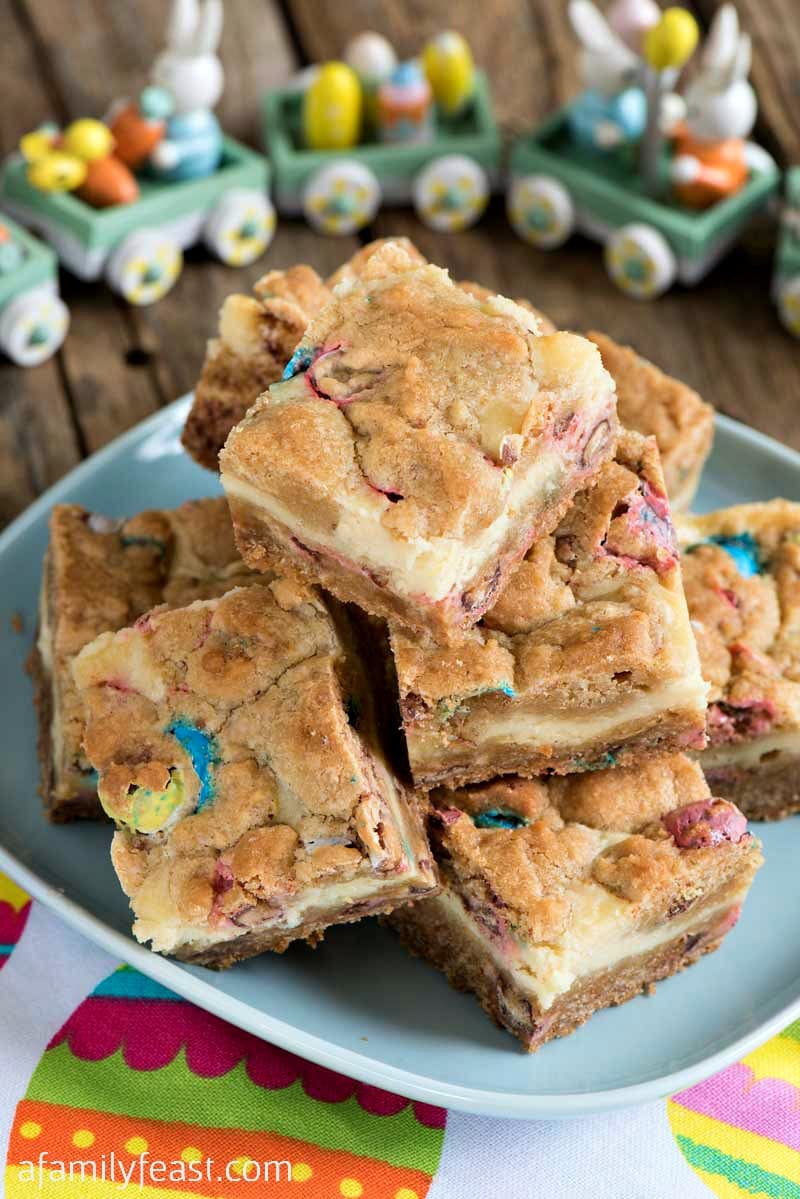 This recipe is adapted from Eating on A Dime’s incredible Chocolate Chip Cookie Cheesecake Bars – where we swapped in chopped robin eggs candies for the chocolate chips in the original recipe.

These Robin Egg Cheesecake Cookie Bars are part soft cookie-part cheesecake, and the crunchy, malted-chocolate candies add a bit of texture and the spots of color from the outer shell are pretty and festive as well. Plus – that distinctive malted milk flavor also goes wonderfully with the cookie dough and cheesecake. 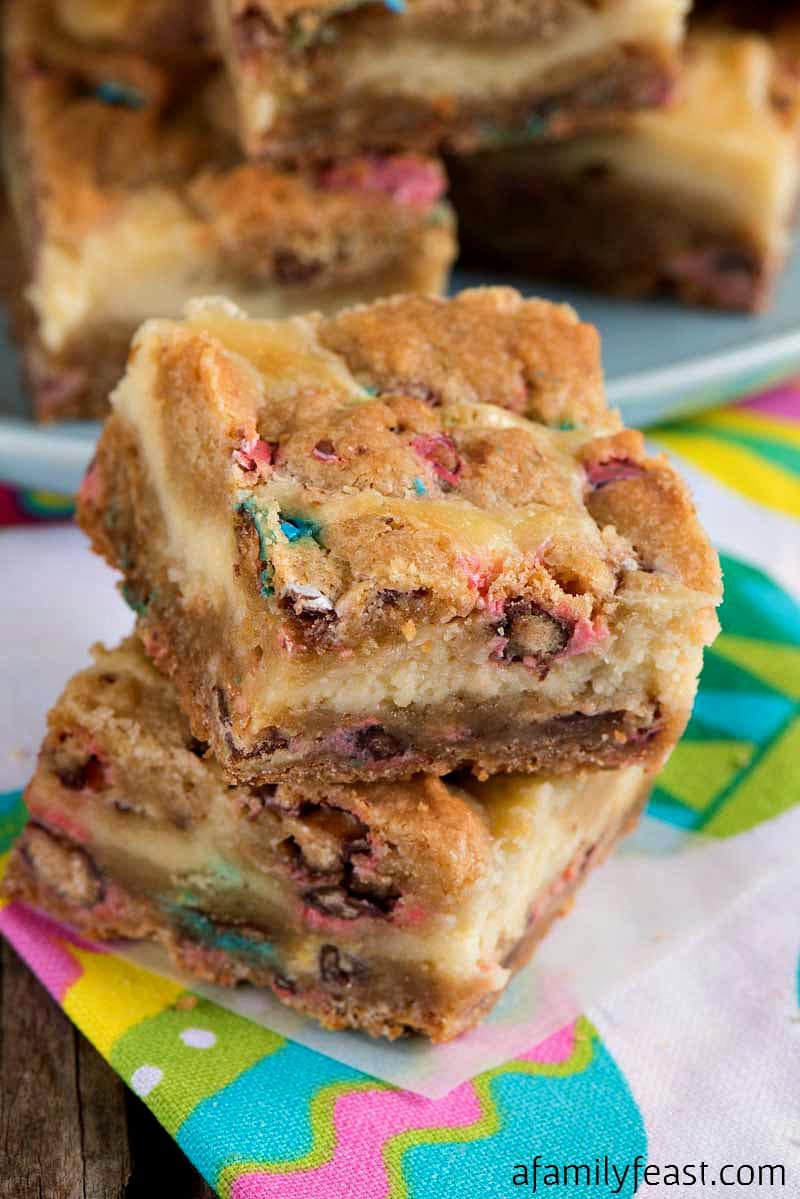 Line a 9×9-inch square baking pan with parchment paper, leaving the sides long enough so that the ends of paper hang outside of the pan. (You will use this to remove the baked cheesecake bars from the pan.) Spray with nonstick cooking spray.

In a small bowl, whisk together flour, baking soda and salt.  Set aside.

In the bowl of a stand mixer, cream together butter and both sugars until light and fluffy.  Add egg and vanilla and beat to combine.

Slowly add flour mixture to the butter mixture, mixing just until combined. Fold in halved robin’s egg candies and mix until evenly dispersed throughout the batter.

Divide the dough into thirds.  Set one third aside. Press the other two thirds into the bottom of the prepared pan, pressing down with your fingers to create an even layer.

In another mixing bowl, mix the filling ingredients together and beat until well combined.

Pour the filling into the pan over the bottom cookie layer.

Take the remaining cookie dough and break it into pieces, spreading the crumble over the top of the filling layer. (It’s fine if some of the filling shows through and no need to flatten the top crumble layer.)

Bake in preheated oven for 40-45, until cheesecake filing is set and the cookie layer is golden brown.

Cool on a wire rack, then refrigerate for several hours until firm.

To serve, use the parchment paper handles to remove the baked cookie cheesecake from the pan. Set on a cutting board.  Cut into 16 squares. 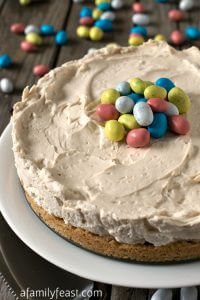 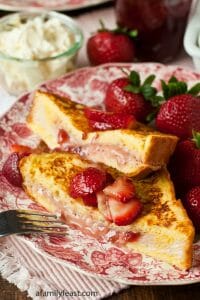