END_OF_DOCUMENT_TOKEN_TO_BE_REPLACED

Potato and Kale Chowder is delicious wintertime comfort food. This big pot of chowder is loaded with two kinds of potatoes, cauliflower, carrots and Tuscan kale in a creamy, flavorful broth. 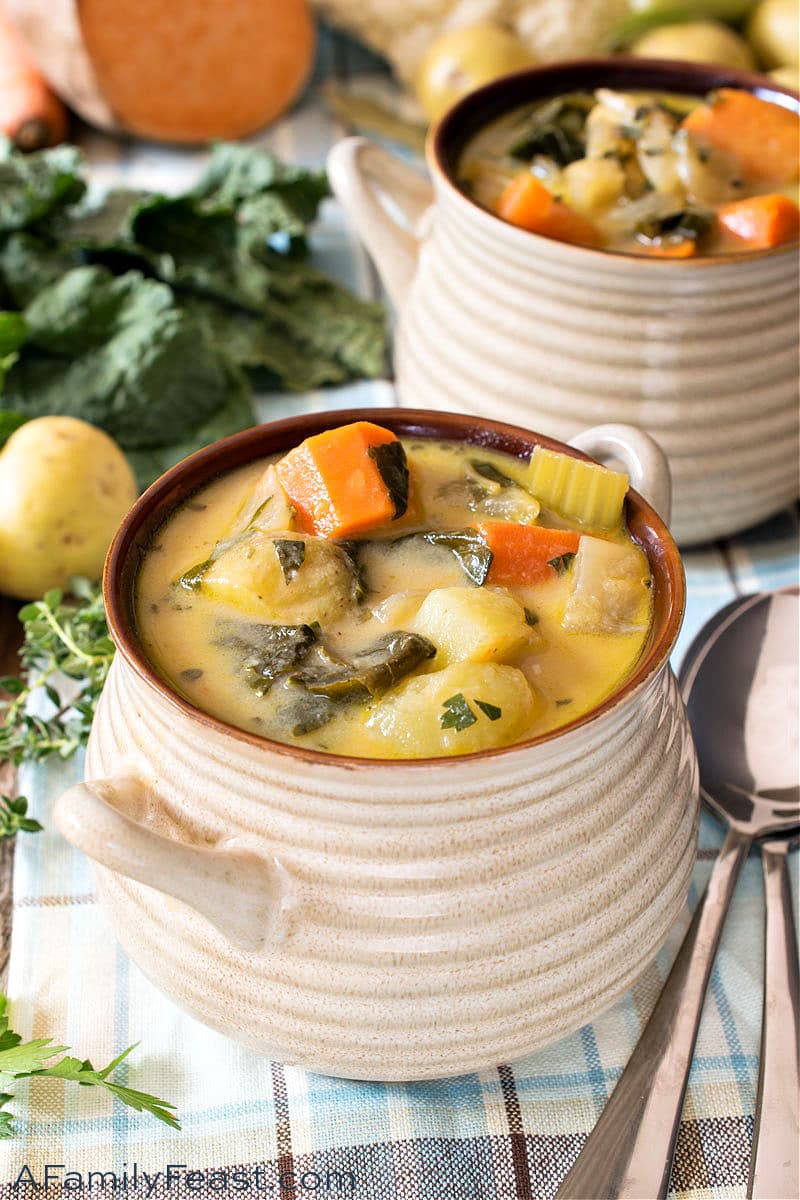 Baby – it’s COLD outside! We’re in the midst of a winter cold snap – but our tummies are nice and warm thanks to this delicious Potato and Kale Chowder.

With just one bowl of this thick and creamy chowder, you’ll warm right up! 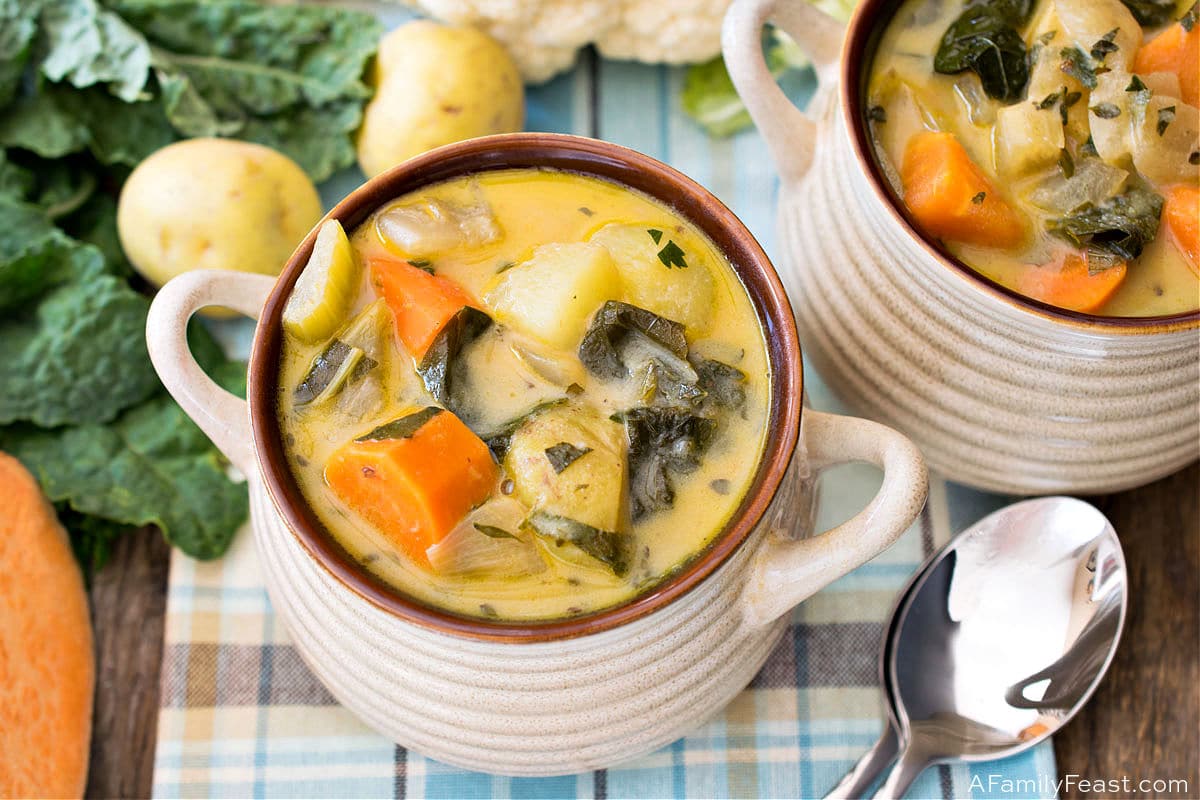 How do you make it?

You’ll start by cooking up about half of a head of cauliflower – simmering it in some vegetable stock until tender. Set aside – you’ll puree the cauliflower later and use it as a thickener in your Potato and Kale Cauliflower Chowder.

In a large soup pot, add olive oil and pancetta, and cook the pancetta until browned and slightly crisp. Then add onions, carrots, celery, yellow and sweet potatoes – cooking and stirring in the oil for about ten minutes. Add your seasonings next, then deglaze the pan with some white wine.

Next, add the cooking liquid from the cauliflower – saving the cooked cauliflower in a saucepan to add later.

Add another quart of vegetable stock to the soup pot, along with some chopped Tuscan kale leaves. (We always prefer Tuscan kale over the curly kale – it is more tender and has better flavor, in our opinion.) Simmer until the kale and other vegetables are tender. 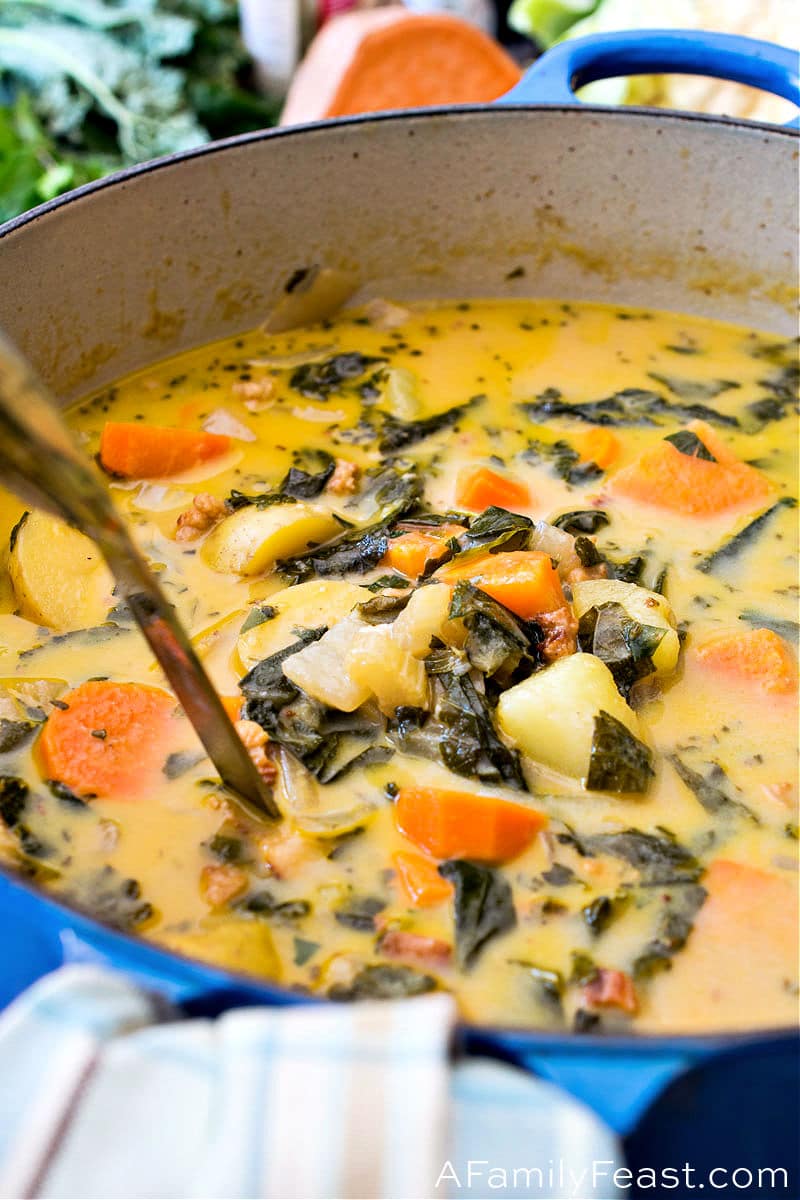 While the vegetables simmer, add milk or half & half to the saucepan with the cooked cauliflower, along with butter and heat until hot and steamy. (Do not simmer or boil.)

Use a blender and puree the cauliflower and milk mixture until smooth and creamy. An immersion blender like this (affiliate link) makes this step very easy.

Once the vegetables are tender, add the cauliflower mixture to the soup pot, along with some fresh, chopped parsley. Serve immediately. 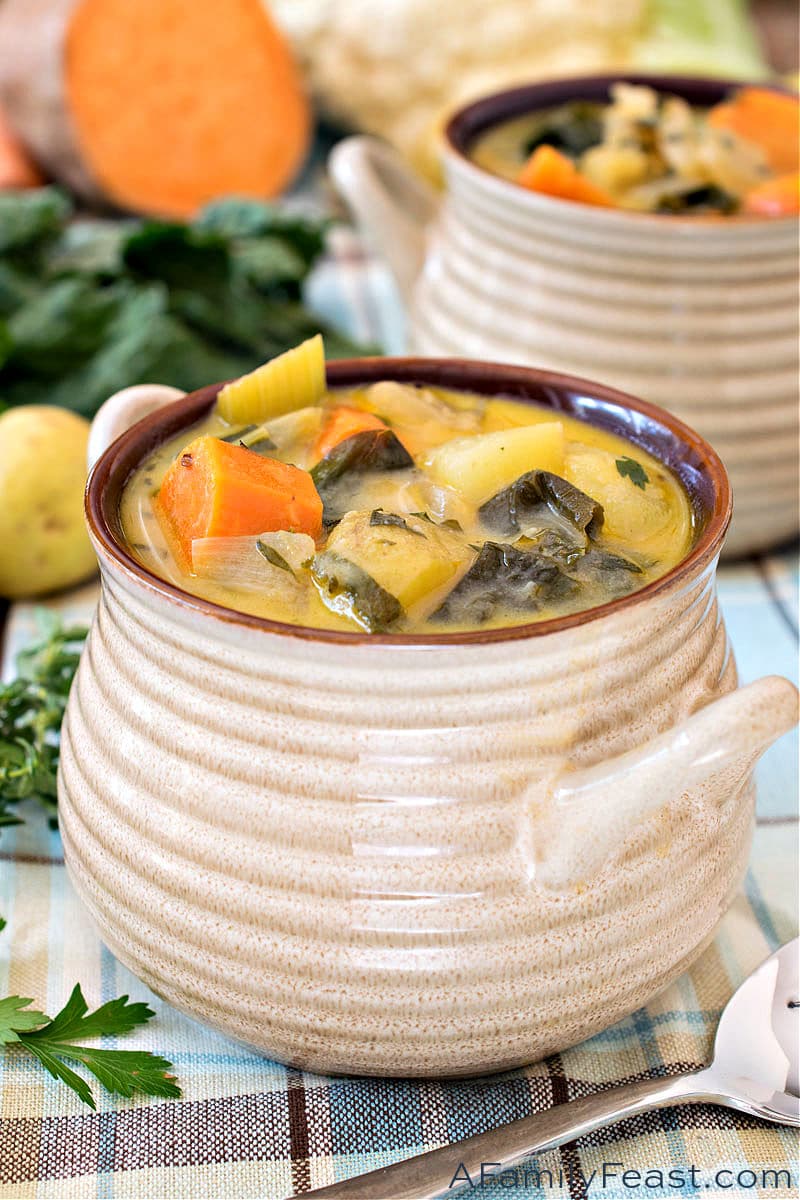 Make this vegetarian if you prefer

As written, this Potato and Kale Chowder recipe is not vegetarian – but it could easily be adapted to make it so. Swap out the pancetta and increase the olive oil by a few tablespoons.

Additionally, you can make this chowder dairy-free and omit the milk or half & half and the butter – then increase the vegetable stock by a cup. Or you could swap in coconut milk instead.

3 cups cauliflower florets (about half a small head)

Place the cauliflower and one quart of the stock in a medium sauce pan and bring to a boil. Lower to a simmer and cook until very tender. Remove from heat and let sit on the back of your stove. You will puree this later to use as a thickener.

In a large soup pot or heavy bottomed Dutch oven over medium heat, add olive oil and pancetta and cook until browned and slightly crisp.

If omitting the pancetta, start here with four tablespoons of olive oil.

Add the white wine and increase heat to high and cook and stir to evaporate the wine.

Add the second quart of stock to the pot along with the kale and bring to a boil, then lower to a simmer and simmer until the vegetables are tender, about 5-10 more minutes.

After the soup is done, remove and discard the bay leaves, then add the puree and the parsley. 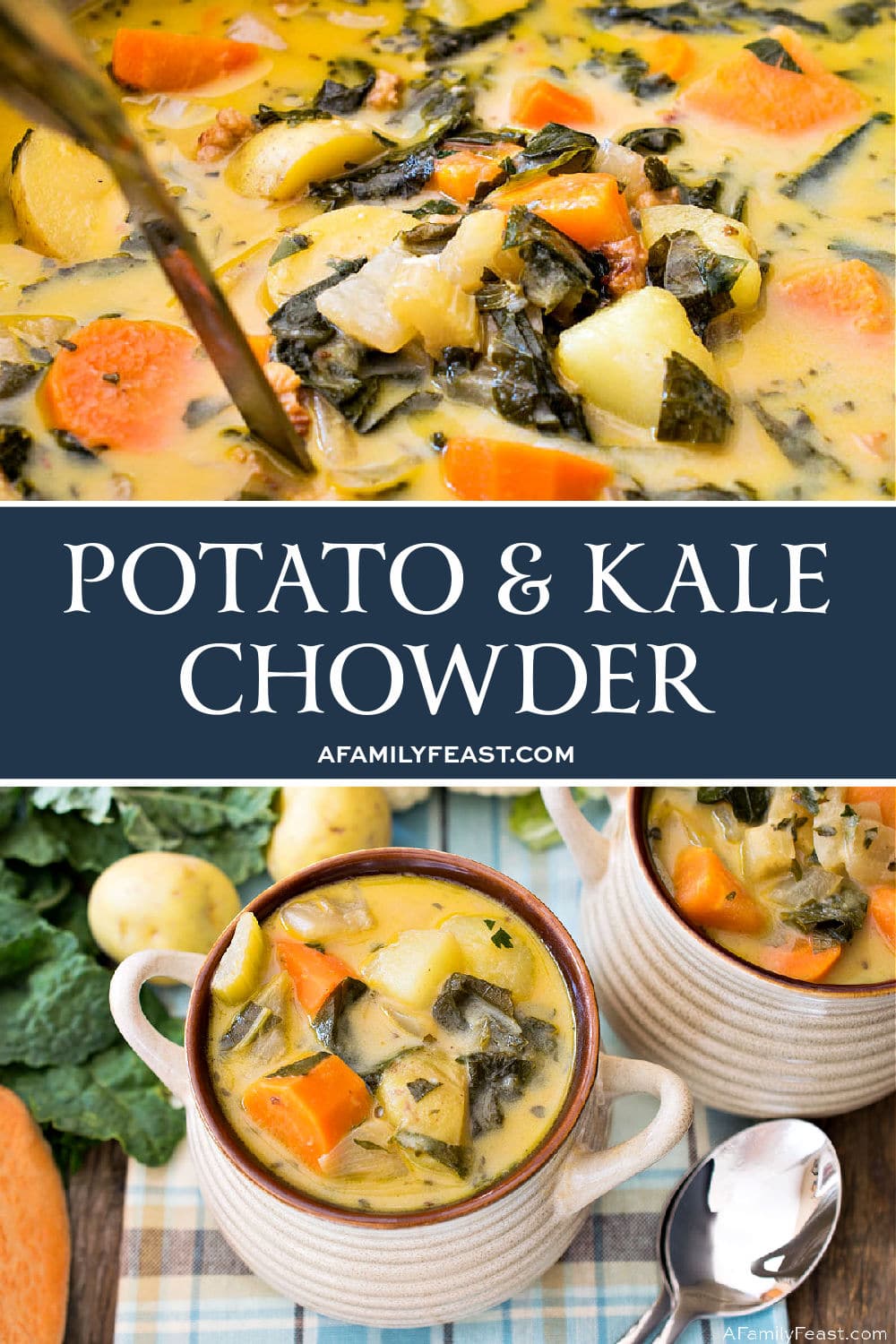 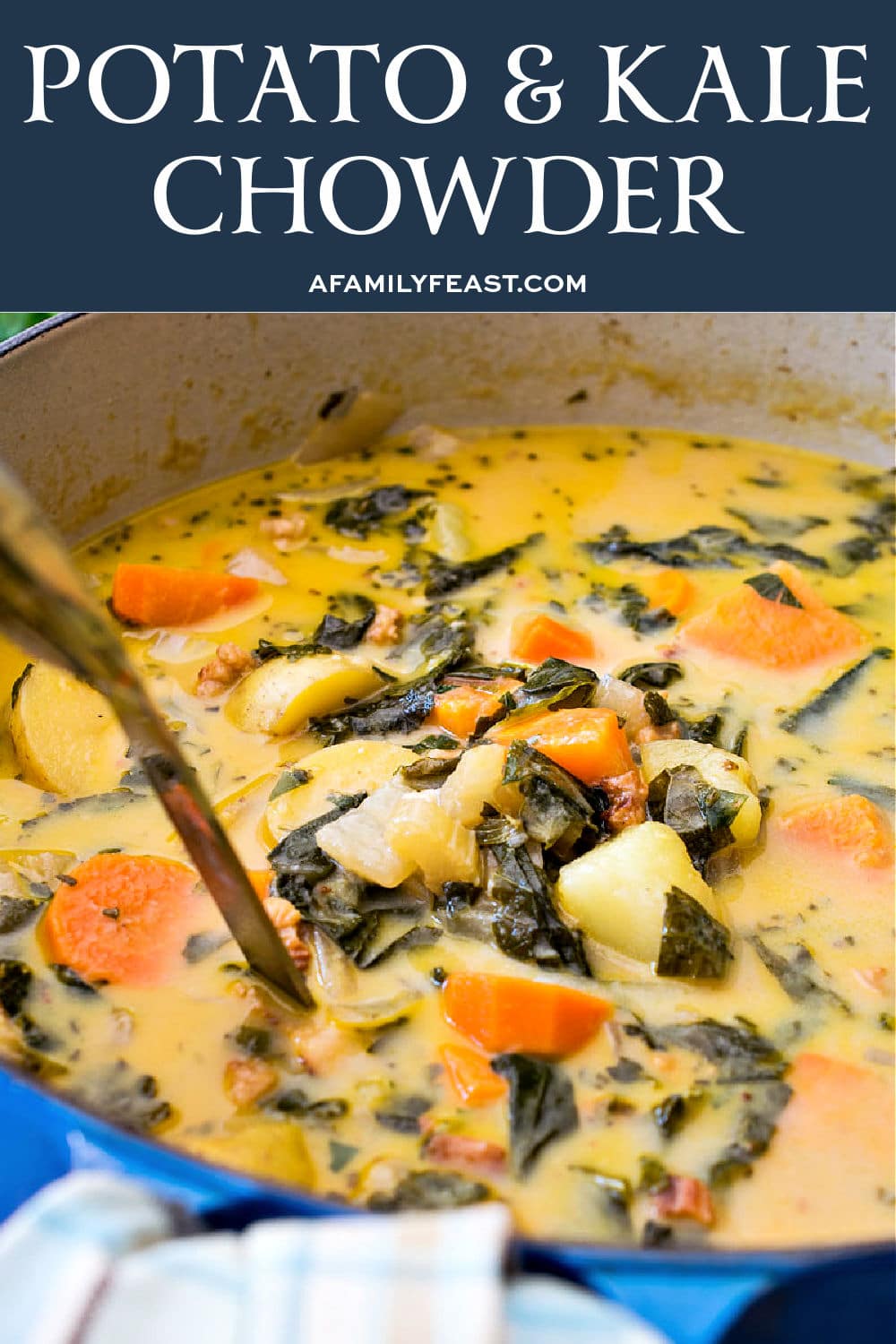 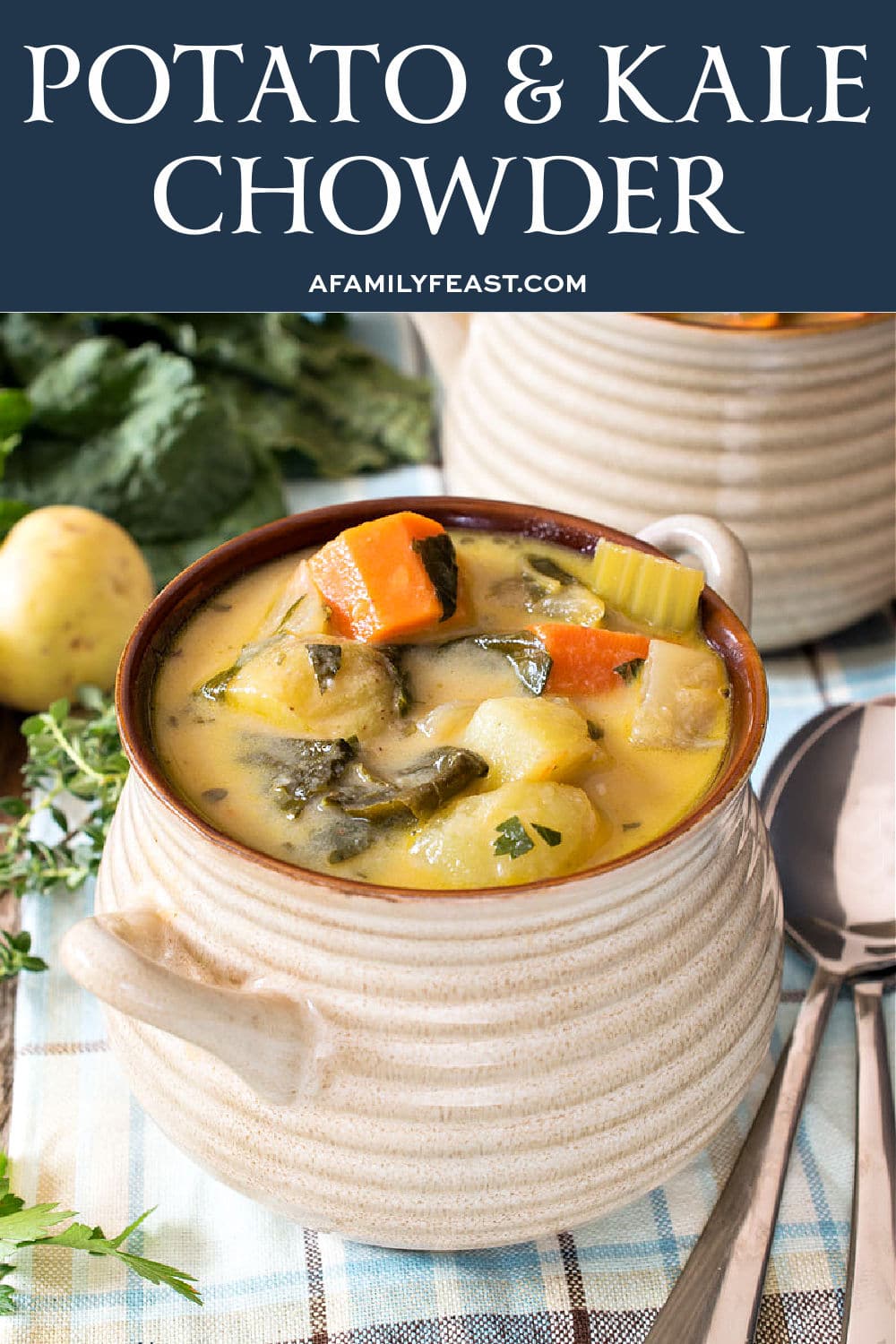 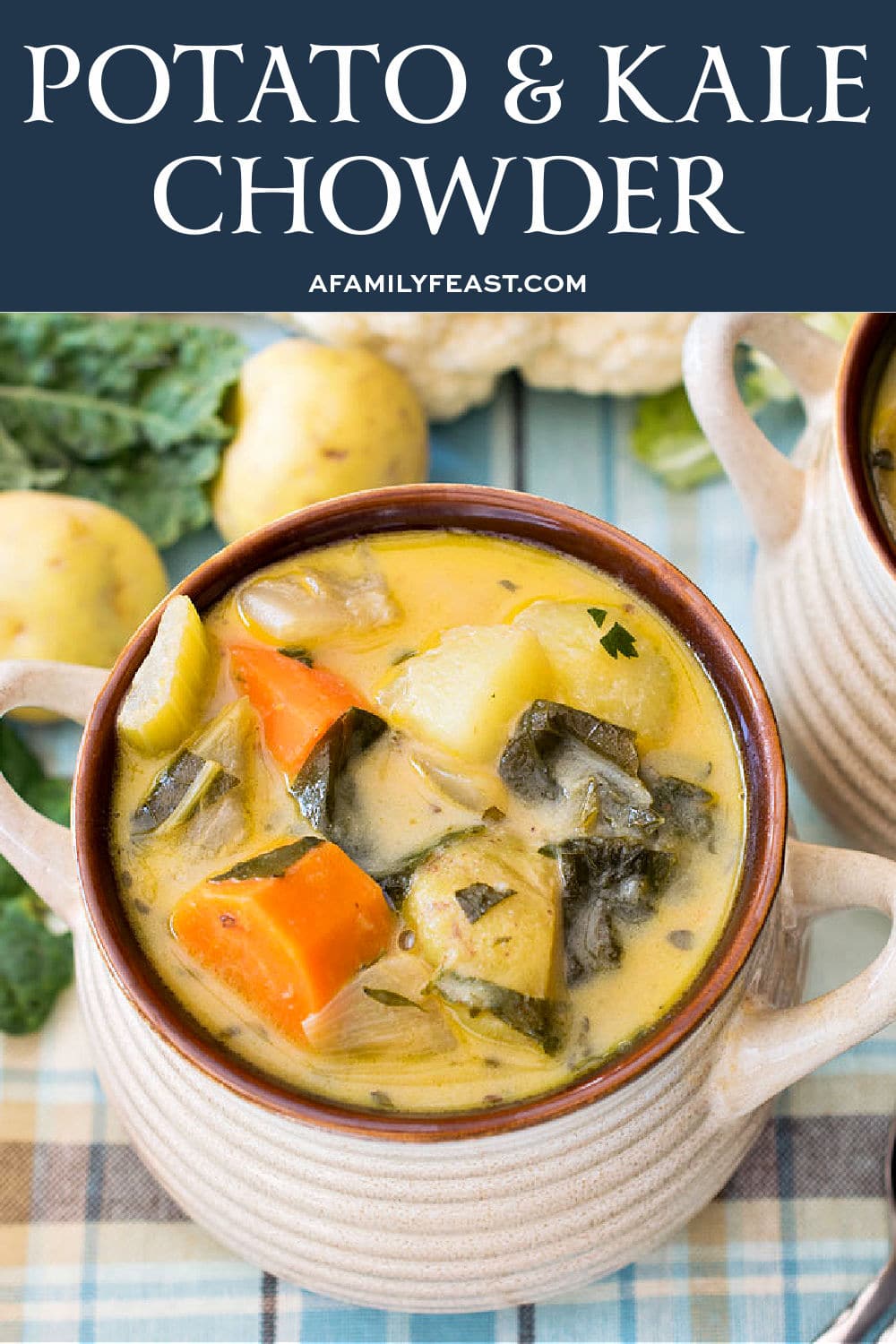