END_OF_DOCUMENT_TOKEN_TO_BE_REPLACED

New England Clam Chowder has tender fresh clams and potatoes in a flavorful cream broth. Enjoy an authentic taste of summer in New England – anytime of the year! 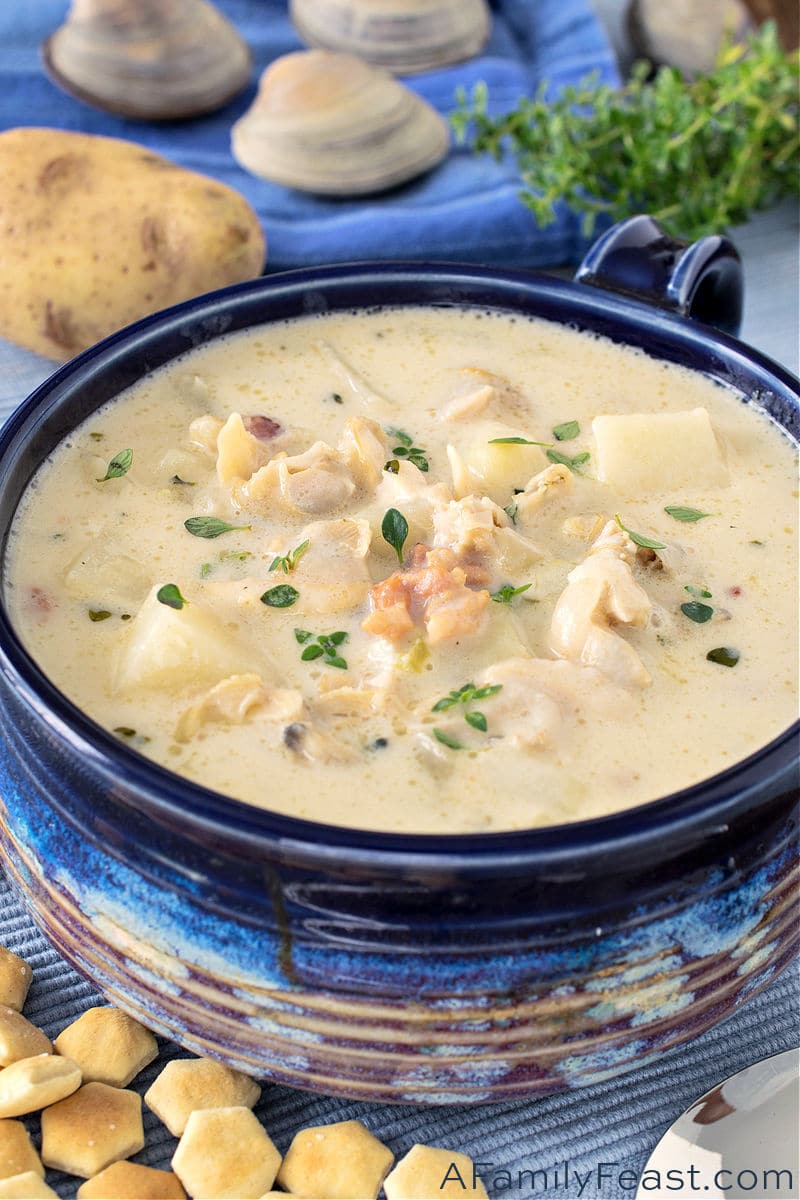 Living in coastal New England (as we do), a recipe for New England Clam Chowder in your go-to recipe collection is an absolute must.  And – if your recipe is an award-winning recipe like this one – even better! Years ago, my husband Jack was part of a team that took first place at the Newport Chowder Festival, which is held every summer at the Newport Yachting Center Marina in Rhode Island.  For that cook-off, the team made 90 gallons of chowder and every last drop was eaten – it’s that good! We’re sharing a family-sized version of that recipe with you today. This New England Clam Chowder is absolutely delicious.  Tender clams and potatoes are combined in a creamy broth flavored with clam juice and cream, and a little bit of salt pork and bacon give this chowder a subtle, smoky taste that perfectly complements the flavors of the clams. Jack has very strong opinions about what makes a good New England clam chowder.  Fresh clams and simple flavors are a must, and the consistency of a good New England clam chowder is not too thick and not too watery – somewhere in between is perfect. 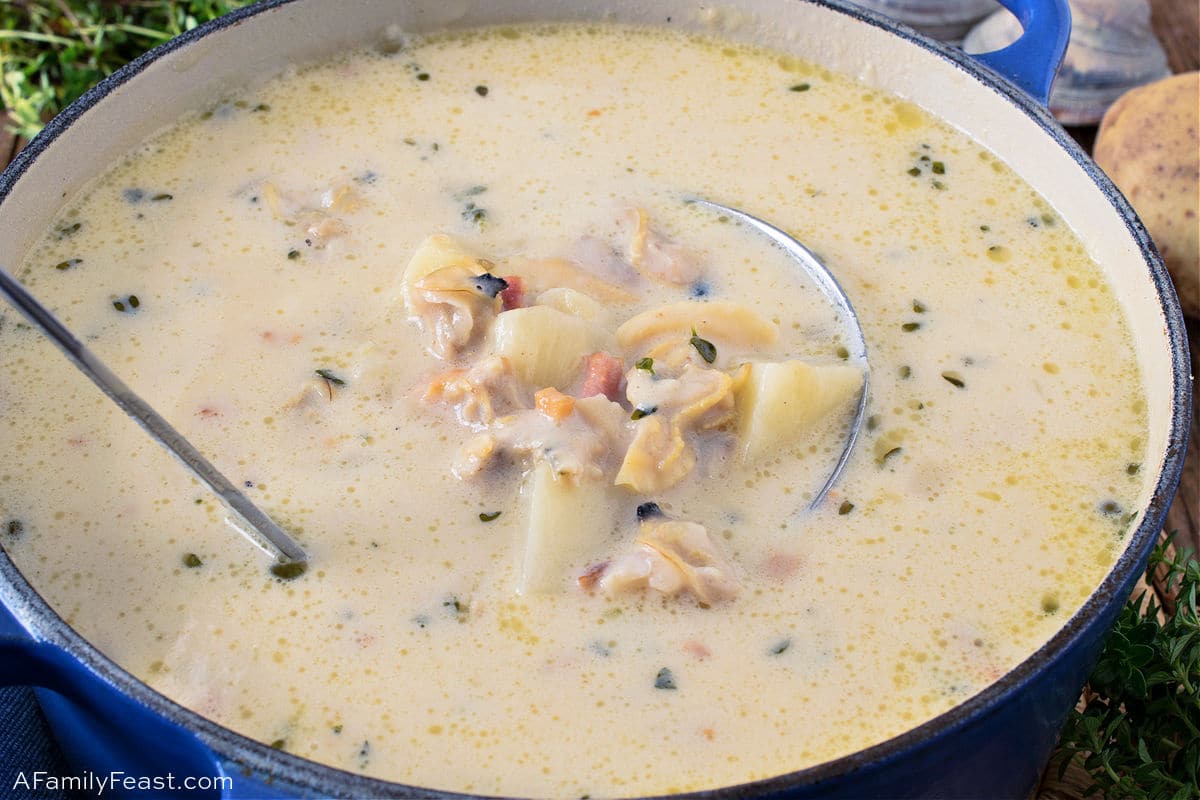 Chef’s Tip If you prefer a thicker consistency for your chowder, you can increase the amount of flour in the recipe by a tablespoon or two. 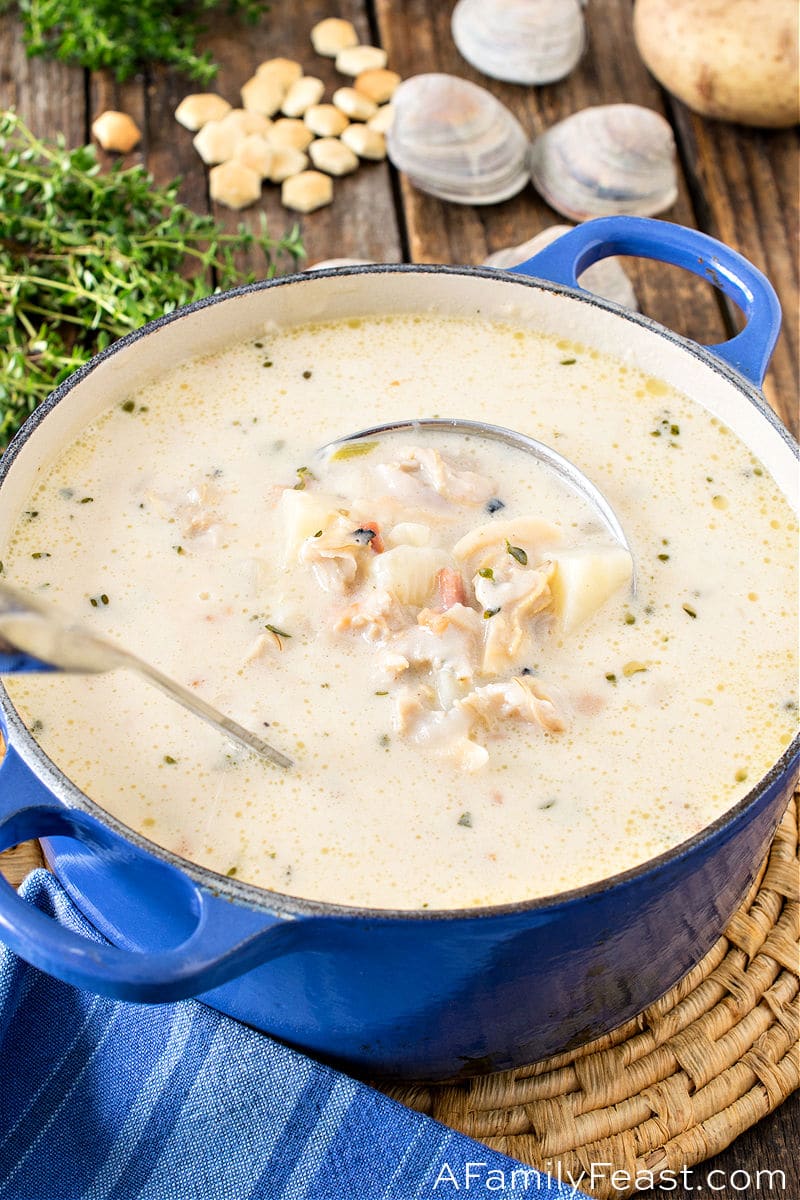 How do I make New England Clam Chowder? 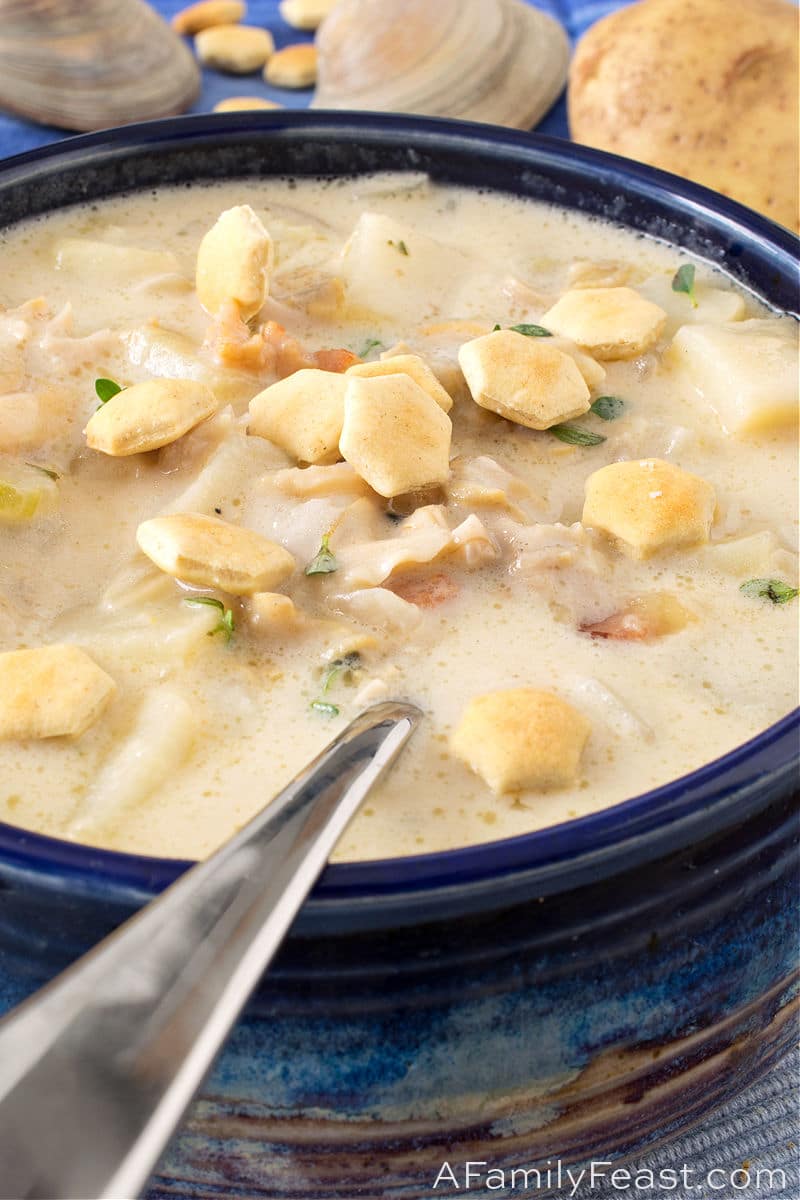 What do I serve with New England Clam Chowder? In New England, clam chowder is most often served with oyster crackers or common crackers. Can I make New England Clam Chowder ahead of time? Yes. Make it up to a day ahead of serving but don’t add the cream until you are ready to serve. How do I reheat clam chowder? Reheat in a pot on the stove over low heat, stirring frequently to avoid scorching on the bottom of your pot. Heat only until warmed through and avoid simmering or boiling as the cream will start to separate. Can I freeze Clam Chowder? We don’t recommend it as the cream may separate and the potatoes will get mushy. If you do freeze, freeze before adding the cream. Then thaw, heat and add the cream before serving. Can I make Clam Chowder in a slow cooker? We don’t recommend it because the clams will get overcooked, tough and chewy. Our New England Clam Chowder recipe originally appeared on A Family Feast in April 2013. We’ve updated the post and photos; the delicious recipe remains the same.

You might enjoy these other New England classic recipes: 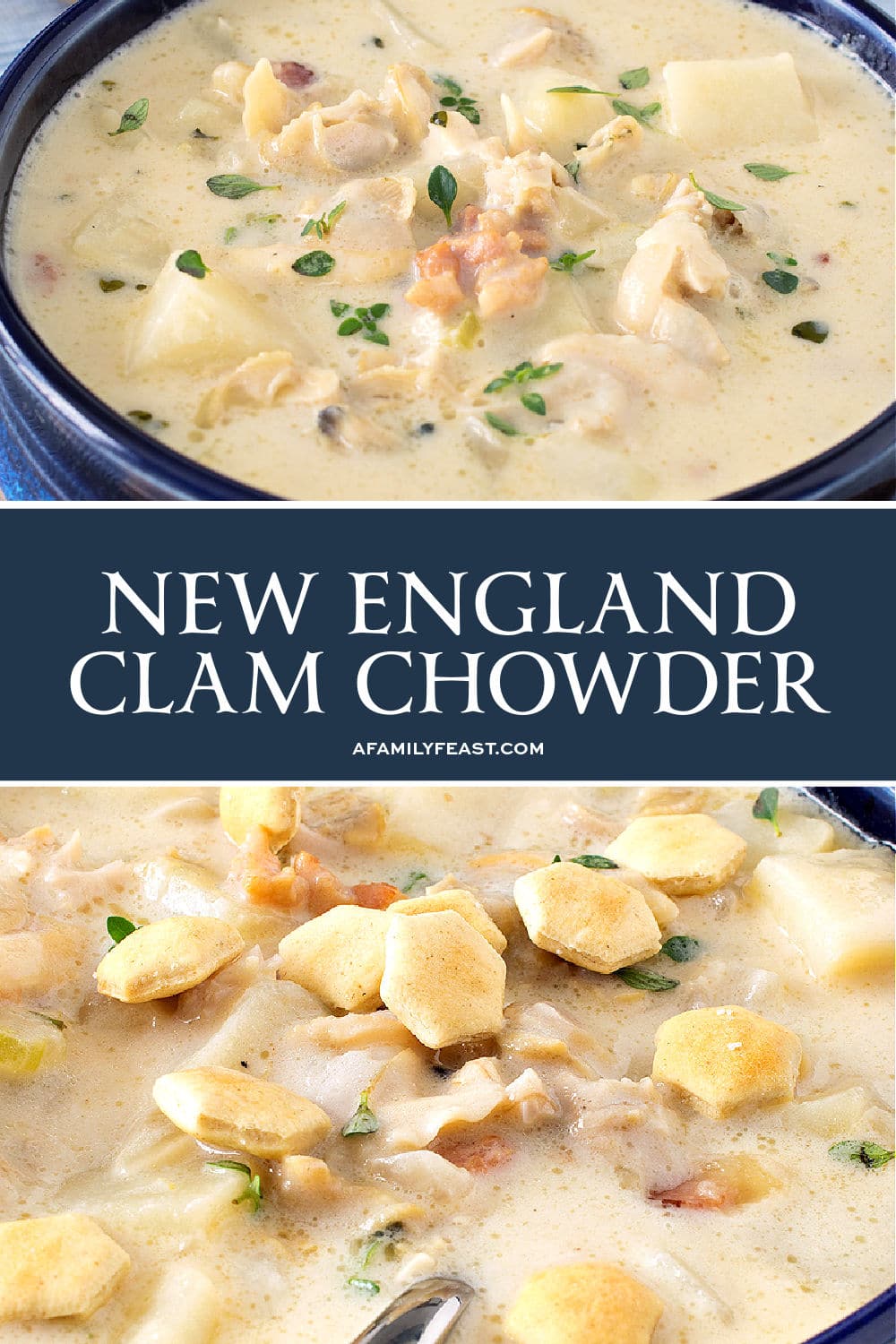 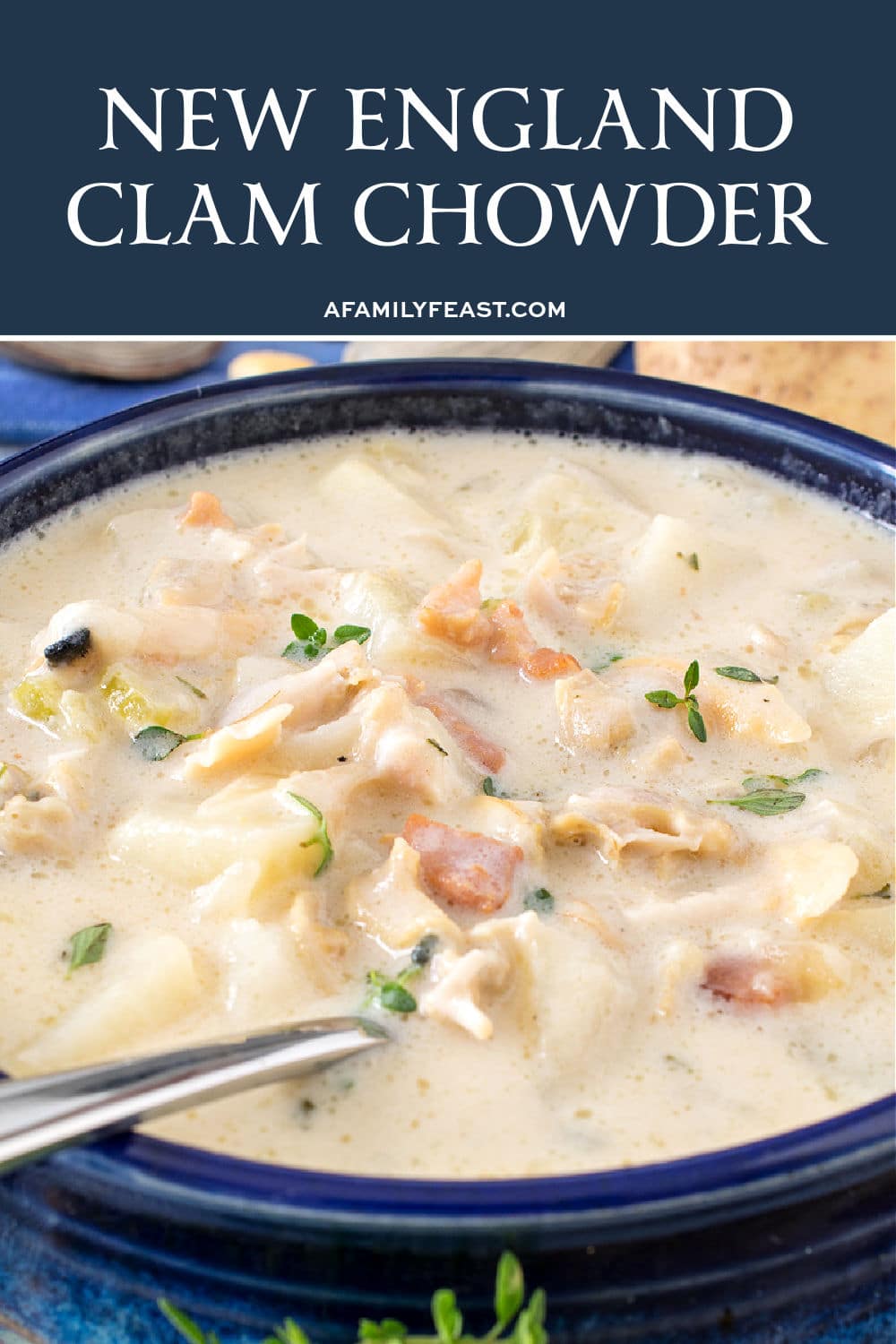 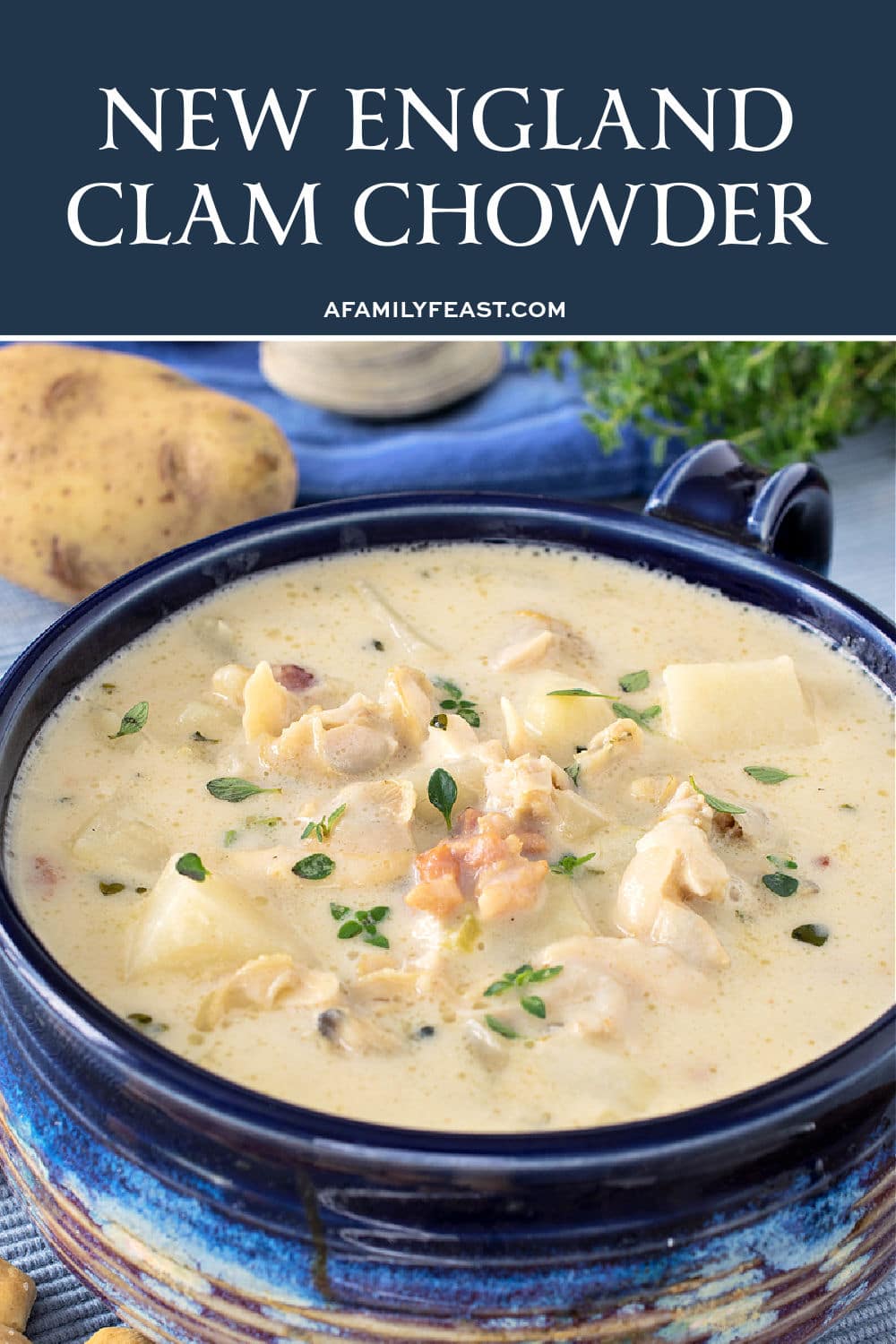