A special meal for a special occasion.

Hi everyone – Jack here. Lobster Newberg is a rich and decadent seafood dish. It’s a wonderful menu option if you are looking to serve a special meal for two for the holidays, a birthday, Valentine’s Day, or an anniversary.

This is actually a fairly simple dish to prepare. But both lobster and cream sauce are what I would call ‘delicate’ ingredients, so it can be easy to overcook Lobster Newberg – resulting in tough and chewy shellfish.

But don’t worry – if you follow the recipe below precisely, the end results will be stunning. The secret to making a perfect Lobster Newberg is to read through the recipe beforehand to familiarize yourself with the process, have all of the ingredients ready to go, and just take your time.

The History of Lobster Newberg

Although there are a couple of restaurants that claim to have created this amazing meal back in the 1800’s, most stories attribute this dish to Delmonico’s Restaurant in New York City. A wealthy sea captain named Ben Wenberg shared his recipe idea with Charles Delmonico, the restaurant manager at the time.

Intrigued by the idea, Charles Delmonico gathered all of the ingredients on the spot so that Wenberg could demonstrate how to prepare the recipe.

With its tender chunks of lobster in an amazing sauce – everyone agreed that the dish was delicious! After a few tweaks by the restaurant chef, Lobster a la Wenberg was added to the menu at Delmonico’s and quickly become a customer favorite.

A few months later, Charles Delmonico and Ben Wenberg had a falling out – and Lobster a la Wenberg was removed from the menu. But customers kept asking to order the dish, so it was renamed Lobster Newberg and added back to the menu to this day.

Lobster Newberg is often listed as Lobster Newburg – but either way you spell it, it’s absolutely delicious!

You may enjoy these other Lobster recipes:

1 cup heavy cream, plus more as needed *See Notes below

Fill large pot with water and bring to a boil. Add two live lobsters, head first into the boiling water.

Once it comes to a boil, time exactly eight minutes. Normally cooking time would be longer but the cooked lobster meat will be cooked further in this dish.

Discard water and plunge the cooked lobsters into an ice bath to cool them down quickly.

Let them sit in the ice bath for ten minutes then remove claw meat, tail meat and knuckle meat. Save shells in the freezer for future lobster stock but discard inner body.

Heat the clarified butter over medium heat and add the cooked lobster meat (if the lobster meat is wet it WILL splatter so make sure you pat the meat dry with a paper towel.)

Saute the meat for about two minutes until a little golden and tender. Do not cook any longer or it will get tough.

With a slotted spoon, remove the lobster meat to a bowl.

Off heat, add the cognac and return the pan to heat and cook for another minute.

Add the heavy cream and reduce the heat to a medium low simmer. (Heavy cream is one of the few dairy products that will not break under heat.) Simmer slowly until the mixture has reduced to about a cup.

Place the beaten egg yolks in a medium bowl and slowly drizzle in the hot cream mixture while you whisk. This tempers the eggs so they thicken the mixture without scrambling.

Add lobster meat back in along with any liquid in the bowl and stir over low heat just to heat the lobster through. Do not let it bubble after the egg yolks are in.

If the mixture is too intense in flavor, add a little more heavy cream to smooth it out.

**Start with just a pinch of nutmeg and cayenne pepper. You can always add more, but you can’t take it back.

*Buy enough heavy cream to smooth out the mixture if the flavor is too intense or if you added too much nutmeg or cayenne. I bought a pint instead of a cup and ended up using a little more at the end.

The original recipe used sherry and some other recipes use cognac. I like cognac in this dish vs. sherry but if you want to stay true, use sherry. 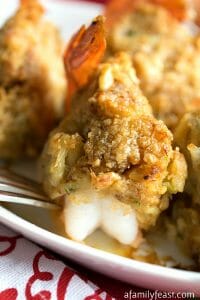 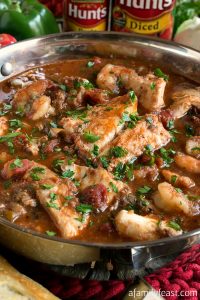 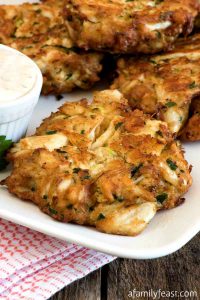 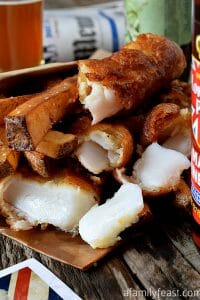