Chicken a la King has tender chunks of chicken, mushrooms, and vegetables in a rich and creamy sauce, served in a puff pastry shell – just like Grandma used to make!

Chicken a la King is one of those delicious comfort food classics that reminds me of my childhood. It’s exactly the type of meal my parents often served – wholesome, hearty, easy, creamy, delicious – and a great way to feed a hungry crowd. (After all, I was one of six kids in the family!)

It’s the same for my husband Jack.  But he recalls learning how to make Chicken a la King during a commercial foods cooking course he took back in high school. (He was a great cook even back then – and won an award for making the best version of Chicken a la King in class!)

Fast forward to today, and Chicken a la King is still a dish that everyone loves.

What is Chicken a la King?

It’s a dish made with cooked chicken meat (traditionally breast meat) in a rich and creamy sauce with vegetables. It’s often served over puff pastry, biscuits, noodles or rice.

Chicken a la King dates back to sometime between the 1880’s and the 1920’s – when several different chefs claimed this delicious recipe as their own.

Regardless of who created Chicken a la King, it became widely popular in the 20th century – particularly in tough economic times. It’s a relatively inexpensive recipe to prepare, and it is filling – so a portion goes a long way!

Why you’ll love it

Cook the chicken ahead of time  – up to 2 days in advance. You can also dice up the onions and leeks and refrigerate until you are ready to prepare the dish.

How do you make Chicken a la King?

Scroll below to the bottom of the recipe card to the watch our video, showing exactly how we make Chicken a la King!

How do I reheat the leftovers? We reheat our leftovers in the microwave – being careful not to overheat the sauce. (If the sauce overheats, the cream may separate and, while you can still eat it, the sauce won’t be as thick and creamy.)

Can I freeze the leftovers? We personally don’t recommend it. Most cream sauces like this will separate once frozen and thawed.

This post originally appeared on A Family Feast in October 2018. We’ve updated the post but the delicious recipe remains the same!

Cooking time listed assumes you will be cooking a chicken from scratch.

5 cups cooked* chicken meat (use already cooked rotisserie chicken, or if poaching the chicken from scratch, buy ingredients below)

*If cooking a chicken from scratch

If making the chicken from scratch, place whole chicken in large stock pot along with neck, onion, celery, carrots, garlic, parsley, salt, peppercorns and bay leaves and cover with water. Bring to a boil and reduce to a simmer and cook two hours. Strain stock to be frozen or used in other recipes. Pick meat from chicken and discard remaining solids. Cut chicken into bite-sized pieces and refrigerate until needed. Should yield about five cups.

If using cooked rotisserie chicken, remove meat from bones and refrigerate until needed.

Bake the pastry shells according to the box directions and set aside. They bake at 425 degrees F for 18-20 minutes. Once cooled, poke out top and discard. Or serve on top after ladling in the finished a la King.

Place two cups of dried mushrooms in a small glass or metal bowl and cover with two cups of boiling water. Cover with plastic wrap and let sit 30 minutes while you prepare the other ingredients. After at least 30 minutes, strain and discard liquid. Once cool enough to handle, grab handfuls of the now reconstituted mushrooms and squeeze out as much liquid as possible. Set aside for next step.

In a medium to large Dutch oven or nonstick pot, heat 4 tablespoons of butter over high heat. Once melted, add the squeezed-out sliced dried mushrooms along with sliced fresh mushrooms and saute for 8-10 minutes until nicely browned but not starting to stick and burn. Remove to a bowl.

Reduce heat to medium high and add the remaining 6 tablespoons of butter and once melted, add the onions and leeks and saute for three minutes.

After three minutes add the sherry and lemon juice and deglaze the pan. Once the liquid has evaporated, lower heat to medium and add the flour and stir to combine. Cook this mixture for three minutes. Whisk in the heated cream and heated milk after the three minutes.

Place the two egg yolks into a medium bowl and slowly whisk in about two cups of the cream mixture, being careful to add slowly. This is called tempering the eggs.

Whisk the tempered eggs back into the mixture. Keep the heat on medium and never let it come to a bubble.

Stir in the salt, pepper, nutmeg, mustard powder, peas and pimentos along with the cooked chicken and cooked mushrooms.

Stir and once hot, remove from heat and taste. At this point, add more salt if needed.

Serve in and over the baked pastry shells.

Featured in This Chicken a la King recipe 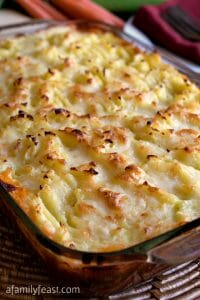 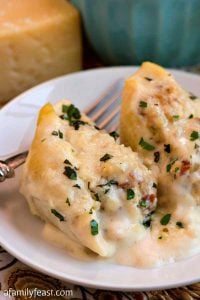