A delicious beer-infused spin on the classic duck a l’orange recipe.

Tender and juicy roasted Orange Ale Roasted Duck with a rich and delicious pan sauce. Make this for Christmas or any special meal!

Hi everyone – it’s Jack.  Anytime we go out to dinner – if I see duck on the menu – I order it. Duck is one of my favorite meals but (believe it or not) I never tried making it at home. That is, until we made this fantastic Orange Ale Roasted Duck recipe.

Many people prepare duck for Christmas dinner, but this Orange Ale Roasted Duck would also be suitable for any special meal year-round. It’s not difficult to make, but there are a number of steps to follow – so save this recipe for a special occasion.

The flavors of orange and duck are a great pairing. Duck is notorious for its richly-flavored meat, and the bright citrus flavor of the oranges balance and complement that richness.

How to do you make Orange Ale Roasted Duck?

Our Orange Ale Roasted Duck is made with a whole Peking duck, which we bought frozen at our local supermarket.  (See the Notes section below the recipe for additional duck-buying tips.)

Before you begin – you should know that the duck breast and the leg/thigh portions of a duck need to cook to different internal temperatures. (The legs and thighs need to cook to 165 degrees F and the breast to at least 135 degrees F for medium rare, or longer for medium.)

Often times at restaurants, the chefs will simply roast the entire duck to 165 degrees – then you wind up with dried out duck breast meat. To accommodate these different cooking times, you’ll notice that our recipe instructions below will have you flip the duck halfway through the roasting process so that the breast is protected while the legs and thighs have a chance to cook in the direct heat of the oven.  (Alternately, you can cut the legs, thighs and wings off the breast and cook them separately – see the Notes section below for information about that approach.)

Because duck is so fatty, you’ll want to trim off any excess fat from the bird and pierce the skin before roasting. (But save those duck fat trimmings – use it to make these fantastic Duck Fat Fries!) You’ll also blanch the duck in water for about ten minutes – which also helps release some of the fat.

Next, you’ll season your duck with a wonderful spice rub made with juniper berries, celery seeds, black peppercorn, kosher salt, cumin, paprika, marjoram and thyme. The duck is also stuffed with fresh orange wedges, onion, and fresh thyme, then roasted over a bed of vegetables and more orange wedges.

Halfway through the roasting process, you’ll flip the duck on the roasting rack, then pour into the roasting pan a reduced stock made with the duck’s neck bones, orange juice, Blue Moon Belgian White, and other vegetables and herbs. This liquid helps flavor the duck as it finishes roasting, plus it adds moisture to the oven.

Once your Orange Ale Roasted Duck is cooked through, you’ll place it under the broiler for just a few minutes to crisp up the skin. Then, as it rests, you’ll make a delicious orange-infused pan sauce that gets served over slices of the duck.

Yes – this Orange Ale Roasted Duck takes some time to prepare. But special occasions deserve a special meal and this recipe fits the bill.

You may also enjoy:

Your duck is most likely frozen and will take 2-3 days under refrigeration to thaw.

Nip off the wing tips and place on a medium sheet pan along with all of the gizzards and the neck but NOT the liver. Discard the liver.

Remove the large deposits of fat on each end of the duck and save to make these Duck Fat Fries if you wish.

Place the duck in a medium pot and add enough water to cover by an inch. Then remove the duck, place the water on to boil and once boiling, carefully add the duck back in and boil ten minutes. Use a fine skimmer to skim off any foam.

Put a colander over a large bowl or pot and pour the pot of water and duck into the colander, being careful not to damage the skin. Save the water, it will be needed later.

Place a rack in the bottom of a roasting pan or Dutch oven and place the duck over the rack breast side up and hold for another step.

Add half the carrot, half the celery stalk and half the medium onion to the sheet tray with the neck, wing tips, heart and kidneys. Drizzle on a little olive oil then sprinkle on a little salt and pepper and roast 60 minutes, tossing once half way through.

After 60 minutes, place the cooked bones and vegetables on the stove top over medium high and deglaze the pan with the bottle of the Blue Moon beer. Let almost all of that liquid evaporate as you deglaze then pour everything in a medium pot.

Measure five cups of the water you used to blanch the duck and add to the pot with the cooked meat and vegetables as well as the parsley. Keep the remaining water aside.

Bring the pot of meat and vegetables to a simmer (do not let it boil) then simmer 1 ½ – 2 hours or until there are two cups of liquid in the pan. Set aside on the back of the stove for now. If too much liquid evaporated, add more of the reserved water.

While the stock is cooking, make the spice rub. Place the juniper berries, celery seeds, peppercorns and salt in a mortar and with a pestle, grind fine. Stir in the cumin, paprika, marjoram and thyme and again with the pestle, grind fine. (you could also use a spice grinder if you have one).

Put the duck in the roasting pan and add remaining carrot, remaining celery, and the remaining onion (holding back one onion wedge), all coarsely chopped and placed around the outer edge. Place the orange pieces over the vegetables, reserving one orange wedge.

Stuff the cavity of the duck with reserved onion, reserved orange and the fresh thyme. Pull up on the pointy flap, fold over and secure to the duck with a trussing needle. Fold under the flap at the other end which is the neck skin.

Pour in the ½ cup of orange juice around the outer edge.

Using a sifter, sift the spice blend over the breast, legs and thighs. The coarse pieces left in the sifter should be sprinkled over the vegetables.  Try to sift the fine ground spices evenly so the breasts brown evenly.

Place uncovered in oven for 15 minutes then reduce the oven temperature to 350 degrees F.

After 45 minutes, remove from oven and remove duck to a platter. Add the reduced two cups of broth that you have been cooking on the stove along with all of the solids in the pan. Place the duck back on the rack breast side down. If you are worried about lines from the rack marring the breast, fold over a piece of parchment onto the rack first.

Roast for 45 more minutes breast down to fully cook the legs and thighs.

After 45 minutes, remove from oven and place back breast up. If the spices all collected in one area, use a brush to even it out so that the breast browns evenly with no blotchy patches. If the liquid in the bottom has evaporated, use more of the reserved water.

Roast for 15-20 minutes longer until a probe thermometer inserted into the thickest part of the thigh reaches 165 degrees F. Try not to touch bone.

Turn off oven, turn on broiler and raise duck to an upper rack and broil to crisp skin, maybe 5-10 more minutes. Watch closely and remove before it gets too dark.

Once done, remove to a platter and cover loosely with foil.

While the duck is resting make the sauce.

Bring the roasting pan contents to a boil and reduce to a fast simmer adding more of the reserved water if needed. Simmer until the liquid has reduced to about two cups, scraping the bottom and sides as it reduces.

Pour into a strainer over a saucepan and strain out and discard all solids. Skim off any fat floating on top.

Stir in the orange liquor, orange juice, orange zest, thyme and simmer while you make the roux.

In a small saute pan, melt butter over medium heat and add flour. Cook for about two minutes then gradually add to the simmering sauce until the sauce is at your desired consistency.

Taste sauce and season if needed.

To serve, using a sharp knife, remove leg/thigh portion, then carve each breast off and slice on the bias into slices. Serve one breast and one leg/thigh portion to each person with the sauce served on the side.

Ducks are available pretty much everywhere now, from big box stores to your average supermarket. For this dish you want to find one of two breeds, either a Peking duck (also known as a Long Island duck) or a Muscovy duck, female if possible. Stay away from Mallard for this dish. The duck I bought frozen at my local supermarket was a Peking duck from Maple Leaf Farms. It did not say on the package which breed of duck was used, but when I went to the manufacture’s web site, it stated it there. There was a sauce packet in my duck as well which I disposed of and made my own.

Alternate method to cook breast separate from leg/thigh…To get your breast meat medium rare and the thigh/leg portion to 165 degrees F, you will need to carve off the leg/thigh portions and cook them separately. To do this, remove the leg/thigh portion before roasting and place on the pan with the wing tips, neck, vegetables, etc. and roast for the full hour, turning once. Then remove the leg/thigh portions from the pan before deglazing and add them to the roasting pan with the uncooked duck. Now roast as the recipe describes, however the leg/thighs now have an hour head start. With this method, the total cooking time will be much less so no need to turn the duck over. Roast as described but check the breast internal temperature at the 45 minute mark and gauge how much longer it needs to reach 135 degrees F. Then broil as described.

I cooked two ducks, one with each method. The second method with the leg/thighs cooked separately cooked in about an hour to get the breasts medium rare. The method in this recipe where the duck is left whole, took about two hours.

Featured in this Roasted Duck recipe 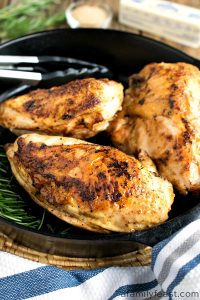 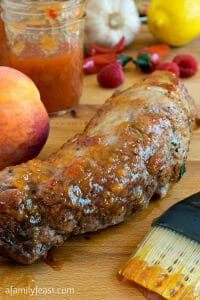 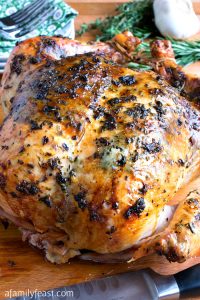 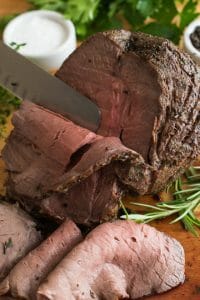 Top of the Round Roast