END_OF_DOCUMENT_TOKEN_TO_BE_REPLACED

An incredibly flavorful shredded beef taco from the Jalisco region of Mexico. 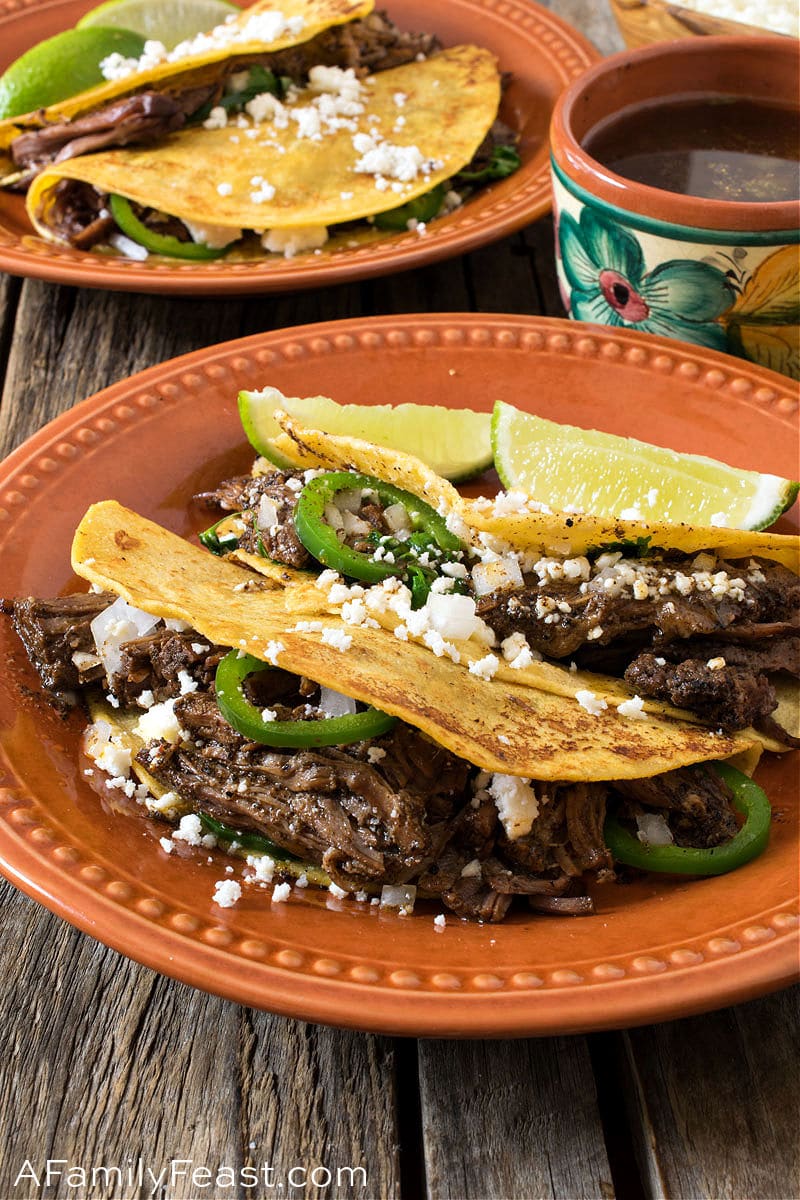 I’ve mentioned before that both Jack and I joined a number of Facebook groups all centered around recipes from different cuisines. In addition to the Italian and Polish groups we follow, we recently joined a Mexican recipe group.

At least once a week, someone shares a photo and recipe of the Beef Birria Tacos they’ve made – and every single time, it gets us drooling!

Birria is a Mexican dish originating from the state of Jalisco along the west central coast of Mexico. Jalisco is best known for mariachi music and tequila – and I suspect Birria recipes too!

Birria is cooked as a stew – and traditionally it is made with goat or lamb, but home cooks prepare this delicious dish with beef as we did today.

It can be eaten as a stew, or you can shred the stewed meat and serve it as Beef Birria Tacos. 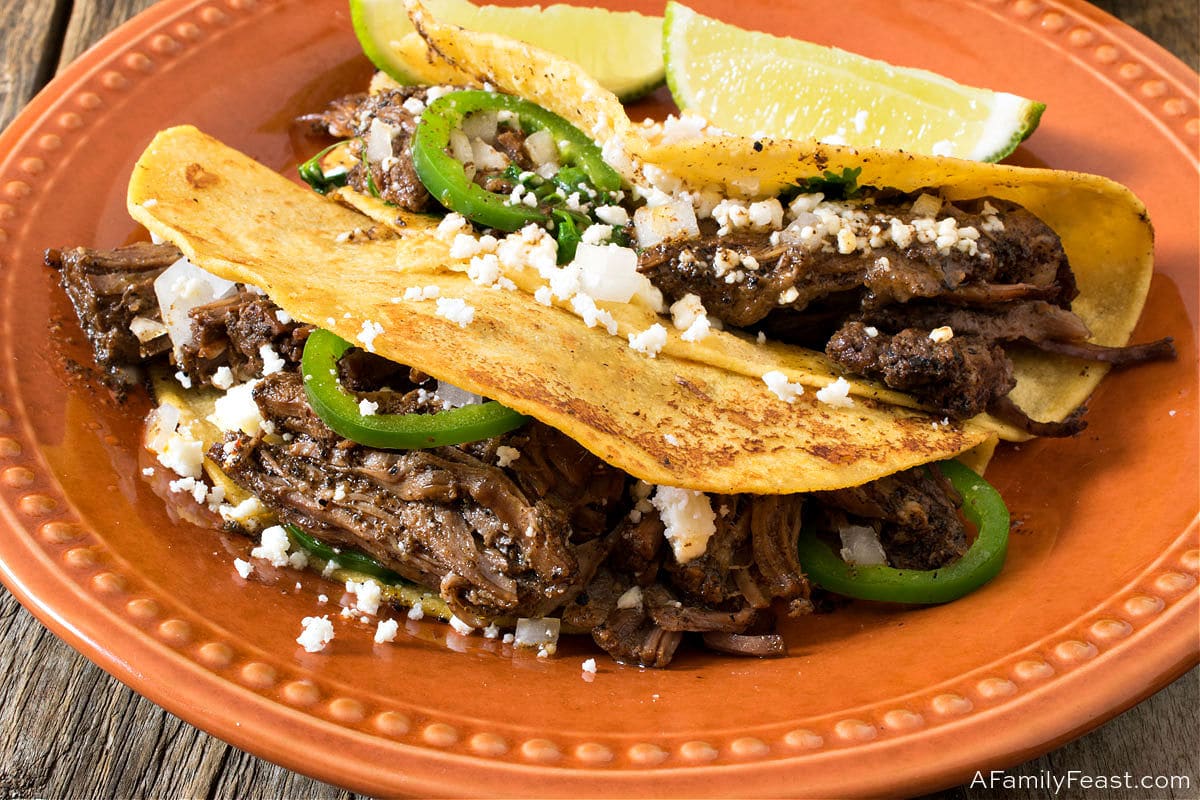 How do you make Beef Birria?

We use both beef chuck roast (cut into pieces) as well as a whole beef shank for our taco recipe. Once cooked, beef chuck is tender and flavorful, and the bone in the shank gives this dish additional flavor.

The beef is first marinated overnight in a mixture made with dried Guajillo and California peppers, fresh plum tomatoes, canned chipotle in adobo, garlic, Mexican oregano, cumin and apple cider vinegar. This spicy mixture infuses the beef with fantastic flavor.

Then, the beef is oven-braised in beef stock with onions, cinnamon sticks, bay leaves, and minced fresh garlic. After four hours of cooking, the beef is super tender and even more flavorful.

Shred the beef with two forks and place into a serving bowl. 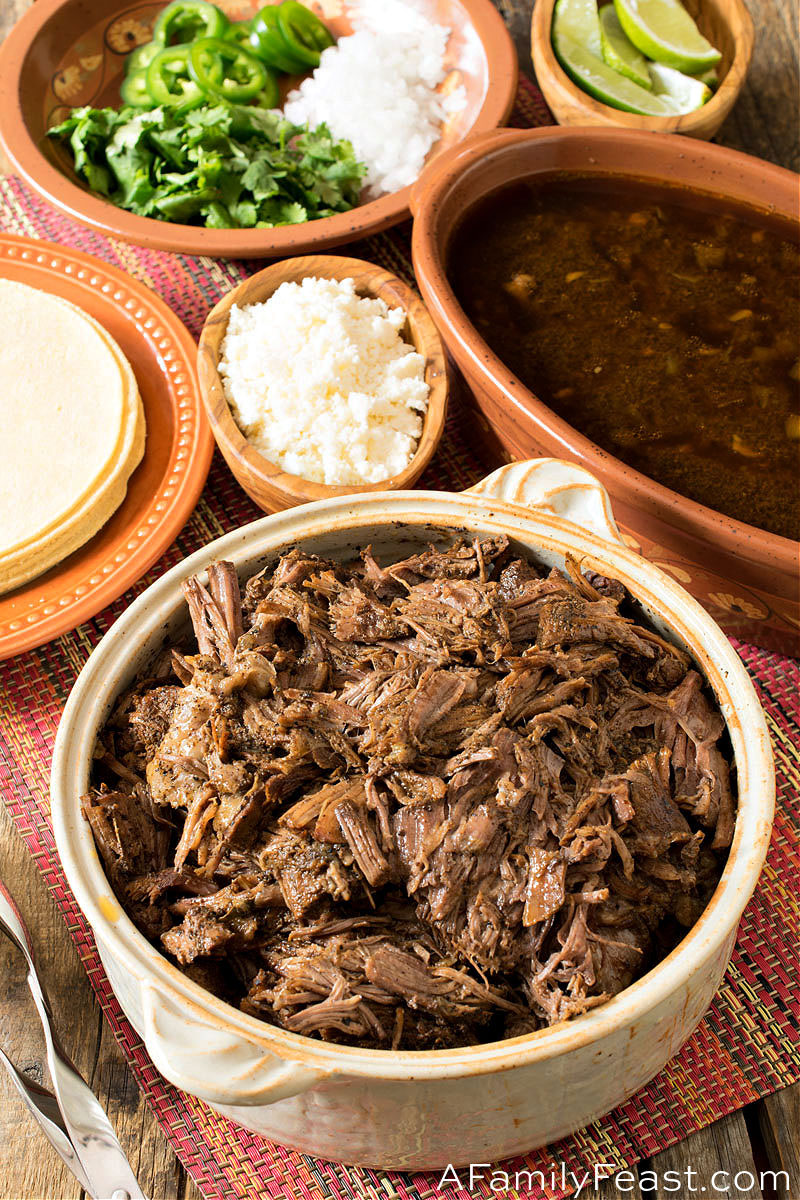 We think Beef Birria Tacos are the most delicious served on lightly fried corn tortillas, but you can serve on flour tortillas if you prefer.

Heat a flat grill pan skillet, then brush it with some of the reserved fat from the braising liquid. Briefly dip each corn tortilla in the bowl of braising liquid – just enough to moisten it – then fry each side on the skillet.

While the tortilla fries, top with shredded beef, Cotija cheese and other toppings such as cilantro, jalapenos, and finely diced white onion. Fold in half and serve with a wedge of fresh lime on the side. Also serve your Beef Birria Tacos with individual bowls of the braising liquid on the side.

Then, to eat, squeeze fresh lime juice over the taco and dip in your bowl of braising liquid before each bite. (Beef Birria Tacos are a little messy to eat – but well worth it!) 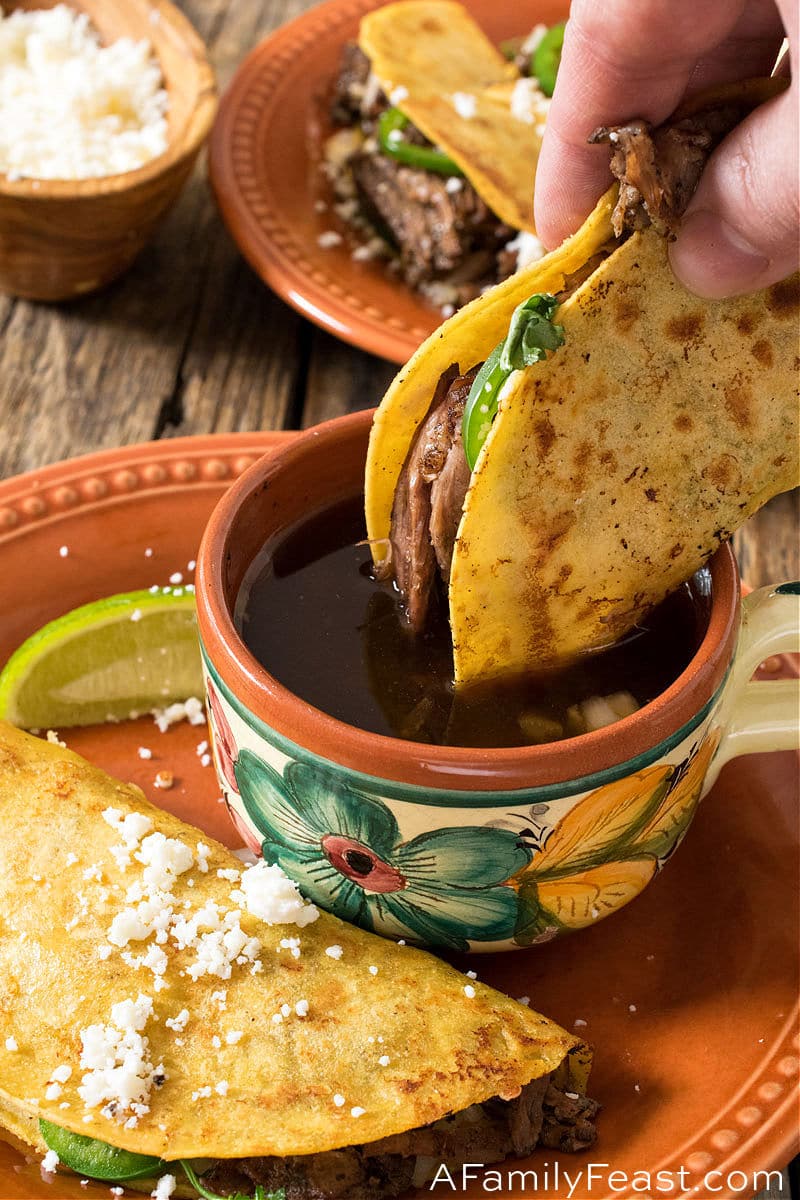 Make these tacos spicier (or not)

Our Beef Birria recipe is a less-spicy variation of the original. We only added half a can of chipotle in adobo in the marinade, and both the Guajillo and California peppers are not overwhelmingly spicy as well. You can make your tacos spicier by using the entire seven-ounce can of chipotle in adobo or by swapping in dried Ancho or Pasilla chiles instead.

You may enjoy these other taco recipes:

20 6-inch corn tortillas (you could also use flour tortillas)

Leave shank whole and cut the chuck into large pieces. Sprinkle with salt and pepper and place in a two-gallon bag or container. If you do not have a two-gallon bag, you could split between two one-gallon bags.

Heat one cup of water in a small sauce pan.

Remove and discard stem and seeds from peppers then lay out dry on the sheet tray.

Cut tomatoes in half the long way and lay cut side up on same sheet tray.

As soon as the peppers come out of the oven, place in the hot water and cover the sauce pan with a lid and let steep for 15 minutes.

After the peppers steep, place the peppers with their liquid, the charred tomatoes, the chipotle in adobo, garlic, oregano, cumin and vinegar into a blender and puree. Cool to room temperature.

As soon as the mixture cools, pour over the beef and refrigerate overnight.

Add stock, the marinated beef and everything from the marinade bag into the Dutch oven and bring up to hot on the stove top.

Cover and place in the oven for four hours, untouched.

After four hours remove the beef and shred and discard any marrow bones, cinnamon stick and bay leaves. (Do not discard the liquid)

Skim the fat from the liquid and save both the fat and the liquid.

While the beef is cooking, prepare all of the serving ingredients.

If your corn tortillas are dry, wrap in a wet paper towel and microwave for 30 seconds to a minute.

To serve, heat a large flat grill pan over medium heat and brush on some of the fat you skimmed off of the cooking liquid.

Then dip corn tortillas in the liquid then place onto the pan.

Top each with about 2-ounces of shredded beef, the Cotija cheese, cilantro leaves, diced onions and a few jalapeno slices and cook to brown. Fold in half and serve with lime wedges and little bowls of the cooking liquid for each guest.

Dip folded taco into the liquid before eating.

Assuming a portion is two tacos, this recipe should yield approximately 20 tacos and serves 10.

**If you can’t find Guajillo peppers, use either Ancho or Pasilla. 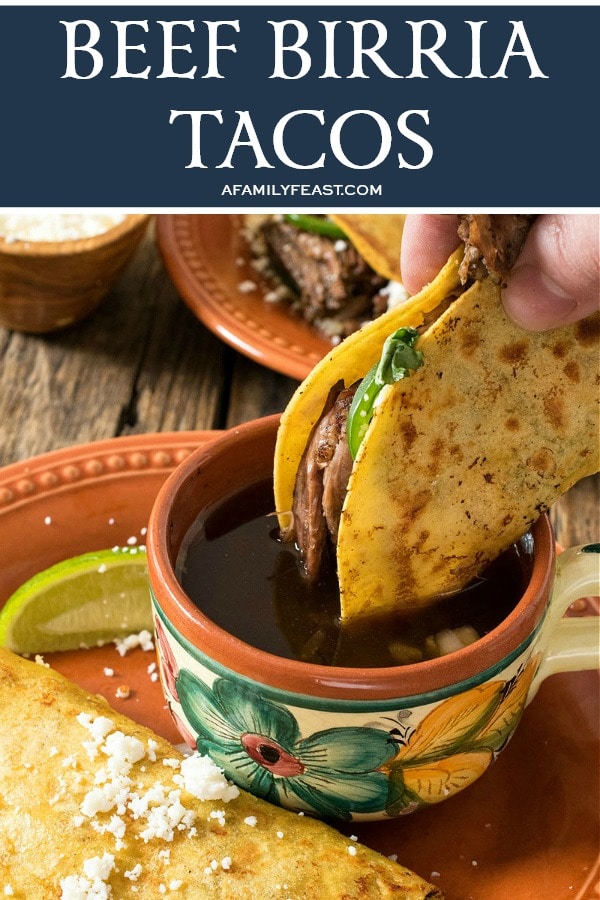 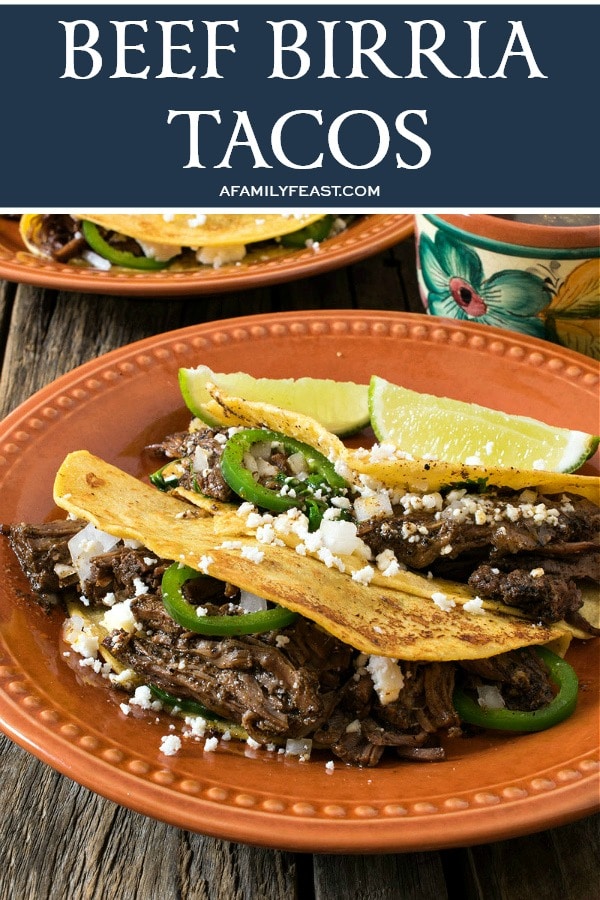 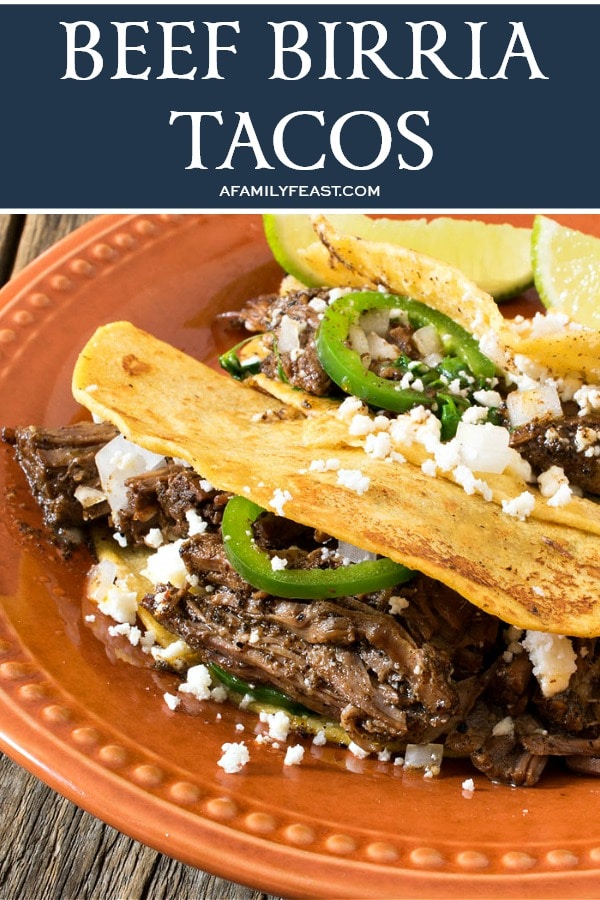