END_OF_DOCUMENT_TOKEN_TO_BE_REPLACED

Easy and delicious - and no need to make a trip to a specialty market for the ingredients! 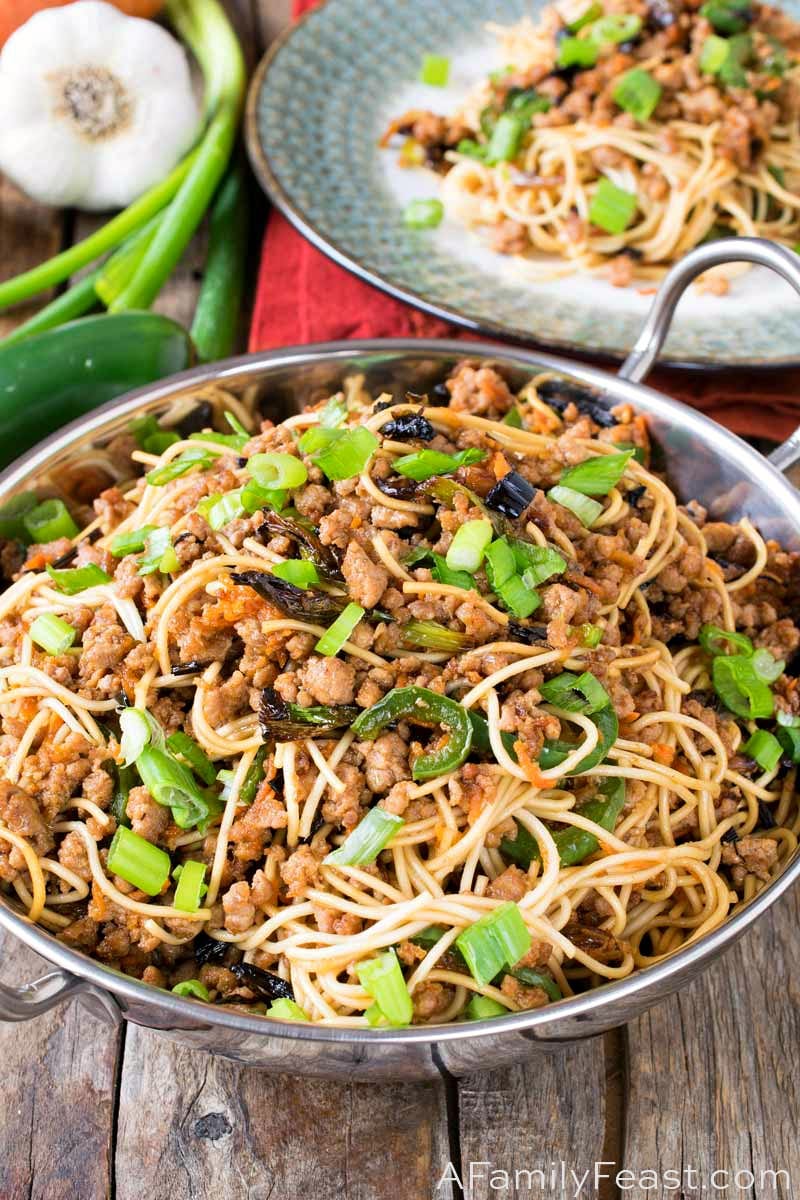 A few weeks ago, the meat case at our local supermarket was pretty bare – with the exception of some ground pork. I grabbed a few packages for our freezer – knowing that this delicious Scallion Noodles and Pork recipe would be a great pantry meal in the weeks ahead.

We first made a version of this easy recipe a couple of months ago, after spotting it in a recent issue of Christopher Kimball’s Milk Street Magazine. It was a flavorful home version of a popular Shanghai-inspired street food noodle dish called Cong You Ban Mian which doesn’t typically include any meat.

After reading through the recipe, we particularly liked that it could be made with ingredients that are easy to find at the supermarket – so no trip to a specialty Asian market is required. 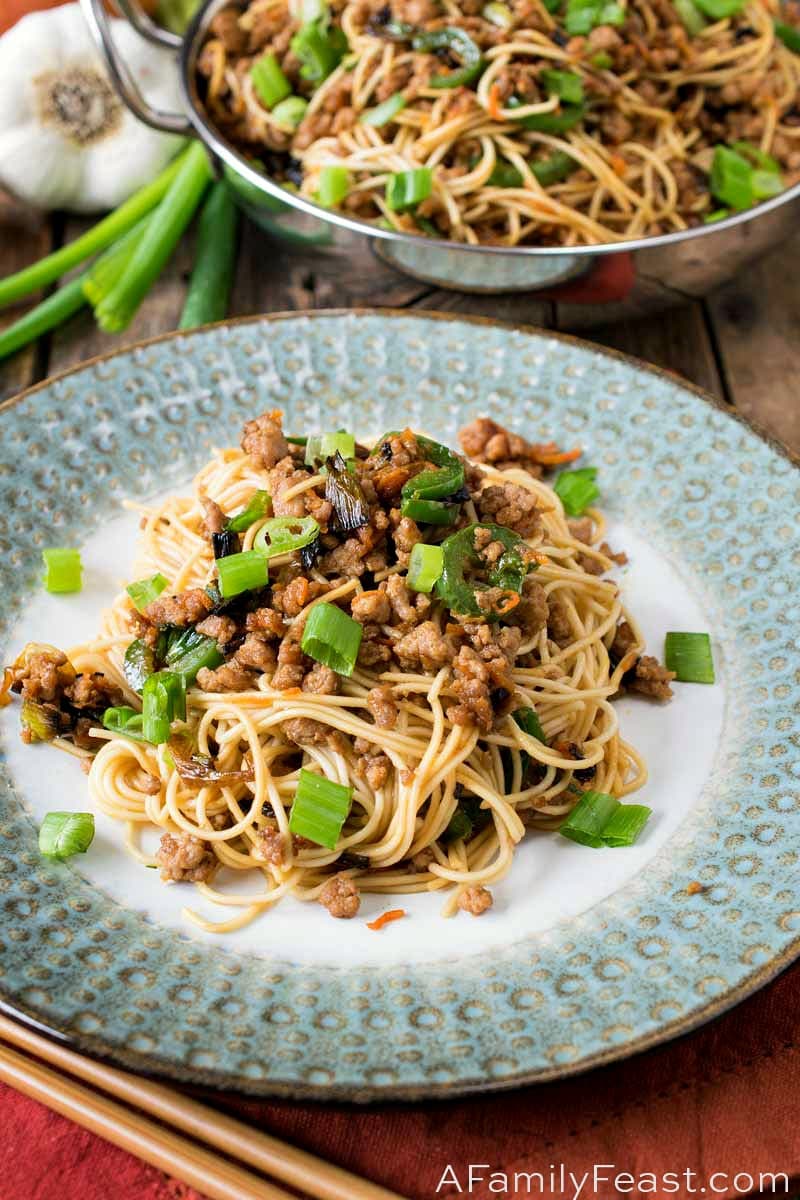 How do you make Scallion Noodles with Pork?

The secret to this recipe is to cook sliced scallions in very hot oil until browned and charred. The scallions impart fantastic flavors into the oil – which then infuses the rest of the dish.

We made several changes to the original recipe below – including the addition of finely shredded carrots and minced fresh ginger which added additional body and flavor to the dish. The carrots and ginger are cooked in that scallion oil, along with minced fresh garlic. We also cooked some sliced jalapenos in with this mixture for some gentle heat – but you can leave that out if you prefer.

Then we browned the ground pork – cooking until it became very crispy and golden. We used a well-seasoned wok as the cooking vessel for this recipe – that would allow the pork to brown over high heat. (If you don’t have a wok, select a large cast iron pan.) 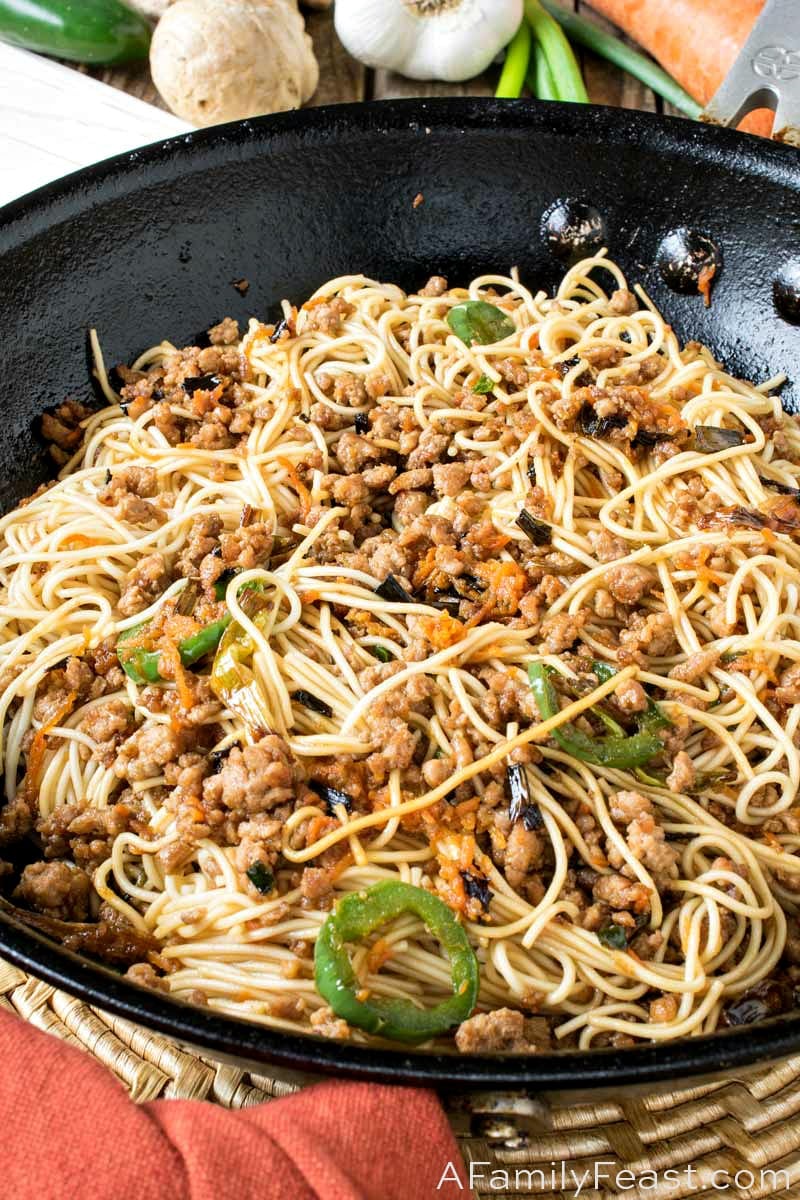 We also adjusted the proportion of noodles and meat – adding more ground pork, but mostly because we wanted to use the full pound of meat we had thawed. Then we de-glazed the pan with a simple soy sauce-sugar mixture, scraping up the bits of charred meat and vegetables on the bottom of the pan. (We cut way back on the amount of sugar in the original Milk Street recipe. This better suited our taste buds, but you could certainly adjust the sweetness of the sauce to your own liking.) 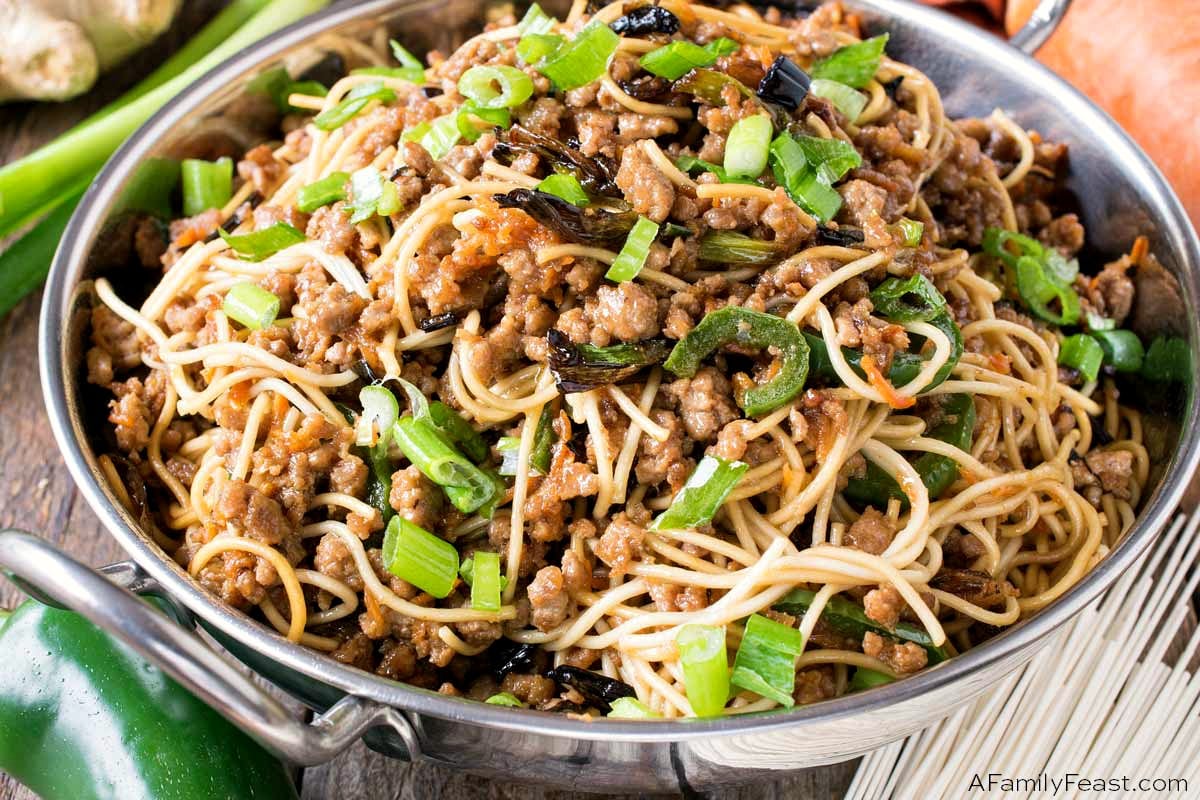 What kind of noodles should I use to make Scallion Noodles with Pork?

The recipe calls for an Asian wheat noodle – and we had something similar to these on hand which we found at our local supermarket. They cooked up very similar to a thin spaghetti – so while not traditional, you could use that in a pinch.

You may enjoy these other Asian dishes:

In a pot of water, cook noodles but remove and drain while they still have a bit of chew to them. This type of noodle cooks very fast so stay with them. Immediately rinse under cold water and hold until the end of the recipe.

Prepare all ingredients, cut and measured, before beginning.

In a heavy steel wok (not nonstick), place 1/3 cup of the oil and bring heat to medium high.

Once shimmering hot, add scallion whites and cook until brown and charred, about 5-7 minutes. Use a slotted spoon and remove to a bowl.

Add half the scallion greens and again cook until brown and charred, about 4-6 minutes. Use a slotted spoon and remove to the same bowl. Save rest of greens for garnish.

The whites and greens will cook down to almost nothing but will impart a great deal of flavor into the oil.

Add the ginger, garlic, jalapeno and carrot and cook for about three minutes until starting to brown. Add to the same bowl.

Add the remaining two tablespoons of oil and raise the heat to high.

Once hot, add the pork and cook to remove pink, but continue to cook until the liquid evaporates and the meat starts to brown. Keep scraping the bottom. Eventually the pieces will stop sticking and begin to char and brown. The whole process for the pork is 10-15 minutes depending on how hot your wok can get. You want the pork to be heavily browned.

Lower heat to medium and add the sugar and soy, scraping up any bits from the bottom.

Add the bowl of cooked vegetables and the rinsed noodles (if the noodles are stuck together, rinse again before adding) and toss to heat through.

Remove from heat and serve with the remaining scallion tops (sliced or chopped). 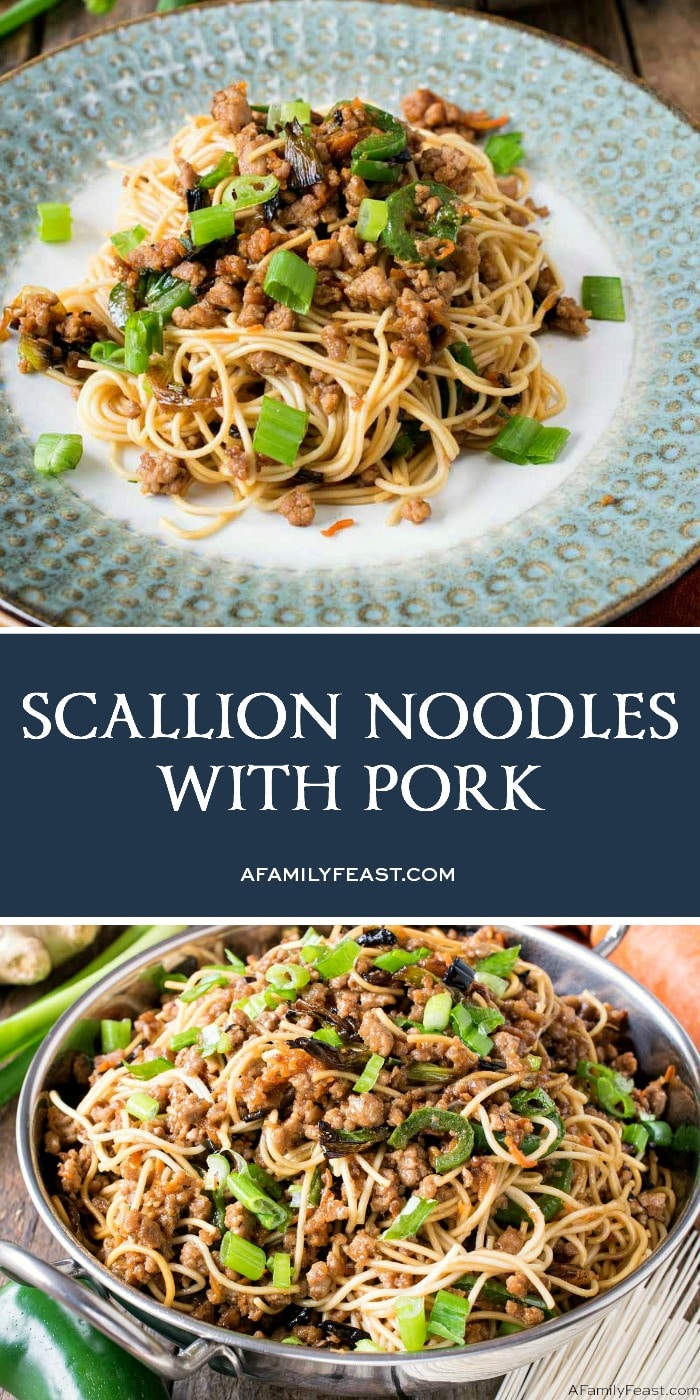 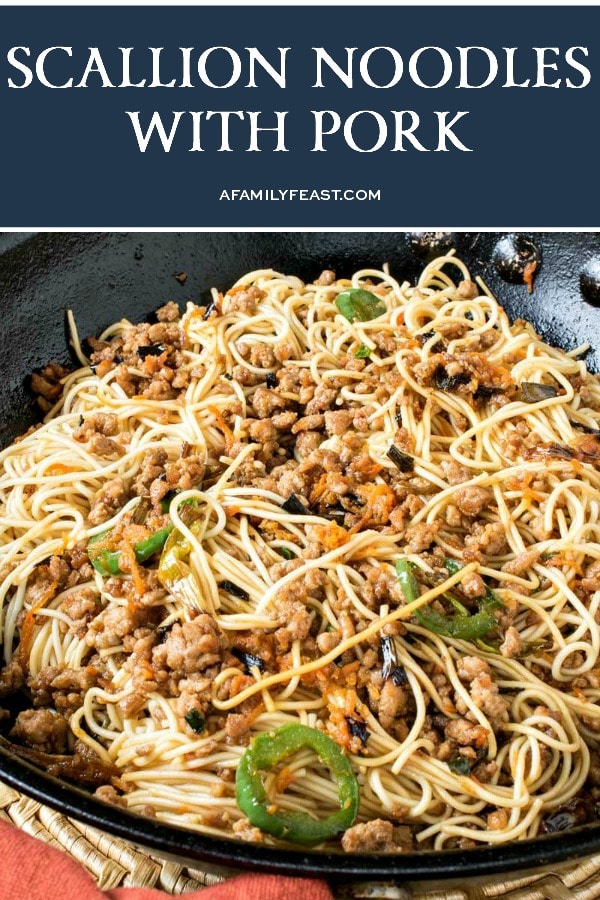 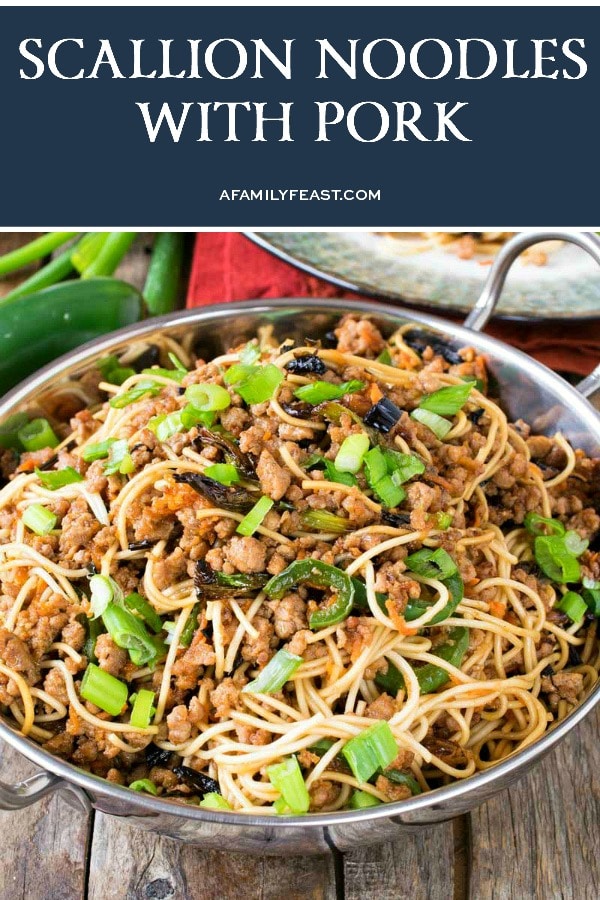 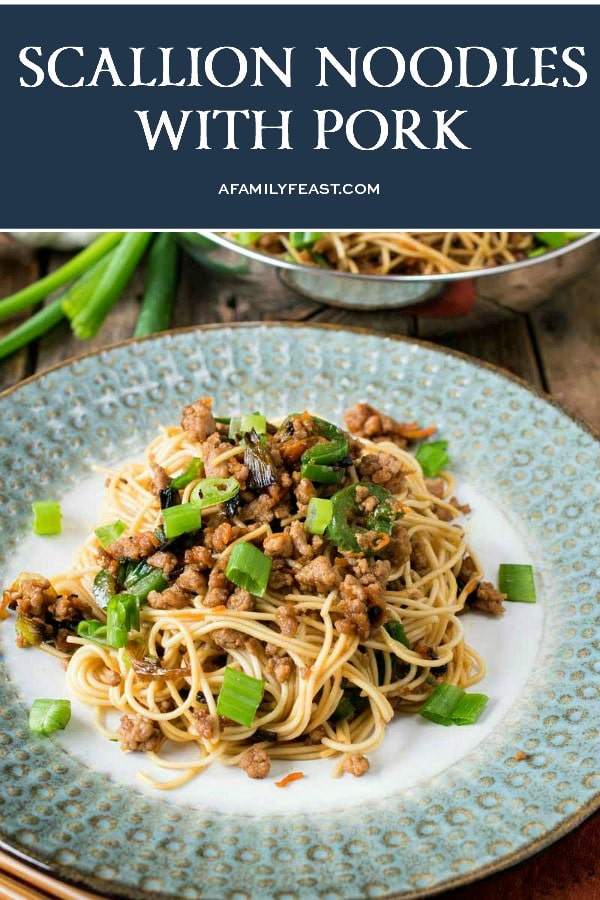