This Rosemary Sea Salt Keto Bread has all of the same flavor and texture of real bread, but with a fraction of the carbs.

Hi everyone – Jack here. I’ve spent the last month or so trying to make a really good, nicely textured Rosemary Sea Salt Keto Bread, and after four attempts, I’m proud to say that I finally nailed it with this recipe.

I LOVE bread. But eating lower-carb these days has meant that most breads are (sadly) off limits for me. I made this keto bread recipe before, as well as this 90-second keto bread too, and they were good. But this Rosemary Sea Salt Keto Bread checks all of the boxes for me in terms of taste, texture and making me feel like I’m eating a ‘real’ slice of bread.

Now, I do want to point out that this Rosemary Sea Salt Keto bread is NOT gluten-free, but it is low in carbs at 1.4 net cars per slice.

How do you make really good Keto Bread?

Most keto bread recipes out there rely on low-carb flours and xanthan gum powder as the base in their recipe – and ours does too. But – and here’s the trick – I  also added wheat gluten to this recipe which adds that soft, bread-like texture that everyone knows and loves.

Our Rosemary Sea Salt Keto Bread is also a yeast bread (which also contributes to that wonderful texture) but don’t let that scare you off. This is still a very easy and quick bread to make.

Today’s keto bread recipe uses ingredients that are easy to find online as well as in some well-stocked grocery stores including golden flaxseed meal, almond flour, oat fiber (don’t confuse that with oat flour), vital wheat gluten, and monk fruit sweetener (you could also use Stevia if you prefer). Once you have these ingredients in your kitchen pantry, the sky is the limit in terms of all of the different kinds of keto bread you can bake at home.

We flavored our Rosemary Sea Salt Keto Bread with (as you can tell from the name) fresh rosemary and coarse sea salt. Both give this soft, delicious bread some really fantastic flavor.

This Rosemary Sea Salt Keto Bread is great for sandwiches, toast, or simple bread and butter.

You may enjoy these other Keto recipes:

Oil and coarse sea salt, for top of baked bread

Dissolve sugar in warmed water and add yeast. Set aside to bloom.

In the bowl of a stand mixer with the paddle attachment, add eggs and beat five minutes on medium.

Once the yeast has bloomed (froth formed on the top of the water), alternate adding the yeast mixture and the dry mixture until everything is in and mix on medium low for eight minutes. (The dough needs to be kneaded this long to develop the gluten.)

Spray a piece of plastic wrap and place over the top of the pan so the dough doesn’t stick to the plastic.

Proof for 1 ½ to 2 hours until doubled in size.

I have an oven that I can set to 80 degrees F so I placed the dough in at that temperature then microwaved a 2-cup measuring cup filled with water until it was boiling hot and placed it in the oven with the dough. Then every thirty minutes I reheated the water until the dough doubled in size and was cresting the edge of the pan. In this humid environment, my dough rose in one hour and 45 minutes.

You could also just use the inside cavity of your microwave with a container of hot water reheated every 30 minutes. Either have a tea kettle going to fill the cup or remove the dough and microwave the water then place the dough back in.

Preheat oven to 375 degrees F with rack in center.

Bake for 30 minutes until golden brown and when poked with a probe thermometer, will register between 190-200 degrees F.

Remove from pan while hot by running a knife down each side to loosen, then cool on a rack. While hot, brush the top with olive oil and sprinkle on sea or kosher salt.

*Note: The sugar in this recipe is necessary to develop the yeast. The monk fruit sweetener is used to sweeten the bread and will not work in the initial blooming of the yeast. 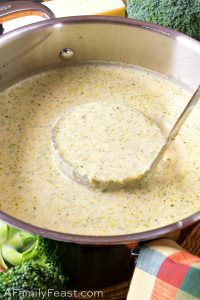 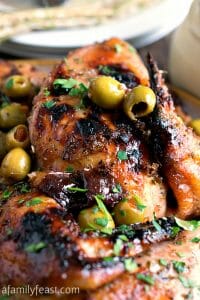 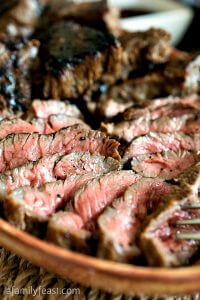