½ cup Merlot or Burgundy or other strong red wine

Trim most of the fat from the brisket, leaving some still attached. Some briskets already come trimmed.

In a sauce pan, place wine, vinegar, water, sugar, garlic, salt, mint, tarragon, basil, oregano and black pepper and bring to a boil. Lower to a fast simmer and cook for five minutes. 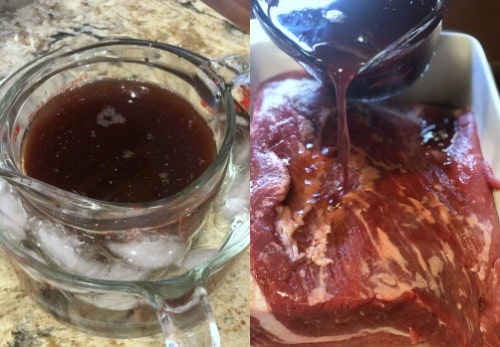 Place the beef in a casserole dish or two-gallon zip bag and pour over the cooled marinade, including the sediment that collected on the bottom.

Refrigerate overnight or for at least six hours.

Five hours before serving preheat the oven to 350 degrees F.

Remove the beef and discard all of the marinade. Then rinse any remaining marinade off of the beef.

Pour the can of whole tomatoes and beef broth into a Dutch oven large enough to accommodate the meat. 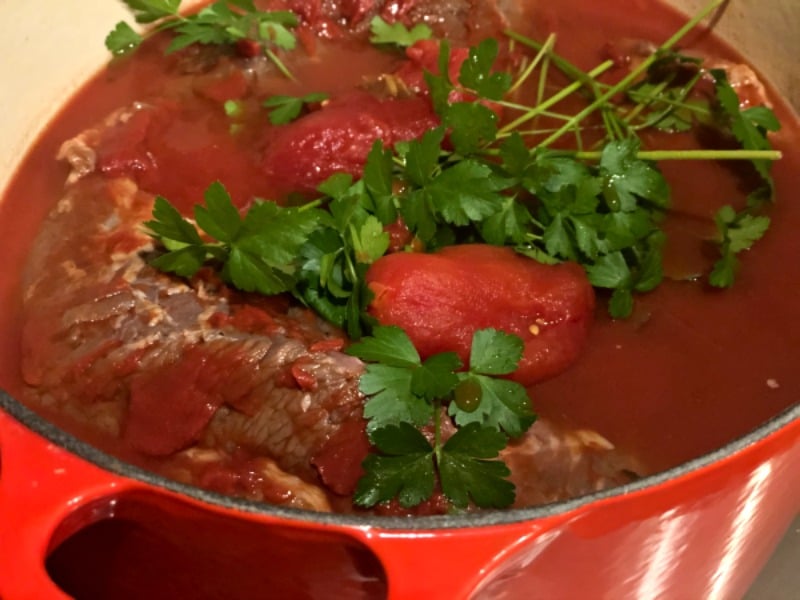 Rub the beef all over with the four tablespoons of tomato paste and lay the meat over the whole tomatoes and beef broth. Top with the parsley, cover and roast for 4 hours.

While beef is roasting cook pasta to just short of done and before draining, save three cups of the pasta water. Set reserved pasta water aside and cool the pasta under cold water and set that aside.

In a large skillet over medium low to low heat, saute onions and peppers in the olive oil with the salt and pepper covered for 20-30 minutes or until tender. Set aside to cool until later in this recipe.

After four hours, test the beef by slicing a small sliver against the grain from one end and test. If still tough, lower oven to 325 degrees F and continue to cook covered for up to one more hour. Ours took four hours and 45 minutes before I was satisfied with the texture. Check liquid at the four hours mark and if too much has evaporated, add a cup or two of water before cooking further.

Remove the beef to a cutting board and loosely cover with foil and let rest ten minutes. Discard parsley.

Pour the three cups of pasta water into the Dutch oven with the contents and cook over medium heat, scraping up the bottom. If there are burned splatters on the sides, leave them be.

Reheat the pasta in hot water, drain and add all but one cup of the sauce to the pasta. Also reheat peppers and onions and add most of that mixture also to the pasta. To make the mixture a little looser, add a little hot water as needed.

To serve, slice thick slices of the beef against the grain and serve with the coated pasta along with the remaining sauce and pepper and onion mixture.